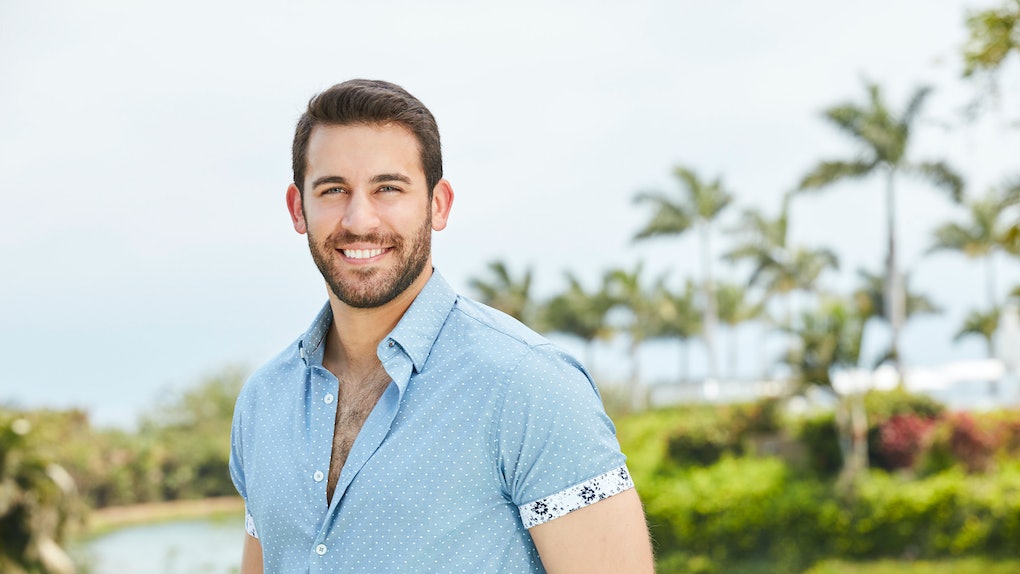 Will Derek Be The Next Bachelor? The 'Paradise' Contestant Has Fans' Support

Is there a support group for people who can't stop speculating about who the next Bachelor will be? Because if so, sign me up. While I am fully invested in the goings-on of Bachelor in Paradise, in the back of my mind, I'm calculating how the antics of the men on the beach will help determine who will become the franchise's next leading man. While there are a couple guys from Hannah Brown's Bachelorette season who seem to be clear frontrunners, recently, a fella from Paradise seems to be on the right track toward the gig. So, will Derek be the next Bachelor? He's amassing quite the fanbase.

Derek Peth first caught Bachelor Nation's eye as a contestant on JoJo Fletcher's season of The Bachelorette. While he did well during his time on the show, earning a few group date roses and standing up to the season's "villain," Chad Johnson, he was eventually sent packing from the Bachelor mansion in Week 6, inspiring a sad goodbye with JoJo and a tearful limo ride. However, he would not soon be forgotten for his charming ways, nor for inspiring tons of memes comparing him with John Krasinski's The Office character, Jim Halpert.

Not long after his Bachelor Nation debut, Derek went on to join the cast of Paradise Season 4, where he got together with fellow contestant Taylor Nolan, an alum from Nick Viall's Bachelor season. The two had a whirlwind romance and ended up getting engaged on their show's reunion special, but they called it quits in June 2018.

Considering how his last stint on the show ended up, it was a bit of a surprise to see Derek back on Paradise for Season 6, but it has been altogether a pleasant one. Right when the new season kicked off, Derek linked up with Bachelor Nation spitfire Demi, and the two have seemed cozy for the first two weeks of the show, with fellow contestants billing them as one of the most established couples on the beach thus far. However, in the Aug. 13 episode, Demi revealed to Derek that she had been dating someone else before going on the show.

The conversation was especially difficult for Demi because the person she was dating is a woman, so not only was she revealing to Derek that she had feelings for someone other than him, but she was also coming out to him. While Derek seemed surprised by the revelation, his concern seemed to be solely focused on Demi's feelings. "Thank you for choosing to talk to me about this," he told her, saying he was fine with taking things slow if she was willing to be honest with him.

As Demi told cameras afterward, his reaction to the whole thing was pretty great. While it should be the norm for people to be accepting of the sexualities of those they care about, this is not always the case, and his ability to see past his own interest in Demi to focus on her emotions really resonated with fans.

As Paradise teasers indicate, Demi's other love interest might be coming on the show soon, which sets Derek up for the potential to have his heart broken. While that would definitely be sad for him, it could also lead to other options for finding love... perhaps on his own show.

But is all this enough to boost him to Bachelor status? Though he's certainly making a case for himself — whether he's intending to or not — before his latest stint on Paradise even began, there were already some major contenders for the leading man role. Mike Johnson, Peter Weber, and Tyler Cameron — all from Hannah B.'s season — have been the big names getting tossed around for the role. However, ABC seems to be using Paradise as a tool to help decide who becomes the next Bachelor, and Robert Mills, ABC's senior vice president of alternative series, specials, and late-night programming told E! News that fans can "keep an eye" on Derek. So, it sounds like there's a chance!

In addition to all the fans (and Instagram deals, probably) he's raking in due to his fame, Derek also has a bustling professional life: He is the senior vice president of Laurel Road, a national lending and banking company, and is the co-host of The Betchelor is a Bachelor Nation recap podcast. So regardless of whether ABC is interested in Derek becoming the next Bachelor, the guy already has plenty of stuff going for him.