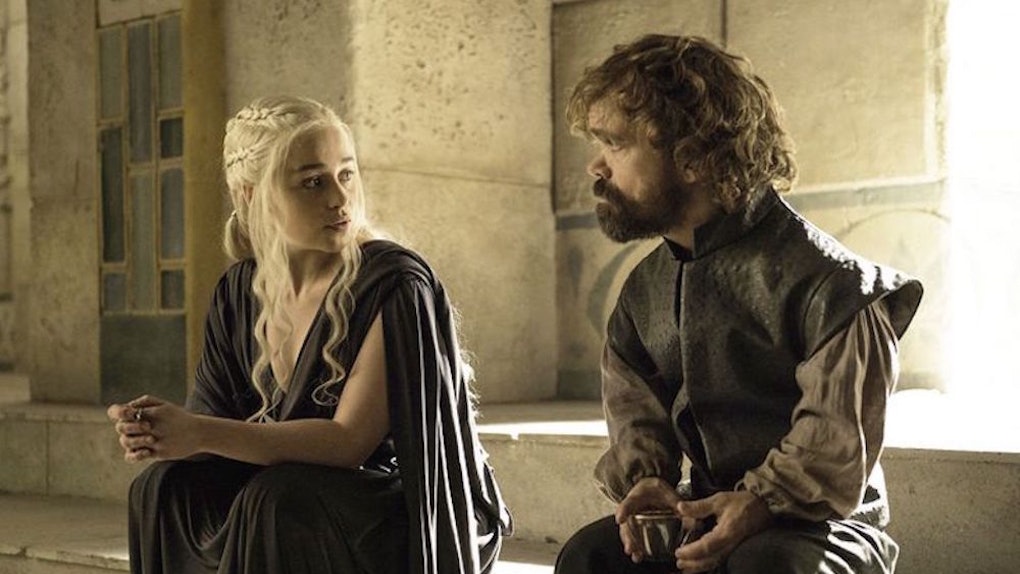 Will Dany Replace Tyrion On 'Game Of Thrones'? She Doesn't Trust Him Like She Used To

Tyrion just landed himself on Khaleesi's bad side. Just like Sansa Stark said in Season 8 Episode 1, Cersei isn't coming to Winterfell with her army to fight the encroaching White Walkers. Season 8, Episode 2 showed the aftermath of Daenerys, Jon, Tyrion, and company learning what the Stark girls knew to be true all along: no one should have ever taken Cersei at her word. Dany's anger toward Tyrion's decision to trust his sister begs the question, will Dany replace Tyrion on Game of Thrones? She clearly questions his judgment now. And Tyrion definitely believes he's going to get fired. Or killed. Whichever comes first.

If Tyrion does think he's going to lose his place as Hand of the Queen, it's because Dany gave him damn good reason to think so. After a meeting with Jaime Lannister (you know, the guy who killed her father) that didn't go as well as she wanted (surprise, surprise, Cersei isn't coming with her army), Dany yells at Tyrion for defending Jaime and for taking Cersei's word in the first place.

She cut him with the line: "Either you knew Cersei was lying and let me believe otherwise, or you didn't know at all, which makes you either a traitor or a fool," and she's justifiably angry.

"I was a fool," Tyrion responded.

"Not for the first time," Dany shot back.

"Cersei still sits on the throne. If you can't help me take it back, I'll find another hand who can," she went on. Yeah... I'd say that's reason to believe you're going to lose your job. Or your head.

Tyrion, f*cked, turned to Jorah and Viserys standing behind him and said, "I suspect one of you will be wearing this before it's all over." By "this," he meant his Hand of the Queen pin.

Dany was right. Trusting Cersei was a big mistake, one Tyrion couldn't help but make. It's fair of her to question Tyrion's judgment in this moment. Even Sansa found it shocking to see in last week's episode that Tyrion believed Cersei would follow through on her part of the deal. I mean... she's Cersei freaking Lannister. She was never going to march her army north.

Tyrion basically spent the rest of the episode chillin' in Winterfell and drinking. That's what he does, after all. He drinks, and he knows things. Trying to know some more things, he sat down with Bran Stark to learn about everything he's gone through since they last saw each other.

"If only we were trapped in a castle in the middle of winter with nowhere to go," Tyrion said back.

As for Dany, this episode was a little rough for her. Cersei's army didn't come, she's lost trust in her Hand, Sansa (after a conversation that actually brought them closer) doesn't want the North to be part of Khaleesi's kingdom if they live to see the end of the war with the Night King, and to top it all off, her boyfriend told her that he's actually her nephew. So... fun! Oh, and right after Jon revealed the truth about his parentage to her, the freaking army of White Walkers showed up. Great timing. At least, where Tyrion's concerned, Dany ousting him as her Hand might least of her worries now.