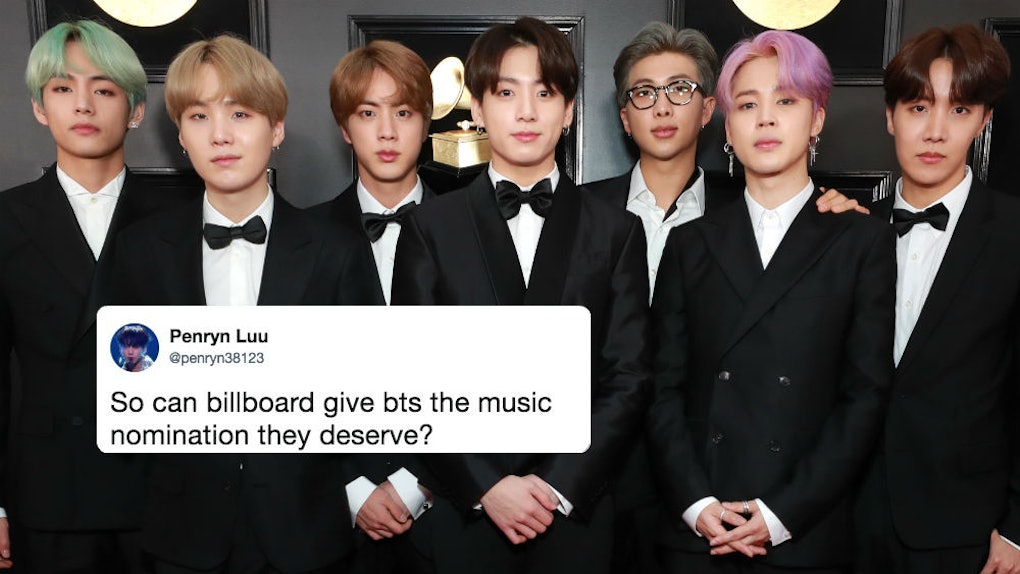 Will BTS' Music Be Nominated For A 2019 Billboard Music Award? Here Are The Chances

Well, there's almost no doubt they'll at least get one non-musical nomination. The boys have been No. 1 on Billboard's Social 50 for 83 consecutive weeks (the longest stretch for any artist in the chart's history) and they've held the number one spot for a total of 113 non-consecutive weeks. Those numbers will almost definitely nab them their third Best Social Artist nomination. And since the award is fan-voted, let's be real, BTS probably has the award in the bag.

But 2018 was a major year of history-making accomplishments for BTS, and for ARMY, an award for the boys' social clout rather than their musical accomplishments just won't cut it anymore. So, again, the real question is will BTS get a BBMA nomination for their actual music this year? It's an important distinction.

In 2017 and 2018, when BTS was nominated and won for Best Social Artist at the BBMAs, the boys' lack of nominations for their actual music was somewhat understandable. They were just as talented back then — and the ARMY just as passionate — but at the time, they'd yet to make their mark on the Billboard 200.

Let me tell you why the BTS ARMY are expecting more this year.

Beyond that accomplishment, BTS' Love Yourself world tour has also been making history in the U.S. The boys completely sold out the North American leg of the tour and their show at Citi Field Stadium in New York City marked the first time a Korean artist ever played a U.S. stadium. They managed to sell out that history-making tour stop in a matter of 20 minutes. According to StubHub, BTS was the No. 2 bestselling touring act from outside of the U.S. in 2018, coming in behind Ed Sheeran. Basically, the Love Yourself tour was no joke.

With accomplishments like that under their belt, it seems reasonable to venture that the boys could easily nab nominations for any combination of the following BBMA categories: Top Duo/Group, Top Billboard 200 Artist, Top Billboard 200 Album, Billboard Chart Achievement, Top Social Artist, and/or Top Touring Artist. It goes without saying that ARMY want the boys to get all the nominations simply because they love BTS, but it also can't be denied that the boys have the numbers and accomplishments to back up receiving some music-based nominations this year.

In 2018, Billboard nominations were announced just about a month before the show, which means we can probably expect our BTS BBMAs nom questions to be answered in early April. Let's hope 2019 is the year BTS sweeps at the Billboard Music Awards!