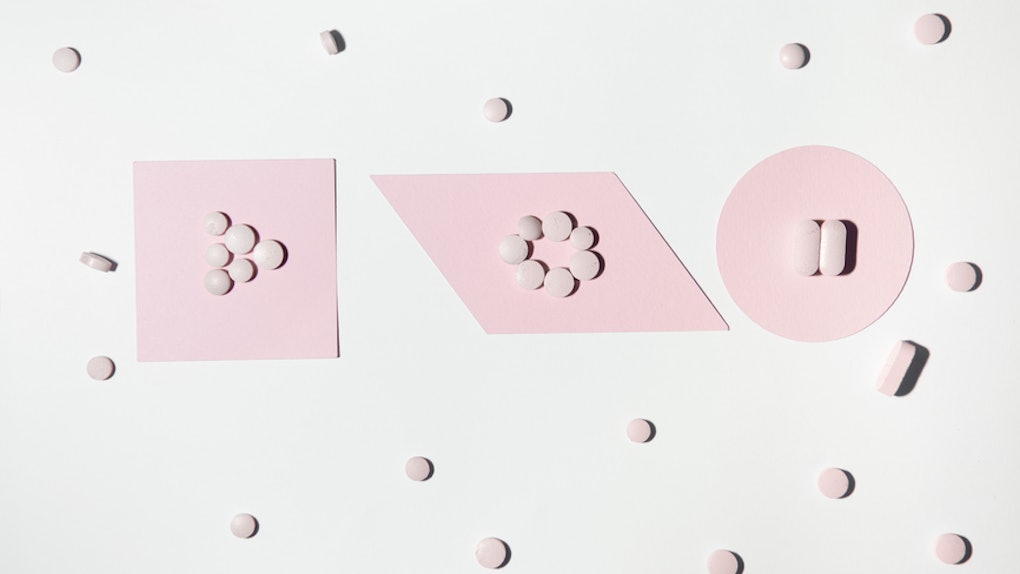 Will Birth Control Reduce My Sex Drive? Here's What Really Goes Down

Before we take a deeper look at whether or not oral contraceptives have the potential to lower your libido, let's take a moment to look at what is actually in birth control pills.

The two main hormones that are used as the active ingredient in just about every type of hormonal birth control are estrogen and progestin, both of which hormones are produced naturally in the female body. The amount of hormones depend on the specific birth control pill — most contain varying amounts of both hormones and some contain only progestin.

According to WebMD, hormonal contraceptives work by using synthetic forms of estrogen and progestin to raise your body's natural hormone levels, which accomplishes a couple of things. First off, it keeps you from ovulating. Additionally, it causes the mucus lining of the cervix to thicken, making it harder for the sperm to enter the cervix and find an egg. Lastly, if the first two methods don't work, the hormones cause the lining of the uterus to change, making it extremely difficult for a fertilized egg to be implanted.

Due to the fact that everyones body chemistry is a bit different, it's difficult to make blanket statements about the effects of a hormonal medication will have on someone who hasn't tried them. Although a drop in libido is not specifically noted as a side affect of birth control use, doctors say that patients report a lowered libido somewhere between 10 and 40 percent of the time — depending on who you ask. Needless to say, that is a pretty big margin and finding further statistics on the subject was surprisingly difficult.

"Despite the fact that an estimated 100 million women around the world use contraceptive pills, we know surprisingly little today about the pill's effect on women's health," said Angelica Linden Hirschberg, professor at the Department of Women's and Children's Health at Karolinska Institutet, in a statement.

While many medical professionals continue to insist that there is not scientific proof that birth control has negative effects on women's libido, this seems to be at odds with the anecdotal evidence of a pretty significant amount of users. It also should be acknowledged that many birth control pill users actually report an increase in their libido.

According to the health and wellness site verywell, while drops in libido may not be officially linked to any specific oral contraceptive, part of a woman's responsiveness to sexual stimulation is affected by androgenic hormones — hormones like testosterone that are oftentimes thought to be exclusively "male hormones." Some women's health experts believe that the increased level of female hormones due to oral contraceptives may reduce the amount of androgenic hormones in some woman, potentially causing their libido to take a nose dive.

It's also important to know that if you are experiencing side effects of oral contraceptives that your doctor (or any other medical professional) isn't taking seriously, then please find another doctor who will. There is no need to suffer through the side effects of any medication in silence. Sometimes it takes several different tries before finding the right pill or other birth control method that's right for you.