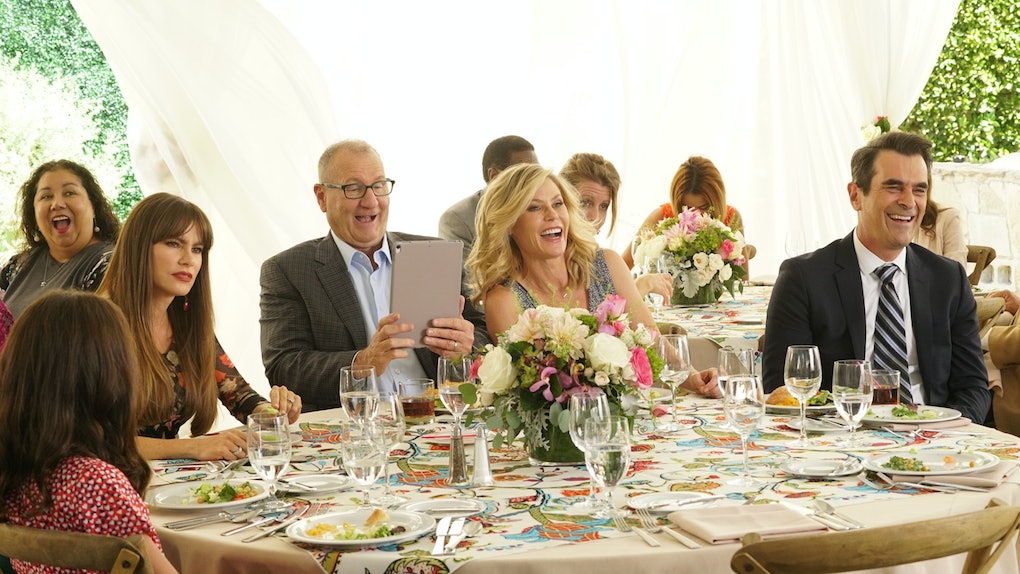 Will A 'Modern Family' Spinoff Happen? According To The Showrunners, It's Possible

Nowadays, it's easy to assume that a show nearing its series finale hasn't really seen the end. It may take a few years, but TV shows have a greater chance at revivals or spinoffs now more than ever before. After all, did you ever really think that you would see a middle-aged John Stamos still rocking leather jackets in Fuller House? Soon after the debut of the black-ish spinoff grown-ish on its sister network Freeform, ABC could possibly introduce a Modern Family spinoff to keep fans happy.

While nothing is official yet, showrunners Steve Levitan and Christopher Lloyd have thrown the idea out into the void as the show celebrates its 200th episode this week. Currently in its ninth season, the multi-generational Modern Family holds the honor of being ABC's longest-running comedy, and given today's TV landscape of shorter, streaming seasons, it could be one of the last network shows to run so long. Speaking to The Hollywood Reporter, Levitan remarked that its success is thanks to the show's universality:

The one thing that never fails to amaze me is that we're in 200 countries around. I've heard from people in the farthest stretches of the earth, and they say, 'Oh my god, I love that story when —,' and that was a story that's taken directly from my life or one of our writers' lives. It just goes to show you that families are families.

Season 10 will be the last for the show, and a confirmed end has stirred up talk of a spinoff, a word I definitely don't even remember being common vernacular when Modern Family premiered in 2009. Because of the show's large cast, there are so many directions a new series could go in. Lily takes on middle school! Manny and Luke backpack Europe! And those are just the youngest actors with full careers ahead of them — who knows how strong a spinoff starring one of the adults could be?

While Lloyd understands that fans would value a spinoff because of their interest in the characters, Levitan is a bit more skeptical:

Our plan is to end it at 10 [seasons]. If we can leave with most of our audience wanting more, I think that's the right way to do it. Never say never, but I just can't imagine that we'd go past that.

Never say never? Sure, that's what they all say.

Apparently, the network considered a spinoff in 2013, the show's prime era, but the possible storyline that went public wasn't very solid. Remember the real estate agent / the Dunphys' nemesis Gil Thorpe? He quite possibly could've been its star.

I barely remember Gil, so it's probably a good thing that a spinoff featuring him didn't take off. While a new series featuring Cam and Mitchell's eclectic friends could be entertaining, I think it's safe to say fans would most treasure a spinoff with true Dunphys or Tucker-Pritchetts at the center. Levitan and Lloyd admitted in their interview that they haven't had "substantive conversations" about a spinoff, but given the onslaught of shows recently returning after their series finales, I'm staying optimistic.

With a little more than a year to go until Modern Family's end, Levitan is also pursuing other projects. He is directing and producing the new Fox series LA to Vegas, marking his first work other than Modern Family in nearly a decade.

While the previews about the sitcom focused on an airplane crew made me recall one too many bad flights, it's clear that both Levitan and Lloyd are extremely proud of their Modern Family accomplishments. If the series should end completely in 2019, they can be assured that they've left one of the most iconic family comedies behind.