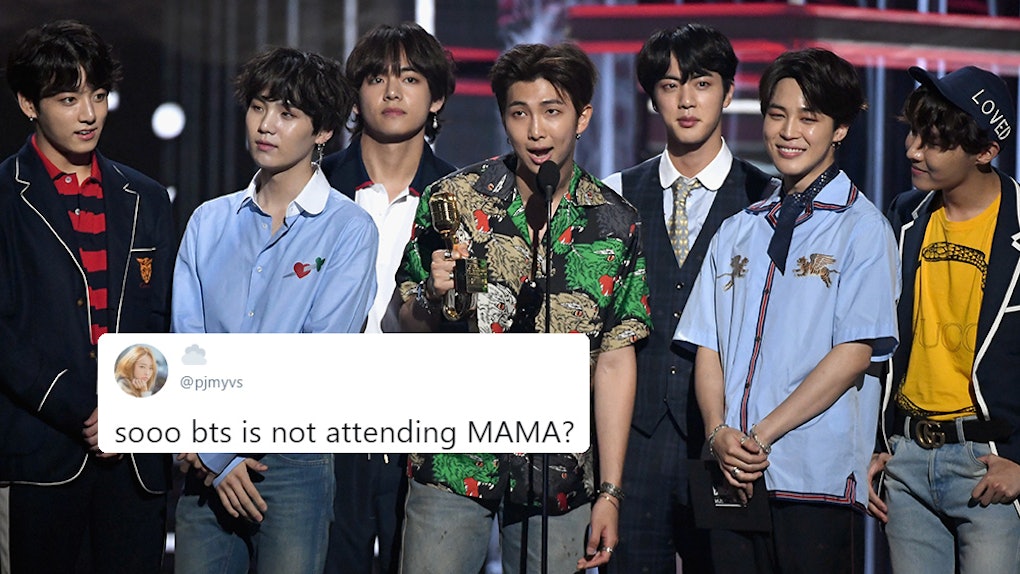 Why Wasn't BTS At The 2018 MAMAs Premiere? Don't Worry, They'll Make It Up To You

The 2018 Mnet Asian Music Awards premiere in Korea just wrapped up on Dec. 10 and the show was packed with your favorite K-pop acts, from Wanna One and THE BOYZ to Stray Kidz and LOONA. But if you're an ARMY (and, let's be real: Who isn't?), BTS' absence at one of Asia's biggest nights in music was impossible to ignore — especially since the show didn't end with an uproarious performance of "Idol" like most other Asian award shows have been as of late (the MBC Plus X Genie Music Awards, Asia Artist Awards, and Melon Music Awards come to mind). So, why wasn't BTS at the 2018 MAMAs premiere? Well, based on the night's lineup, it looks like the night was dedicated to showcasing K-pop rookies. And even if it wasn't, BTS' Love Yourself touring schedule — more specifically, the fact that they just got done performing for two sold-out crowds in Taoyuan, Taiwan on Dec. 8 and Dec. 9 — may have prevented them from attending the premiere anyway. But trust me when I say Jungkook, Jimin, V, RM, Suga, Jin, and J-Hope will more than make their absence up to you.

Unlike most award shows you're used to that take place on one night and one night only, the Mnet Asian Music Awards actually take place over the span of a week with three different ceremonies across Asia. The first was the premiere on Dec. 10 in South Korea, but there are two more ceremonies — the MAMAs Fans' Choice on Dec. 12 in Japan and the official 2018 MAMAs in Hong Kong on Dec. 14. While it's a bit of a bummer BTS wasn't at the premiere on Dec. 10, you can sleep easy tonight knowing they probably only missed out so that they can be well rested and ready to slay when they hit the stage at the other two MAMAs ceremonies throughout the week.

Yes, you read that right: BTS is slated to attend and perform at MAMAs Fans' Choice and the official MAMAs on Dec. 12 and Dec. 14. And based on the ever-increasing production value of their finale performances of "Idol" on this year's award-show circuit, you can definitely expect a mind-blowing performance from the boys on both nights.

I still have the boys' last "Idol" performance at the Melon Music Awards on loop. I really think the performance, which featured a remixed version of "Idol" that incorporated traditional Korean instruments and choreography that featured traditional Korean dances (OMG, Jimin's fan dance? I can not), will go down in BTS history as one of their best.

Actually, what time better than the present to relive that epic performance?

Damn. Watching that will absolutely never get old.

If this is what they pulled off at the Melon Music Awards, I can only imagine what the boys have in store for the MAMAs. They certainly never fail to top their best work, so the only thing you can expect is the unexpected!

Although the Asian award show circuit seems to be winding down after the MAMAs, there are still award shows all over the world that BTS will definitely score an invite to in 2019 (whether they can make it or not is the question, considering their busy schedule). After a history-making year on the Billboard charts in 2018, 2019 will most likely be the year the boys finally snag a musical nomination at the Billboard Music Awards (rather than the social-media focused awards they've been easily sweeping at American award shows the past couple years). And even though the boys weren't nominated for a musical Grammy this year like many fans had hoped, their album Love Yourself: Tear was nominated for Best Recording Package, with the nomination going to their art director, HuskyFox. Perhaps the Grammys will have the boys perform to, y'know, show off the talent that inspired that amazing Grammy-nominated album artwork? An ARMY can dream, right?

Anyway, even though BTS wasn't at the MAMAs premiere this year, it still definitely was not a night to be missed. Check out everything that went down over on Mnet K-Pop's YouTube channel!