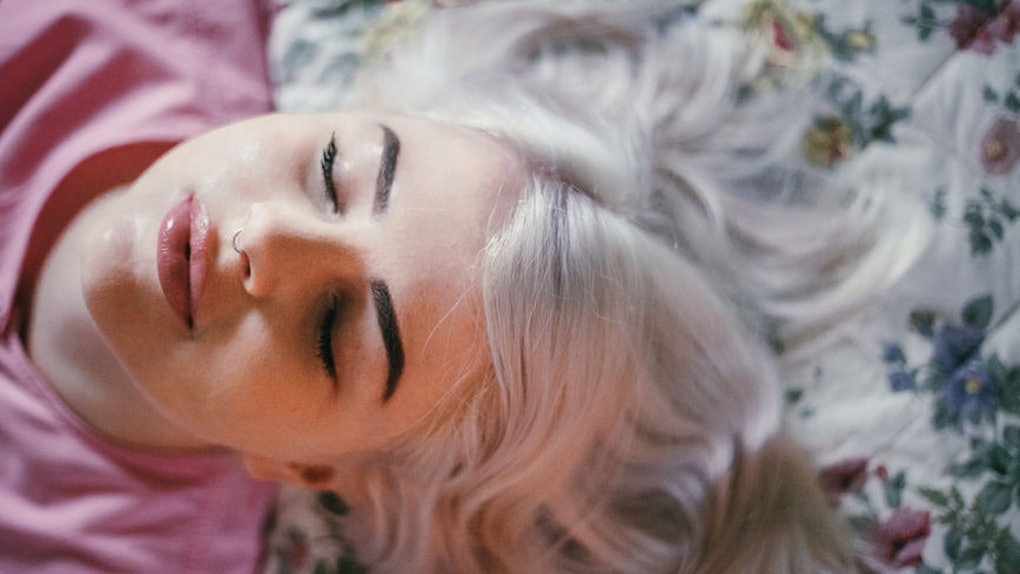 Why Meditating Before A Party Is Actually A Great Idea, Especially If You Get Anxious Easily

Picture this: You're at a party, and even though you know you should be having a good time, you're incredibly nervous and overwhelmed by the sea of people surrounding you, the dozens of different conversations buzzing in your ears. Your brain is spinning in an anxious whirlwind, so much so that you feel like you can't get out of your own head enough to actually enjoy the party. The truth is, many people can relate to this situation, even if they don't talk about it openly. And believe it or not, meditating before a party can be a huge game-changer for anyone who's dealt with this type of anxiety.

So you probably already know that meditation, in general, can help relieve stress, quiet your mind, improve your focus, and even boost your self-esteem, when done on a consistent basis. But even if you've dabbled in meditation before and reaped some of these wonderful benefits, I'm willing to bet you've never considered setting some time aside before a party, of all things, for your mindfulness practice. And honestly, I don't blame you.

Meditating before a party might sound totally bizarre and random — what do the two remotely have to do with each other? The answer is, a lot.

Feeling jittery and nervous when you're in a big crowd or social situation is pretty common: According to the Anxiety and Depression Association of America (ADAA), about 7 percent of the U.S. population has some form of social anxiety — but what's even more wild is, apparently, a lot of people experience symptoms of social anxiety for a long time before they actually seek help or figure out ways to manage their symptoms. Per the ADAA, a 2007 survey showed that 36 percent of people with social anxiety disorder reported experiencing symptoms of the condition for as long as a decade before reaching out for help. In other words, it seems like many people who struggle with various forms of social anxiety may not realize the options that are available to them to help them deal with their symptoms, and therefore don't always speak up about what they're going through.

According to Philippe Goldin, a lead researcher on the study, the two-month meditation practice was a huge help for people with social anxiety.

He explained in a Stanford News press release that it wasn't just that meditation helped with people's anxiety; it also helped improve the way the participants thought about themselves.

According to Stanford News, when asked to choose between those positive and negative adjectives to describe themselves, the participants were more likely to pick positive descriptors like "loved" and "admired" after the meditation training, and less likely to pick words like "coward" or "afraid." What's more, the researchers found, meditation also seemed to help relax the participants' brain activity during that word-choice test, which suggests that mindfulness may make it easier for people with social anxiety to "shift between ways of viewing themselves," the press release notes.

So what does any of this have to do with meditating before a party? Honestly, a lot: This research basically shows just how easy it can be to get stuck in negative thought patterns, especially when it comes to your self-image. But more importantly, the study demonstrates that mindfulness is an excellent, effective way to change those thought patterns, and therefore the way you act around other people. Meditation can teach you how not to get so caught up in what others are thinking in social situations, and instead, it can show you how simple it is to move freely from one thought to another, without assigning judgment or criticism or even real meaning to any of those thoughts. Once you realize your thoughts are literally just thoughts and nothing more, the anxiety those thoughts used to cause you tends to feel a little less heavy as a result.

Though it's important to set aside time for meditation each day to really immerse yourself in the practice, a few minutes of mindfulness before a party is never a bad idea.

In fact, Helen Sian India, a leading yoga teacher and wellness coach, says she always meditates before heading to a party or big event. "In order to make the best impression and completely enjoy the evening, a quick meditation is key," she tells Elite Daily, "and it’s best to meditate either before getting ready or right before you head in." According to the mindfulness expert, even just five minutes of meditation is more than enough — but you can definitely extend your practice if you feel like it or have the time to do so.

As for the most effective type of meditation to do before a party, India suggests trying a method called visualization: "Visualize the party going exactly as you’d like; see everything and everyone around you having fun; feel the excitement and the joy of meeting new people and having beautiful conversations, and that can be enough to create a fabulous evening," she tells Elite Daily, adding that it could also be helpful to go into the party with an intention that makes you feel good — whether it's making new connections, or even just enjoying the music: "Pick something you can’t fail at, so stay away from things like 'I need to make five new friends,' or 'I will find a partner tonight,'" she says. "Keep it open and breezy and you will always win."

And if you find that you're short on time before your event, the yoga teacher recommends repeating some basic, yet powerful, mantras to yourself to ease any anxiety you're feeling: "My favorites are ‘I am loved,’ ‘I am fabulous,' ‘I am confident,' and ‘I make conversation with ease’ — but of course, find one that suits you!" she says.

When it comes down to it, remember that you're definitely not alone in feeling this way. Everyone goes to parties and social events with the ultimate goal to have a great time and connect with others, and you're completely capable of letting go and doing just that, as well. With a little help from a quick, pre-party meditation session, you might just experience the best time out you've had in a while.