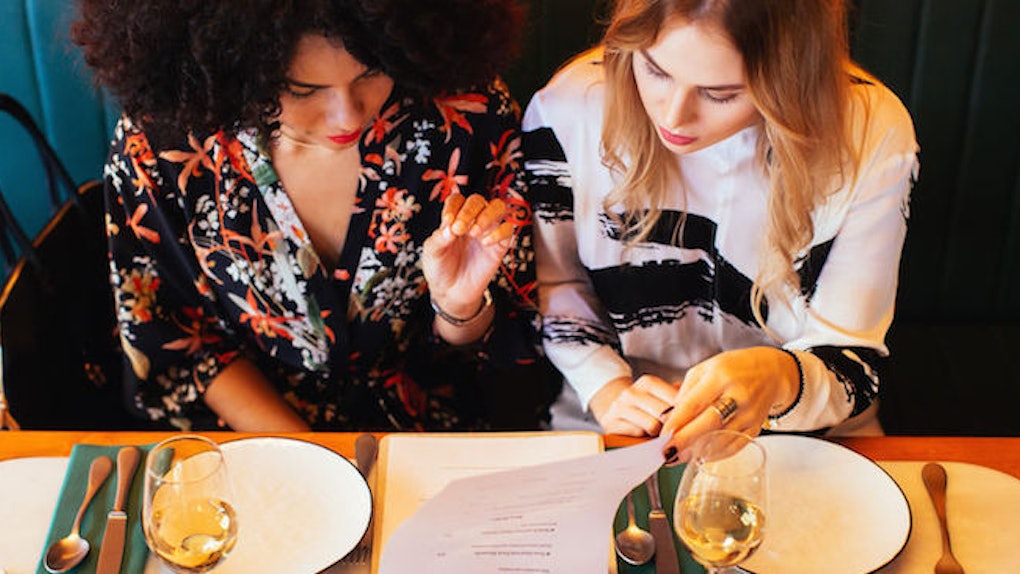 Why Is It So Hard To Figure Out What To Eat? This Study Might Explain Your Struggle

You're on your lunch break, standing in the Panera Bread line, staring at the menu, and quite honestly, you're overwhelmed. Should you eat soup for lunch? Or a sandwich? A combination of both? This is your weekly, if not daily struggle, and if you're anything like me, then you frequently become annoyed by your own indecisive tendencies. It should be easy to choose what you want for lunch — just make your selection and eat the damn thing, right? But a new study revealed the truth behind why it's so hard to figure out what to eat day in and day out, and I have some good news for you: it's really not your fault.

First of all, that pesky indecisiveness you feel on the reg about your lunch order has a name: It's called "choice overload," and according to a new study that's been published in the journal Nature Human Behaviour, it's basically when your brain is faced with an overwhelming amount of options and therefore struggles to make a decision. Talk about first-world problems, amirite?

According to ScienceDaily, the new study, which was carried out by researchers from the California Institute of Technology, explored the concept of choice overload to figure out what parts of the brain are responsible for the phenomenon, and how many different options the brain can handle when it's tasked with making a decision about something.

For the experiment, ScienceDaily reports, the researchers told their participants they could have various scenic landscapes printed on something, like a coffee mug or a t-shirt. They presented the volunteers with a variety of sets of photos; one set contained six photos, another had 12, and another set had 24 pictures. The participants were tasked with deciding which photo they wanted out of six, 12, or 24 pictures total, depending on which type of set they were randomly given. All the while, researchers measured their brain activity to see what exactly the volunteers' noggins were up to as they arrived at their decisions.

According to ScienceDaily, the researchers identified activity in two different parts of the brain while the participants made their decisions: the anterior cingulate cortex (ACC) and the striatum. Colin Camerer, an author of the study and Caltech's Robert Kirby Professor of Behavioral Economics, said in a statement that the ACC is "where the potential costs and benefits of decisions are weighed," and the striatum is "a part of the brain responsible for determining value," per ScienceDaily.

In addition to identifying activity in these two parts of the brain, Camerer and his team also found that this activity was highest when the participants had 12 photos to pick from. When they had six or 24 options, on the other hand, this brain activity was much lower, according to the research. Camerer explained that this likely means the brain was weighing the potential for a reward (aka a dope coffee mug or t-shirt) against the amount of work it had to do to narrow down a decision. "The idea is that the best out of 12 is probably rather good, while the jump to the best out of 24 is not a big improvement," Camerer said in a statement.

In other words, the amount of effort required to evaluate your options goes up as the number of choices increases, which is why you need a kind of sweet spot between mental effort and potential reward in order to make a confident, definitive decision about something. This isn't to say that 12 is some magic number that applies to every decision-making situation, but the general idea is that, as the number of options increases for a decision, the harder it will be for you to narrow things down and make a choice.

So, whether you're figuring out what to meal-prep for the week, or you're choosing from a huge menu while you're out to lunch, clearly, choice overload can sometimes make it seem impossible to decide what to eat. Not to worry, friends: Lisa Samuels, a registered dietitian and founder of The Happie House, has you covered with a few super simple, relatively healthy options that you can rotate throughout the week to avoid the risk of being slapped in the face by good ol' choice overload.

"For lunches with the highest boost of energy, it’s best to make sure you’re having a balanced meal, or one that includes a healthy mix of carbohydrate, fat, and protein," Samuels tells Elite Daily over email. "Whole grain carbohydrates not only provide slow and steady bursts of energy, but they also contain a large amount of fiber, which will help keep you fuller for longer and will improve your digestion so your body can make the most of your meals."

Add some healthy fats — think avocados, cheese, nuts, chia seeds, etc. — for flavor and texture, she suggests, and you're good to go.

The RD tells me she loves recommending a simple "bento box" type of lunch to her clients, as she says it allows you to enjoy a variety of flavors and satisfy hunger and cravings "You can include a fruit, small salad, a protein such as hardboiled eggs, tofu scramble, steak, chicken, or anything else you might have a hankering for," Samuels explains. To top it off, she recommends adding a small dose of carbohydrates, such as half of a large sweet potato (or a whole small one), some brown rice, quinoa, or a whole grain roll. "[This] will complete the meal and give you the midday boost you’ve been looking for," she tells Elite Daily.

If you're in more of a sandwich mood, Samuels tells me she's all about the turkey-avocado-BLT lifestyle, and TBH, I'm drooling. "This sandwich is quick, easy, and delicious," she says. "Top two slices of thick whole grain bread with turkey slices, [half] an avocado, turkey bacon or all-natural uncured bacon, tomatoes, lettuce, and a slice or two of your favorite cheese." You can press this sandwich on a waffle iron, Samuels explains, or you can grill it in a pan. Either way, she points out that this lunch is not only delicious, but really easy to prepare and eat on the fly — aka minimal effort on your part.

And for my fellow Chipotle lovers out there, Samuels says a homemade burrito bowl is another simple, tasty option for lunch. "This dish is very easy to make in bulk and will store in the refrigerator for three to five days," she tells Elite Daily. "It’s also a great option because you can use any and all leftovers you might have in the fridge, or you can customize it to your taste."

Here's how to make a quick burrito bowl at home, according to Samuels: Using brown rice or quinoa as the base, some optional mix-ins for your burrito bowl include avocado or guacamole, tomatoes, black beans, pinto beans, chickpeas, lettuce, and salsa. You can add steak, chicken, tofu, or another protein of your choice to complete the meal. That's it!

"Whether you’re a meat-eater, or a complete herbivore," Samuels says, "this recipe can work for you."

More like this
These Creative #EcoHacks On TikTok Encourage Green & Waste-Free Living
By Marisa Casciano
These Cold Brew Recipes On TikTok Will Take Coffee Lovers Out Of Their Normal Grind
By Marisa Casciano
40 Wine Puns For Captions, To Give Your IG Feed A Taste Of The Good Life
By Jasmine Vaughn-Hall
Stay up to date