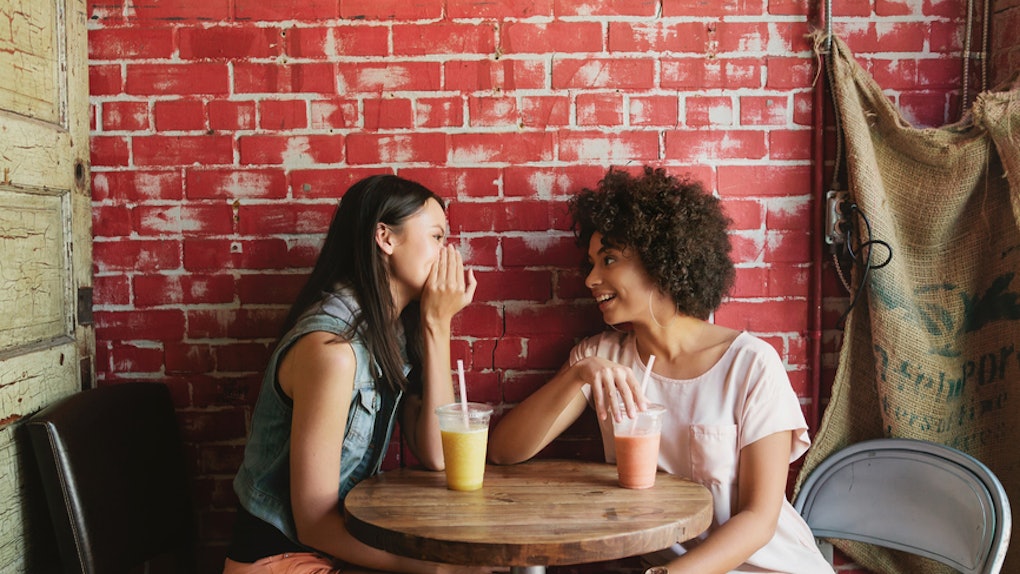 Why Does Gossiping Feel Good? Experts Say You Can't Really Help But Do It & Here's Why

Listen up, ladies, because I’m about to spill some major tea right now. Grab a snack, and get comfortable, because I’ve got the low-down on something so exclusive, even Wendy Williams hasn’t gotten a whiff of it yet: the truth about gossip. Love it or loathe it, most, if not all of you, have known one, been one, or have participated in gossip. This isn’t necessarily a compliment, but it’s certainly not a dig at your character, either. Think about it, friends: Why does gossiping feel so good, if it’s oh-so frowned upon?

On the off chance you're skimming through this with furrowed eyebrows and naivety written all over your face, allow me to quickly define what gossip is and what it entails. According to Carl J. Sheperis PhD, NCC, CCMHC, MAC, ACS, LPC, interim president and CEO of NBCC & Affiliates, gossip can be many things: true, false, exaggerated, and "the results are often hurtful." It's a way to pass on "evaluative information" about people, he explains, without those people being present in the conversation. In other words, if you talk about someone behind their back, you're gossiping.

But circulating information is a way of socializing, familiarizing, even educating; it’s what humans do to keep themselves entertained. While it’s true most idle chatter is negative (i.e. mulling over why Jenny and Rick from accounting broke up, venting about Katie’s poor work ethic to Lisa), Business Insider reports that experts aren't convinced gossiping is all bad. In fact, there may actually be some upsides to swapping stories and sharing tidbits of info with others on your lunch break.

Before you can fully understand why it feels good to gossip, you have to know why you do it in the first place.

Now, I grew up in a family comprised mostly of women, all of whom love a good gossip sesh. I like to think the pleasure I find in sharing personal stories (mine or others) is embedded in my DNA, but experts seem to be at a standstill over whether or not gossiping is just natural for humans.

According to Lata K. McGinn, PhD, professor of psychology and co-founder of Cognitive Behavioral Consultants, it’s probably safe to assume, at this point, that gossip is natural and instinctual for humans, because it’s so commonly practiced.

“All human societies — men, women, and children — begin sharing personal stories that happen to them and about people they meet in their daily lives from a young age,” Dr. McGinn tells Elite Daily.

Dr. Sheperis, on the other hand, says gossip is something you’re taught: “Gossip is a behavior developed through social learning theory and not something innate to human beings,” he argues. “We learn to gossip by watching others engage in the process.”

Even though the jury's out on the nature versus nurture debate here, there's one thing experts do know for certain: everyone gossips. Everyday Health reports the findings of a study conducted by the Social Issues Research Center in the UK, which found that men give in to gossip just as much as women do. In fact, a whopping 33 percent of male participants in the research admitted to gossiping on their cell phones daily, compared to 26 percent of women who said they call up their friends to report on the latest buzz.

But what is it about gossip that makes talking about other people feel so satisfying?

There’s good news, and there’s bad news. Let's start with the good news: The truth is, gossip isn’t all bad. In fact, your character might actually benefit from all that chatter, as long as you filter whatever it is you're spreading around.

Here’s how it works: According to Business Insider, when you talk about someone, something called “spontaneous trait transference” can take place, which basically means you, yourself, take on the character traits of the person you’re talking about. So let’s say you’re going on and on about how irritating your older sister is. Keep it up, and other people might start to find you irritating, too. Catch my drift?

Well, it turns out, this phenomenon works both ways. Spontaneous trait transference is also possible if you turn that frown upside down, and talk highly, rather than badly, about another person. So if you start chit-chatting about how lovely your new desk-mate is at work, for instance, you might start feeling pretty good about yourself, too. Now that's something worth spreading around, don't you think?

Another way gossip may serve you on a personal level, Dr. Sheperis tells Elite Daily, is that it can actually make you behave better. According to a 2012 study published in the Journal of Personality and Social Psychology, what's being said about you when you're not around can say a lot about your reputation.

"Because people have some level of fear about being the subject of gossip, they tend to act more appropriately in social settings," Dr. Sheperis explains.

On top of potentially improving who you are as a person, gossiping can also help fine-tune your social skills.

It sounds a little backward, right? How can talking about someone behind their back improve social interaction?

Well, you might not rack up brownie points from the person you're discussing, but according to Dr. McGinn, gossip actually brings people closer together because it's really just "a social instrument meant to facilitate social interactions." In other words, when you don't have anything to say in a conversation, it's not uncommon to talk about something somebody else said, just to get the ball rolling. Works every time, right?

Now for the bad news. Growing up, my mother always warned me that the people who gossip with you, are probably the people who gossip about you. Gossip is a risky game, so even though it might feel natural, and even kind of good sometimes, I would personally suggest taking the high road. Turn a negative into a positive whenever you can, and move on, my friend.