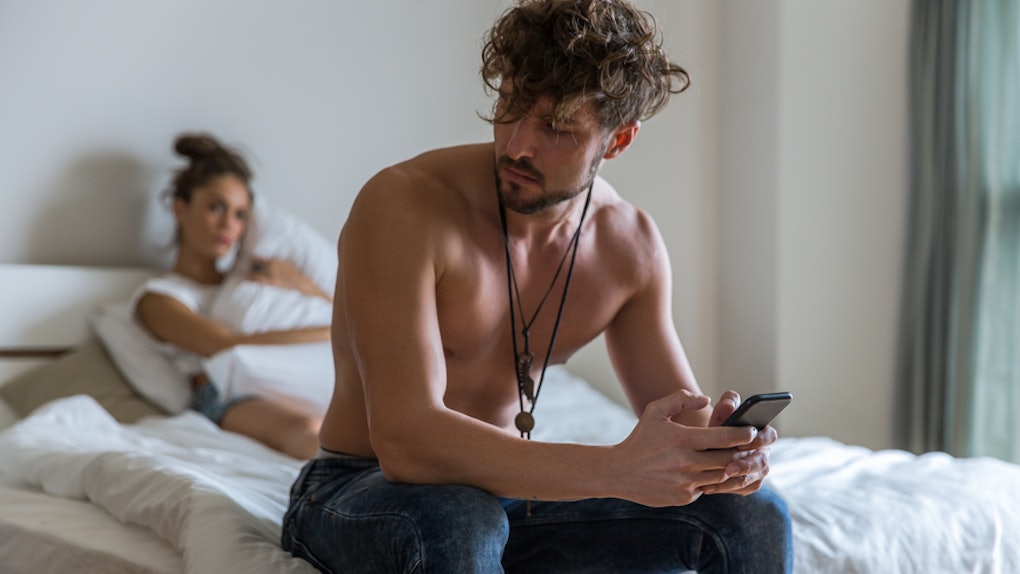 Why Do Guys Cheat? These Guys Explained The Real Reasons They Have Side Chicks

A partner's infidelity is devastating — and if you've never felt the urge to cheat, it can feel impossible to understand why someone would ever stray. Maybe you can even forgive one drunken mistake. But wrapping your head around an ongoing, long-term affair can be mind-boggling. There's not one simple reason why guys cheat; every situation is different.

If you're grappling with fears that your boyfriend might be seeing someone on the side, or you're newly single after dumping his cheating ass, you might want to understand how these five guys below rationalized their decisions.

I won't lie: These stories are brutal. They're not for the faint of heart. But since each guy wrote his story anonymously with throwaway accounts on Reddit, they all got pretty honest about what exactly ran through their mind as they cheated on their girlfriends, fiancées, and wives.

This guy had an affair with his girlfriend's sister Megan because Megan was staying at his house, wearing revealing clothing, and allegedly seducing him.

Megan is very beautiful, always does her hair and make-up, and spends a lot of her free time at the gym. So as you can imagine she has an incredible body. I've always found her attractive as far as eye-candy goes, but always off-limits...

Megan tends to wear revealing, sexy clothing. And now she's hanging around the house in yoga pants, low v necks (let's just say she was blessed up top- my GF has a D Cup and she's told me before that Megan's are bigger), spandex shorts, skirts. Thank god it's winter or she'd be strutting around in a bikini too. My GF has been wearing nothing but suit pants for the last 6 months...

Here's where I first slipped up. It was the first weekend and we had been hanging out and drinking. Megan was wearing this insanely sexy outfit... She was laying on the couch on her back, reading a magazine. At this point my GF was drunk and falling asleep (she wakes up for work at 7am so was tired). Megan stretches, arches her back in the air and my stupid, wandering eyes landed on Megan's breasts and down her shirt. Sure enough Megan looks up to see me staring at her chest. I tried to look away but I knew I was caught. She smiled at me and that was the end of it. We pretended like nothing happened. Or so I thought.

A few days later (I remember it was a Tuesday), I'm at home and Megan invites me to come and hang out and smoke a joint (she's staying in a small guest room we have in the backyard). I say sure why not and I head over. We're sitting on her bed smoking (again, a small guest room - no couches), and she suddenly gets up and takes off her shirt and pants. No warning. I'm a little stoned, mostly stunned so I don't say anything. She's wearing a black lace bra and panties, sprawled across the bed. She may be the most beautiful woman I've ever seen at this moment and I'm literally at a loss for words, so I quietly keep to myself as we finish the joint. Her eyes are closed and I'm admiring her perfect form.

This is the part that is a little fuzzy. Somehow, she got under the covers and asked me to cuddle with her. She gave me a long sob story about how she never sees her husband anymore and just wants physical comfort. This whole time I'm still hoping I'm reading too much into this. But we end up under the covers and she pretty much convinces me to take off my shirt and pants too. We cuddled, but I got aroused (obviously). She grabbed my d*ck and gave me a handjob in my boxers. As soon as I cummed I felt horrible. How could I do this to my GF with her sister? I told Megan that we should never do this again. It was a terrible idea and we betrayed her sister. We decided the best thing to do was to keep this to ourselves and never speak of it...

It's the third week... I'm working in my office when she comes knocks on my door. She's wearing work out gear- a small tight sports bra and short spandex... I remember she smelled so good too. It was all too much... She asks me to help her with something in her guest room.

I tell her I'll be there in a few minutes. I entered the bedroom and she pointed to some boxes in the closet. I start to pull out the boxes when I see her reflection in the mirror. She's getting undressed. I don't turn around for as long as I can (it feels like hours), but she just stands there waiting for me to turn around. It's unbearable, and I turn to admire her. She obviously wants me to look.

Long story short, we have sex right then and there. After that, all bets were off. This past week we had sex seven or eight times throughout the house (never when my GF was in the house though). Megan was subtly flirting/teasing with me constantly, even around my GF. I thought for sure my GF would notice.

This guy had an affair to feel better after his career took a turn for the worse.

Wife of 10 years, two kids no real issues between us ... and then I cheat on her. A briefish affair which my wife found out about. My wife asked me why I did it and for two years I've been unable to really understand that myself. Physical temptation ? Excitement ? Selfish psychotic tendencies ? This is not to excuse my behavior but I finally figured it out , it was a little of all of the above but primarily a means to escape the failure in my professional life. I'd fallen from a high end role (7 figures) to a comparatively basic position . Rather than confront my failure I chose a destructive path of a fantasy world with an attractive mistress. I hurt so many people and I truly have remorse for what I did, I also know what my trigger is and will not stray again.

This guy had sex with another woman a second time because he figured, well, he's already done it once... what's one more time?

This is going to sound like something from Jerry Springer but here goes. So me and my fiancé are high school sweethearts. We’ve been together since we were 17. It has been a rocky relationship. I cheated on her twice, once when I was 18 and once when I was 20. Both times I had sex with someone else. She found out about both times. We fought, and there were lots of tears, but she didn’t break up with me. I don’t know why. I admit I am a piece of sh*t who doesn’t deserve her. But she didn’t. And we’ve kept going. I proposed to her at Christmas 2013. The wedding is planned for July 2015. Everything was going well. I would say we’ve never been closer. The sex is the best it’s ever been and my heart still skips a beat when I think about her. But she left to visit family on Friday and I f*cked up in a major way.

I went to a bar with a friend on Tuesday. I got drunk. I saw this girl who I went to high school with, we’ll call her B (she knows my fiancé, but not very well, and knows that I am engaged. Her and my fiancé are not friends but they don’t dislike each other as far as I know). My buddy left. I stayed drinking with her. One drink lead to another and next thing I know she starts kissing me. I know it doesn’t matter a thing but she was the one who initiated. I am pretty drunk so I find myself kissing her back. We get a cab back to mine.

This guy strayed because he thinks "men are not inherently monogamous."

Been casually dating this girl. She takes it more seriously than I do. I met another girl and hooked up. I told her. Now she is mad and asking me why. I have tried to explain that men are not inherently monogamous. She still asks why.

This stay-at-home dad is having an affair with one of the moms in his Mommy & Me group because he feels emasculated by his wife.

10 months ago I made the worst decision of my life: I decided to be a stay-at-home dad. Don't get me wrong I love my daughter and I love being with her, but it has completely ruined my relationship with my wife. I can't fully explain my wifes shift in demeanour towards me but it's like she has lost all respect for me as a man. We've only had sex one time since our daughter was born because she always says that she's not in the mood. We've been together for the better part of a decade and she's never acted this way towards me. Even while she was pregnant she didn't treat me this way. I've tried to talk to her about it but she just says that she can't change how she feels. For these reasons I've been feeling pretty emasculated. So as the title says, I've been having an affair. The woman I'm having an affair with is one of the moms in my "mommy and me" group. I've known her for 6-7 months now but we've only been doing this for about a month.

I honestly don't know what the f*ck I'm doing and I don't know where I'm going to go from here... All I know is that she makes me feel respected and makes me feel good in a way that my wife doesn't anymore. I want the relationship between my wife and I to return to what it was previously, but even if I went back to work and she started treating me with respect again, I don't know if we could ever go back.

If you're reading this because you've recently been cheated on, here's my advice: It's time to binge-watch The Good Wife, in which Mr. Big (excuse me, Chris Noth) cheats on his lawyer-turned-stay-at-home-mom wife Alicia Florrick; that incident becomes the catalyst that rockets her to a high-powered career, political power, and a verrrry sexy relationship (or two) of her own. You got this, girl.