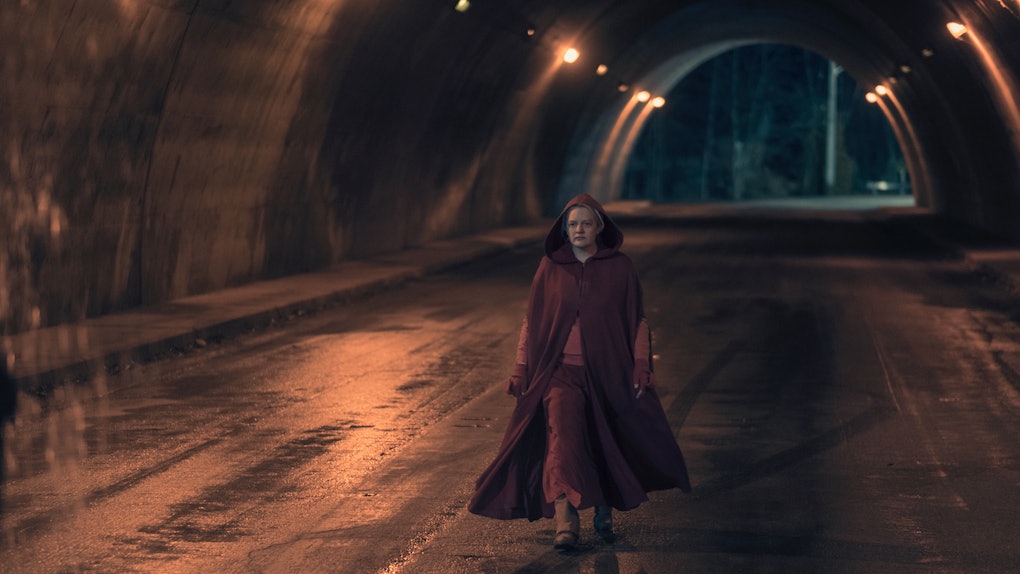 The Handmaid's Tale Season 2 began with June in the back of a van, with the thought in her head it might be Mayday come to rescue her and take her to Canada. By the end of the first episode, Mayday had arrived, and June spent three long hours following their underground railroad in a desperate act to get herself out of Gilead once and for all. She failed. For a while, it seemed like she had accepted her lot in life, but then the opportunity came again. So, why didn't June leave Gilead? Warning: Spoilers for The Handmaid's Tale's Season 2 finale follow.

When the house across the street from the Waterfords catches on fire, the street is thrown into chaos. Before Offred, who is holding her baby, can even consider the implications of what is happening, Rita bursts in: "We can get you out, but you have to go right now." It's almost like a retread of the end of Season 1. Offred didn't know who she could trust back then. This is different. Over the course of this season, Offred and Rita have come to an understanding. Heck, Rita even calls her Nick's girlfriend. If Rita says escape is here, right now, Offred is getting her shoes.

But here's the crazy part: the entire household gets in on it. It's not just Rita sneaking Offred and Holly out the back door into the car. It's Nick running upstairs to keep Commander Waterford from following her, claiming the streets are "too dangerous." And the biggest shock of all, it's Serena Joy giving Offred her blessing to take the baby, who she calls Nicole, and to get her out.

Serena Joy tried. She was part of the cadre that made Gilead possible. But much like Commander Lawrence, what sprang up out of her efforts was a monster with ramifications she never considered. It's a horror trapping her, too, cutting her finger off for daring to suggest her child should be allowed to learn to read. Her baby is not safe in Gilead.

Once again, Offred is driven off and left, now holding a tiny life in her arms, in the middle of nowhere on the side of a road. But this time, a real ride comes to take her straight to Canada. It's the van Commander Lawrence ordered to get Emily out, and June is being offered the other seat to freedom.

She doesn't take it.

It's the show's most stunning moment yet. Here it is, the ride to Canada, the way out. The door is open, all she has to do is step on through. Instead, she hands to baby to Emily and goes home.

All fans want to know is: Why?

Now, to be fair, ending Season 2 in a van riding to potential freedom is exactly the way Season 1 ended. To do it twice is repetitive. Also, the show is greenlit for Season 3 and it's still June's story. (She is the handmaid of the tale.) It doesn't end until she's out, and once she's out, there's not much left to tell.

All these people she cares about just took a huge risk to get her out. If she doesn't come back, chances are they'll all be executed by a hysterical Waterford, who will demand the Canadian government return his child. In a sense, Offred has to return to protect them.

She's taking a huge risk by returning. Serena Joy could not protect her. She could flip out when she finds out June gave her kid to a woman who literally stabbed Aunt Lydia and threw her down the stairs. But June is betting the offer of giving Waterford another try for a boy this time will be too tempting. She thinks by offering herself to behave, she can bring things back to the status quo and begin the revolution from the inside.