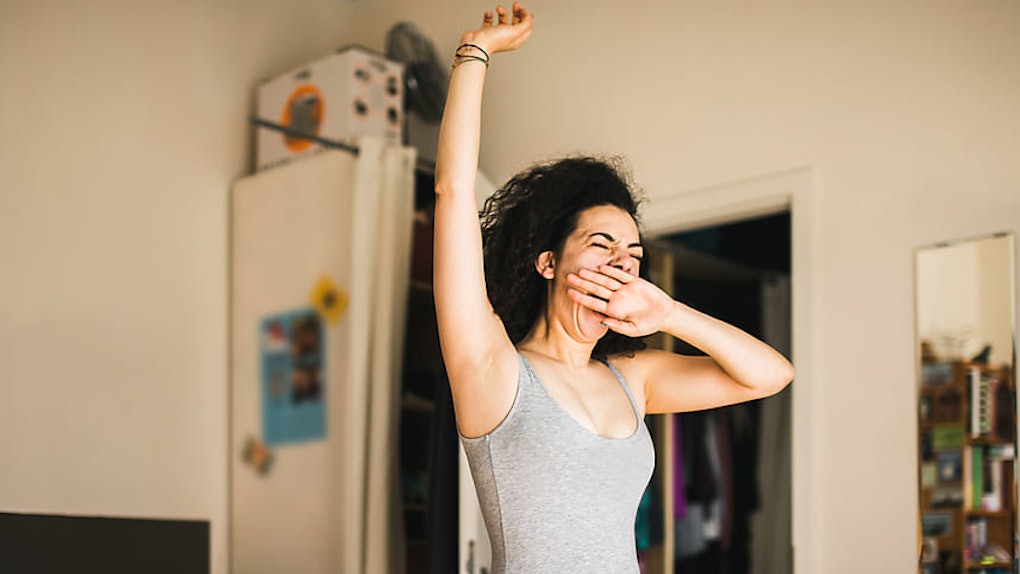 Why Are Yawns Contagious? Even Science Is Pretty Stumped By This Phenomenon

Call me oblivious, but I never realized yawns are contagious until my best friend clued me in toward the end of high school. I was in the middle of trying my absolute hardest to keep my mouth shut in the middle of class, but the yawn came, went, and not even five seconds later, she was covering her mouth. Not knowing any better, I nudged her arm thinking she was just making fun, but she glared back at me. From what I can tell, the reason why yawns are contagious remains a mystery to science, but you and I both know it’s definitely a thing. Unlike the common cold or the flu, however, catching someone else’s yawn isn’t harmful to your health; it’s just one of life’s funny coincidences you learn to roll with.

I know myself, and yawning has always just been something my body does from time to time, and I've never really thought twice about it. But I guess before you can even start brainstorming why you can “catch” someone’s yawn as easily as you can the common cold, you have to know what a yawn even is, and what it means for your body. According to Dr. Sujay Kansagra, Mattress Firm’s sleep health expert, a yawn is simple in that it’s basically a reflex that triggers the inhaling and exhaling of breath.

Why humans yawn is still a mystery, but one thing experts know for sure is this: Yawning sends a message to the brain that something in the body needs to change.

In an exclusive interview with Elite Daily, Dr. Kansagra explains that, in terms of why humans yawn, there’s still a ton of research to be done, because while there are popular theories out there, nothing is concrete. What scientists do know, he says, is that yawning causes the brain to “make a change in its state, either from bored to alert, sleepy to awake, etc.” In other words, experts know how yawning affects the human body, but they’re still trying to figure out why you and I are subject to yawn in the first place.

Personally, I always thought yawning when I was really tired was a sign my body was ready for bed, or if I caught myself stretching with my mouth hanging wide open in the middle of a lecture, it just meant I was bored out of my mind. Sleepiness and boredom, according to Dr. Kansagra, are popular theories, but some experts think yawning has less to do with emotion, and more to do with your physiological state.

“Another theory,” he tells Elite Daily, “is that when we are relaxed, we are not breathing as deeply, and a yawn allows us to expand our lungs and keep them functioning at their optimum.” If this is true, then a yawn serves as a kind of natural correction, much like the most recent theory Dr. Kansagra points out, which suggests yawning “may help cool the brain in situations when it gets too hot.”

Yawning isn't always contagious, though; the question of when you'll "catch" a yawn will depend on a few things.

Have you ever held a sleepy baby, and in the middle of rocking the little munchkin to sleep, he or she yawned, so you followed suit? Well, it turns out, babies and children under 5 years old are actually immune to the domino effect that is yawning. Dr. Kansagra tells Elite Daily that while it’s true yawning is definitely contagious, a child’s brain isn’t developed enough to mimic your yawn until they're about 5 years old, which is “around the time they develop better social understanding and empathy," he explains.

So, again, just when you thought you were beginning to understand how yawning works, you're back to exploring why humans yawn, and why yawns are contagious. It almost seems like the more experts dig, the deeper this confusing, dark hole gets. Because if yawning has everything to do with what’s going on physically inside your body and with your brain, where do social understanding and empathy come in?

According to certified sleep science coach and founder of SleepZoo, Chris Brantner, socialization might have everything to do with why, when your best friend yawns, you’re right there with her — at least, that's one theory scientists are exploring. "The idea goes that yawning is contagious, which shows empathy," Brantner tells Elite Daily, and it doesn't necessarily mean you only yawn when another human yawns.

As far as Brantner's concerned, you can literally "catch" a yawn from watching TV, or even from looking at pictures. Hell, I was yawning scrolling through GIFS about yawning. And yes, because I had an inkling you'd be wondering about this, too, Brantner tells Elite Daily pets can also catch yawns — yes, really! What's even more interesting about that fun fact, though, is that, according to a 2013 study published in PLOS One, dogs tend to respond to their owner's yawns more than they do the yawns of strangers. Is this a coincidence? Some experts think not.

"We are more likely to mimic the yawns of others when we know them well, a result that has been shown even in chimpanzees," Kansagra tells Elite Daily. According to his research, scientists have tried to identify where yawns stem from by paying close attention to which specific areas of the brain "light up when we see others yawn." For instance, something called the mirror neuro system, which Kansagra says is an area that's important for understanding other people's actions and imitating them, is a big one to watch for here. However, he telsl Elite Daily, other areas of the brain related to social behavior and empathy also play a role, though the specifics still haven't really been nailed down.

As of now, it's still unclear why you yawn; it could be solely physical, or it could be emotional. What I can tell you is I've yawned more in the past hour or so writing this article than I ever have in my life, so if you need any proof yawning is contagious, now you have it.