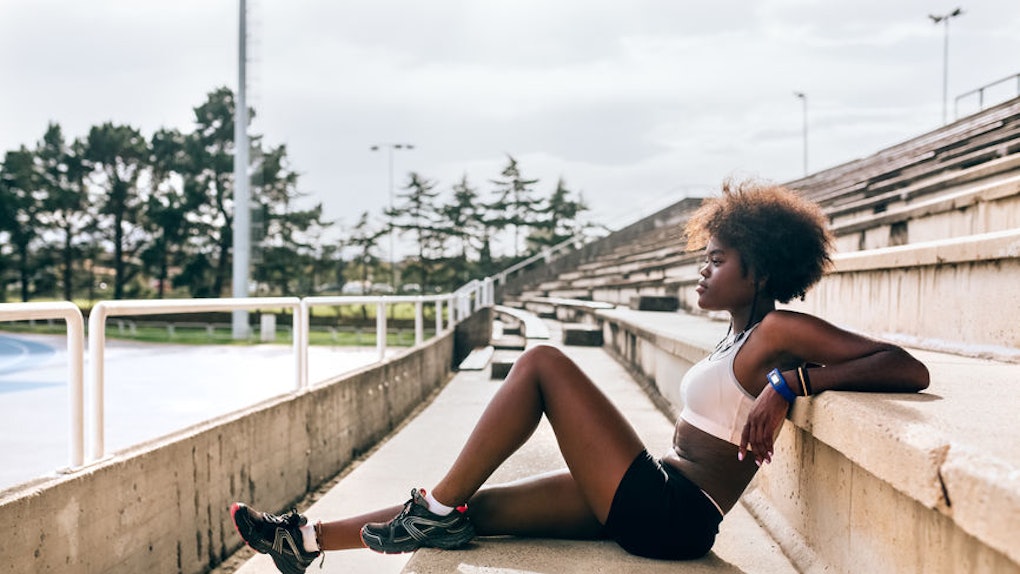 Why Am I Never Hungry After Working Out? It's Actually Pretty Normal, So Here's What's Going On

Figuring out what to eat after a workout can sometimes be more daunting than you'd ever expect. You're not necessarily hungry right away most of the time, but some days, your appetite slaps you across the face within an hour of leaving your SoulCycle class. And other times, you go through phases where you're never hungry after a workout, which is basically an even bigger head-scratcher. I mean, you just used a ton of energy and put your heart rate and muscles to work — where the hell did your appetite go, and when does it plan on returning?

First of all, even though it seems like a given that you should feel hungry soon after working up a sweat during a HIIT circuit or a yoga class, research shows it's actually not that weird to lose your appetite right after a workout: According to a 2016 study published in the journal Medicine and Science In Sports and Exercise, exercise really can make you feel less hungry.

In the study, the researchers measured participants' food intake in calories, and in the beginning of their experiment, they figured out their participants' total calorie consumption, then split everyone into two groups: One group was temporarily put on a diet to create an "energy deficit" by cutting their overall food intake, while the other group was told to create the same type of energy deficit, but through a 90-minute run on a treadmill instead of a difference in diet. Then came what had to be one of the most glorious turn of events in the history of scientific research: The two groups were presented with an all-you-can-eat buffet, and the researchers measured how much everybody ate after their cutting their "energy deficits."

The study found that the group who ran on the treadmill ate fewer calories at the buffet (about a difference of 300 calories in total) than those who cut their food intake without exercise. So basically, exercise, despite expending your body's energy reserves, actually tends to make you feel less hungry, even in the face of an all-you-can-eat buffet (ribs and tiny corn, anyone?).

Now how could this be, you ask? Well, the researchers discovered it seems to come down to two hormones in your body: When you exercise, a hormone called ghrelin, which is responsible for making you feel hungry, decreases, and at the same time, your body's levels of a hormone called peptide YY increase, and that actually suppresses your appetite to some extent. And apparently, the research found that these hormonal changes only happen when you exercise; in fact, the study demonstrated that when you cut calories by limiting your food intake instead of exercising more, that hunger hormone increases, and the hunger-suppressing hormone decreases. Pretty interesting, right?

In addition to the change in hormones, Alisha Temples, a licensed nutritionist at Fueled & Fed Nutrition, points out that exercise puts stress on your body —and when it's intense enough, it can make you lose your appetite for a bit.

"You may not feel hungry immediately after a workout since exercise is a stressor on the body," Temples tells Elite Daily over email, adding that, physiologically speaking, your body's blood flow, when under stress, diverts away from the digestive system and goes elsewhere, causing you to feel less hungry as a result. "The longer or more intense a workout, the less likely you will be hungry afterward," she says.

As for how long you should wait to eat after a workout, Temples says it all depends on the duration and intensity of your workout. Of course, you have to eat at some point, and the nutritionist generally recommends eating within about one to three hours of moderate exercise. For more intense workouts, particularly ones that are longer than an hour, she suggests eating a small meal within 30 minutes of exercising, and a more regular, balanced meal within about two to three hours of the workout.

And if you're wondering what to put on your post-workout plate, Temples suggests eating something that's high in both carbs and protein, especially if you just did something super intense like a HIIT workout. Specifically, to hit that carb-protein sweet spot, the nutritionist recommends salted potatoes and turkey breast as a post-workout meal, a banana and peanut butter, or even eggs on toast. After a strength-based workout, she says, many people find they want a little more protein to nosh on, like a protein shake with a banana, cottage cheese and pineapple, or tuna on crackers.

But if you aren't running to the bodega the minute after finishing your workout, don't freak out. Your appetite will come back, and oh my lord will that Seamless takeout be delicious.

More like this
25 Instagram Captions For Workout Pics & Being A #Boss In The Studio
By Marisa Casciano
These Creative #EcoHacks On TikTok Encourage Green & Waste-Free Living
By Marisa Casciano
40 Wine Puns For Captions, To Give Your IG Feed A Taste Of The Good Life
By Jasmine Vaughn-Hall
Stay up to date