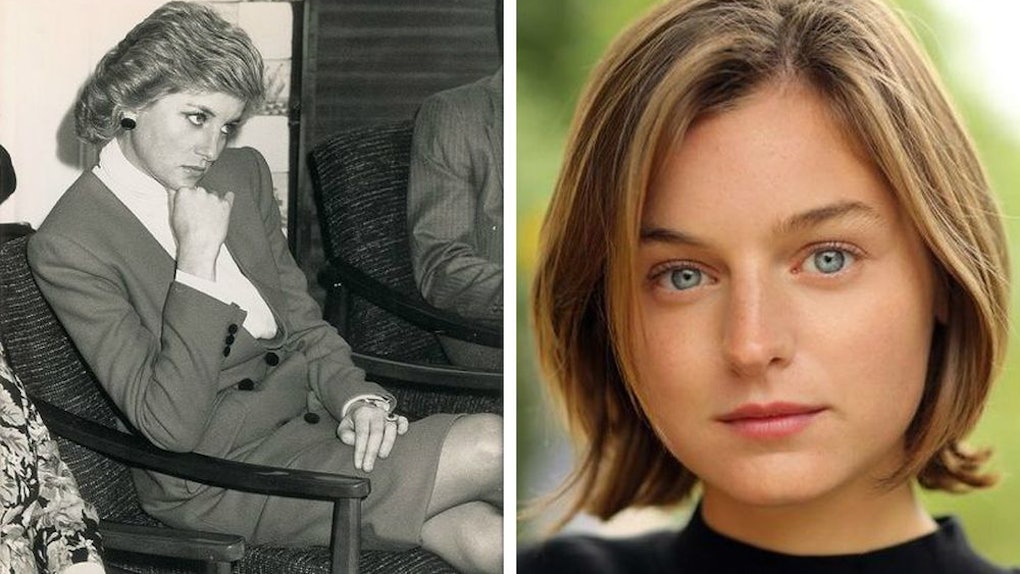 Who's Playing Princess Diana In 'The Crown' Season 4? Emma Corrin Is Taking On The Role

The most famous royal love triangle of the latter half of the 20th century is now complete. Netflix announced this week the casting for Princess Diana in The Crown has landed on the perfect actress for the role. There's just one small catch. With two seasons of the series under their belt already, The Crown Season 3 is due out sometimes in 2019. With this casting, the streaming service confirmed she will not be appearing in it, making her debut in Season 4 instead. Who's playing Princess Diana in The Crown Season 4? It's a newcomer by the name of Emma Corrin.

For those who have been paying strict attention to the way The Crown has divvied up the decades in the first two seasons, this shouldn't come as a surprise. Season 1 covered from 1946 to 1954. Season 2 picked up with 1955, ending in 1964. Season 3, it logically follows, will begin with 1965 and end in 1974, or thereabouts.

Born in 1961, Diana didn't meet Charles until 1977, when she was 16. If The Crown continues to follow the trend already set, and sticks to focusing on the immediate royal orbit around Elizabeth, Diana may not show up until a few episodes into Season 4.

The good news is, this gives the show time to establish what happened pre-Diana in the coming season. Charles and his now wife, Camilla, who was so famously the "other woman" of the Charles and Diana marriage, was part of his life for years before he was married to Diana. The two of them were rumored to be in a relationship that was sunk by the Palace for not meeting its strictest royal standards.

In Season 3, the adult Charles (Josh O’Connor) will be invested as Prince of Wales, and start his relationship with Camilla Shand (Emerald Fennell). How their relationship failed, and her marriage to Andrew Parker-Bowles will be a part of this coming year.

Corrin is a relative newcomer to television, with only a few guest appearance to her name, including PBS favorite Grantchester. Considering how young Diana was when she was first swept into the royal orbit, it's not surprising the show went with a new face. According to The Hollywood Reporter, The Crown creator Peter Morgan said of her:

Emma is a brilliant talent who immediately captivated us when she came in for the part of Diana Spencer. As well as having the innocence and beauty of a young Diana, she also has, in abundance, the range and complexity to portray an extraordinary woman who went from anonymous teenager to becoming the most iconic woman of her generation.

The tweet announcing Corrin's casting also noted that the series would start filming Season 4 in the fall, confirming rumors the show is doing back-to-back filming with the current cast. Considering the slow process it was to recast the entire series as the generations aged up between Seasons 2 and 3, this gives the show maximum time to do the final recast between Seasons 4 and 5 next year. The Crown is currently slated to run six seasons.

The Crown Season 3 does not yet have a release date.