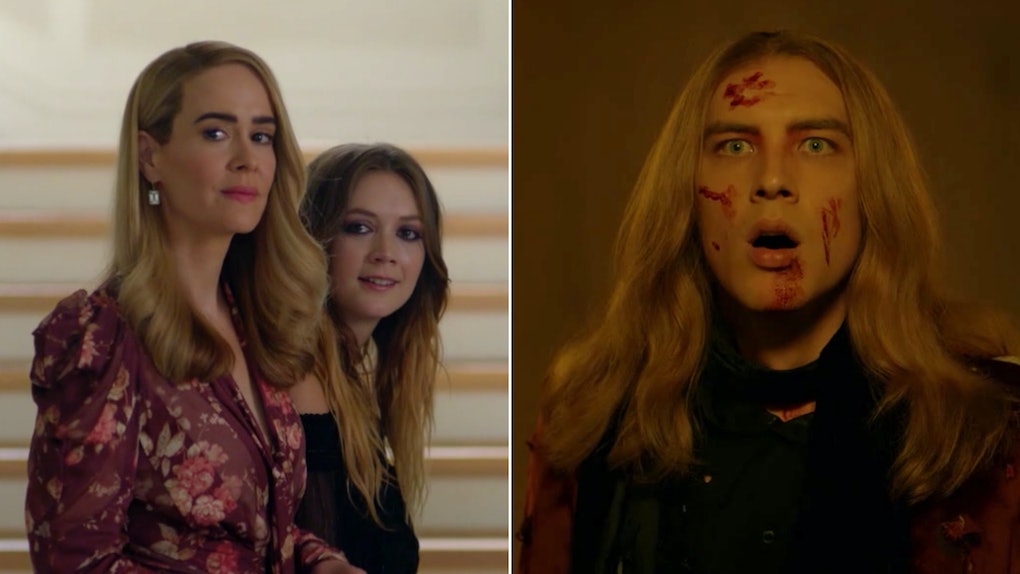 Who's Dead & Who's Alive After The 'AHS: Apocalypse' Finale? Fans Are So Confused

The end finally came, and it was... kind of confusing? American Horror Story: Apocalypse closed out its sprawling crossover season with a blood-filled final battle some time travel trickery, but with all of those twists and turns packed into just one hourlong episode, a lot of fans might have been pretty confused about what just happened when the credits rolled. Like, who's dead and who's alive after the AHS: Apocalypse finale? There has been so much killing, resurrecting, and timeline-shifting this season that it can be hard to be sure. Let's go over where everyone left off at the end of this season.

Spoiler alert: Don't read on if you have not watched the season finale of AHS: Apocalypse yet. After waiting the entire season, we finally got to see Michael Langdon and the witches battle it out in a full-on magical fight. Although Michael killed pretty much all of the witches (Madison, Coco, and the just-resurrected Marie Laveau), it did not really matter because Cordelia managed to transfer the powers of the Supreme to Mallory by killing herself, allowing Mallory to use her time-traveling magic. Mallory transported herself back to 2015, exactly when Constance Langdon kicked the still relatively weak Michael out of her home. Right as the young Michael walked outside, Mallory ran over his body multiple times with a car, killing him. After all this time, all it took to take down the antichrist was a Subaru.

With Michael dead, Mallory managed to completely alter the timeline of the season, and that is where everything can get confusing. Still in 2015, Mallory enrolls in Miss Robichaux's Academy, not revealing that she already knows Cordelia and the rest of the witches. Because Michael never became the antichrist, Zoe and Queenie are still alive, but sadly Myrtle and Madison were never resurrected. In one happy twist, Misty is actually returned to life as a reward for Mallory stopping the antichrist.

Another very important, world-altering moment from this scene is when Mallory convinced Queenie not to stay at the Hotel Cortez on her trip to Los Angeles. As fans know, Queenie is killed in that hotel during the events of AHS: Hotel, and her blood is used to revitalize the vampiric Ramona Royale, who goes on to play a pivotal role in killing the Countess directly afterwards. Now that Queenie never went to the Hotel Cortez, fans are left wondering if Ramona was ever able to recover from her ailment. Mallory's one action could change the entirety of AHS: Hotel, leaving Ramona to die and possibly allowing the Countess to live.

And Hotel is not the only season that Mallory's time travel has affected. Earlier in Apocalypse, Madison and Behold visited the Murder House and were actually able to help a number of the Murder House ghosts move on. They removed Moira O'Hara's bones from the property so that the long-suffering maid could finally be with her mother, and they helped Violet and Tate rekindle their love after years of Violet being unable to forgive Tate. But since that Murder House visit never happened now, Moira is sadly still trapped in the house and Violet and Tate are doomed to be apart.

The most annoying part of all is that Mallory's time travel was all for nothing, because even though she killed Michael, we see Timothy and Emily still gave birth to another antichrist a few years later. Jeez, what's a witch gotta do to save the world around here!?