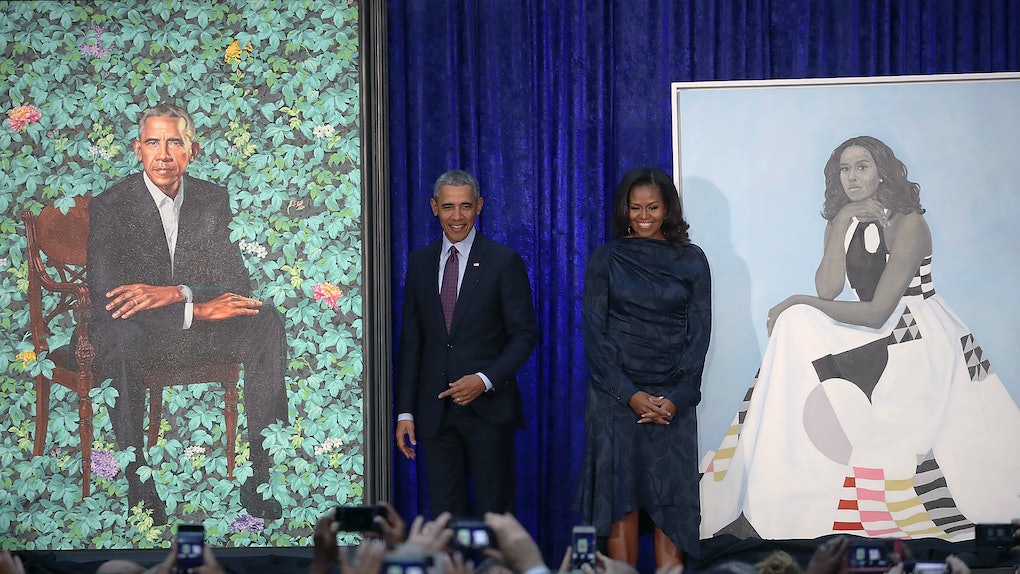 Who Painted Barack & Michelle Obama's Portraits? Kehinde Wiley & Amy Sherald Share How They Got Close To The Pair

On Monday, Feb. 12, at the Smithsonian's National Portrait Gallery in Washington D.C., Barack and Michelle Obama's portraits were unveiled. The former president and first lady were on hand to literally pull the curtains off their portraits, which were painted by Kehinde Wiley and Amy Sherald, respectively. The Obamas themselves actually picked out these artists, who tell Elite Daily that throughout the process, the family's appreciation for art history shined through.

"When [the Obamas] were here in Washington, they came regularly, actually, after hours, to the portrait gallery,"' National Portrait Gallery Director Kim Sajet says in an interview with multiple outlets at the museum after the unveiling ceremony. "We have some really wonderful pictures of them with their daughters taking tours through 'America’s Presidents' [a museum exhibit]."

Barack and Michelle were pretty intimately involved in picking out the artists who would paint their portraits. The National Portrait Gallery provided a selection of artists for them to choose from, which included a mixture of men and women, black and non-black painters, and painters from Chicago, according to Sajet. From there, the Obamas — along with some artistic advisers — picked out a handful from that group to interview for the high-pressure job.

In her speech during the unveiling ceremony, Michelle Obama actually apologized for putting the artists through that interview process. "It wasn’t lost on us how unnerving this experience was for each and every one of them," she said. But it was because of that process that the Obamas were able to find Wiley and Sherald. They then each had two sittings with the artists, according to Sajet.

"My nerves were on top of me," Wiley, who painted Barack's portrait, tells reporters after the unveiling. "What I came out of the process with was an incredible respect for [Barack Obama's] appreciation for art history, his ability to see exactly what I was going for in the selection of the models."

Wiley is known for his ecstatic portraits of essentially random people he sees on the street and asks to paint. "What I was always struck by whenever I saw [Wiley's] portraits was the degree to which they challenged our conventional views of power and privilege," Barack Obama said during the ceremony. "And the way that he would take extraordinary care and precision and vision in recognizing the beauty and the grace and the dignity of people who are so often invisible in our lives and put them on a grand stage, on a grand scale."

With that in mind, painting the President of the United States completely flipped Wiley's usual script. "The painting took about a year, and part of it had to do with just trying to conceptualize it, trying to put it in proper historical framework," Wiley says. "If you look closely at it, it is incredibly detail-oriented; trying to get every little individual hair ... it’s a type of painting that’s on steroids. It’s a type of painting that is high-stakes, and boy did I enjoy it."

Sherald, who painted Michelle Obama's portrait, is the lesser known of the two artists, and she had a major breakout with a 2016 portrait competition at the National Portrait Gallery — which Sasha and Malia Obama actually visited with their schools. Sajet found Michelle's choices during the portrait process to be "very much sort of Michelle’s way."

The more black-and-white coloration of Sherald's portrait of Michelle Obama was intentional, Sajet says, as it was "based on a photograph she has of her grandmother." Most older portraits of black Americans were photographs, rather than paintings, since painted portraits were largely reserved for white, land-owning Americans, Sajet explains. So in that way, Sherald was linking Michelle Obama to the nation's racial history.

Sajet was initially struck by Michelle Obama's face in her portrait, and ultimately decided it showed "real introspection of what she’s thinking to herself." Meanwhile, Wiley explains that Barack Obama's face in his portrait shouldn't indicate that he's thinking over one topic in particular. "I spent hours and hours, hundreds of hours, staring into his face, working on every aspect of his complexion. Insofar as you’d like it to be about one singular moment, it’s really about an entire life that you’re trying to picture on an image," he says.

Now, the Obamas have an entire life ahead of them to go back to the National Portrait Gallery and check out the paintings. And when they do visit, they've apparently got their very own expert guide. According to Sajet, once when the former first family visited the museum, they were asked if they wanted a tour guide. "No, I’ve studied this, I can do the tour," Malia responded, according to Sajet. I, for one, would love to hear her analysis of her parents' new portraits.