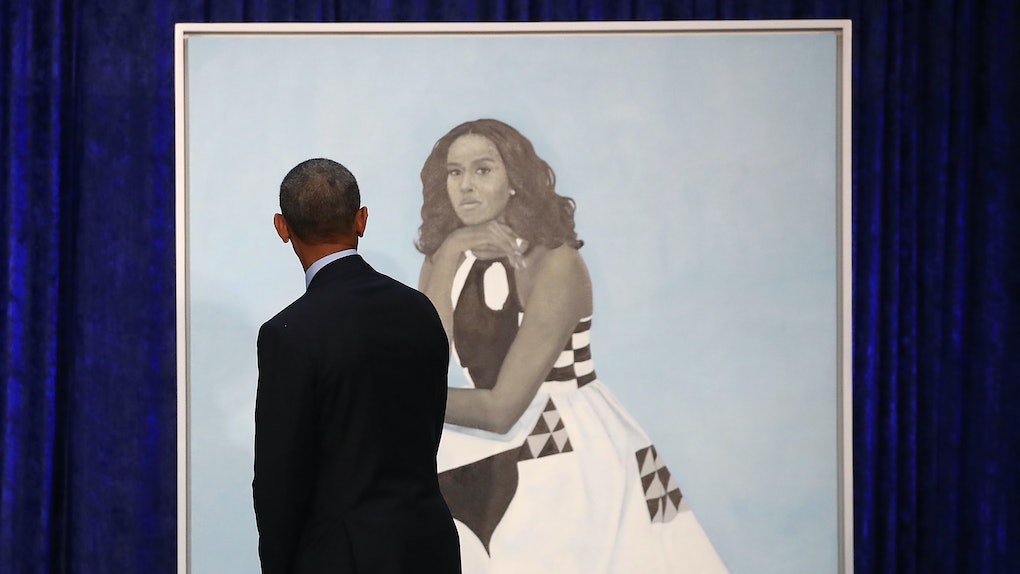 Whether or not you agree with former President Barack Obama's political views, it is difficult to ignore that the man sure does have a way with words. He also has a knack for slipping in an unexpected joke or two whenever he gets up to a podium to speak. Couple that with the palpable love between Obama and his wife, former First Lady Michelle Obama, and you get his latest quote, which will definitely make you miss what was probably the hippest (possibly most adorable) couple to have resided in the White House. Barack Obama says Michelle Obama's new portrait shows her "hotness," and it will remind you how much you miss them.

The former White House residents were honored when their respective portraits were unveiled at the Smithsonian's National Portrait Gallery on Monday, Feb. 12, according to The Hill. They each had their own portrait revealed at the ceremony, and when Obama saw the rendering of Michelle, he thanked the artist, Amy Sherald, for capturing the unique qualities that make up his remarkable wife, according to The Guardian. He commended Sherald for "spectacularly capturing the the grace, and beauty, and intelligence, and charm, and hotness of the woman I love."

Are you swooning yet? I mean, not only did Obama so suavely compliment Michelle on her "hotness," but he also listed many of her other admirable attributes like her grace, intelligence, and charm. OK, I'm officially bummed (once again) that these two had to move from 1600 Pennsylvania Ave.

After Obama made the (completely accurate) observation of Michelle's "hotness" in her portrait, the former president paused for a moment and then chuckled presumably at what he just said. Now, the camera didn't pan to Michelle for a reaction, but I like to think that it was an approving nod in the vein of, "Yes, you better recognize."

Once you take a look at Michelle's portrait, you'll realize that Obama was just speaking the truth. Michelle called the artwork "amazing," and while joking about how she's the first person in her family to have a portrait in a gallery (Michelle's got jokes too, you guys) she admitted she was a "little overwhelmed" as well as "humbled and proud" to have her portrait hanging in the Smithsonian Portrait Gallery.

After Obama made his own shrewd observations about his better half, he took a look at his own portrait, which was painted by Kehinde Wiley. Obama's response to his likeness in the painting was more of a throwback to his "dad jokes" reputation (see any of his turkey pardons). His reaction wasn't exactly a joke, but his phrasing definitely gave you the impression that he is firmly back in the habit of wearing "dad jeans" on the regular. According to The Guardian, Obama conveyed he was impressed with what he described as an "extraordinary" portrait when he said, "How about that? That’s pretty sharp."

OK, so that wasn't really a cheesy, classic dad joke, but I'd venture a guess that not many people under the age of 50 use the word "sharp" in their everyday vernacular. The painting is impressive, though, and Obama regularly using words like "sharp" (and totally reminding you of your own dad) is one of the reasons why you love and miss him.

Speaking of missing the Obamas, people immediately began flooding Twitter with reactions to the former president's "hotness" comment, and it was pretty evident that this little snippet of the Obamas reminded everyone exactly why the couple was (and is) so adored by many.

"This is so cute. I cannot stop smiling."

"Those who missed President Obama's habit of chuckling at his own jokes got a hefty dose of nostalgia this morning."

"I love the way he speaks of his wife. He is so great!"

"Not gonna lie, I would like to crawl under my desk and cry because I miss them so much."

According to ABC News, Obama also used this moment as an opportunity to commend Wiley, Obama's portrait artist, for "recognizing the beauty and the grace and dignity of people who are so often invisible in our lives..." Highlighting the "invisible" people, Obama added, "that's part of what I believe politics should be about." Oh, Obama, he always knows how to bring it all back to what matters most.

So, while this classic moment from the Obamas probably has you flipping through that Obama scrapbook you made to help you get through 2017, you can now take a trip to the Smithsonian National Portrait Gallery and get an up-close look at the new portraits of your favorite couple.