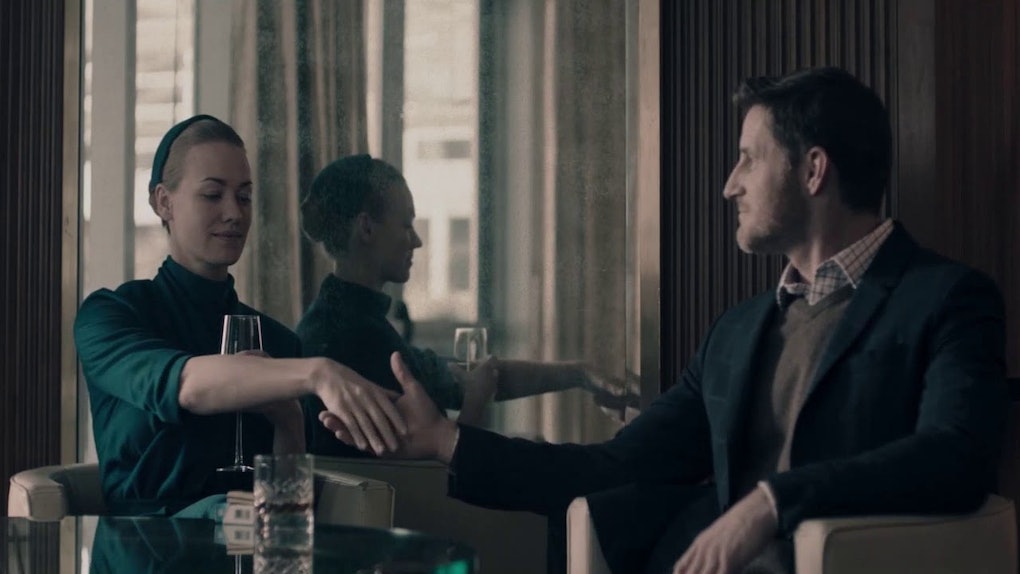 Who Is Tuello On 'The Handmaid's Tale'? Here's What You Need To Know

When The Handmaid's Tale premiered in 2017, it mostly followed the premise of the novel on which it was based. June, known as Offred, had very little awareness of the wider world, trapped under a giant bonnet, and cut off from any source of news or information. When the show expanded beyond those borders in Season 2, it confirmed the United States of America did still exist in some form (Alaska and Hawaii). Also, agents of the USA were working in Canada in hopes of taking down the Gilead government and taking back their country.

Mark Tuello was one of those agents. The show introduced him during Season 2 Episode 9's trip to Canada by the Waterfords, planting himself at their hotel bar to stake out Serena Joy as the weak link in the chain. His hope was that offering her a way out of Gilead, and perhaps an operation that could give her a baby would be enough to jump ship.

Serena Joy was unpersuaded, but the relationship had begun. When Serena returned to Canada to visit with Nichole in Season 3, it was Tuello who met her at the airport and brought her normal clothes. He also pushed her again about defecting, slipping her a satellite phone if she ever wanted to get in touch.

After seeing how far Fred was willing to go to step up in power, Serena made her choice. She told him they were going to make a deal with Tuello and meet with him about getting Nichole back. Fred, fool that he is, believed Serena meant kidnapping Nichole back to Gilead, where they could raise her together.

She did not. Instead, she traded in Fred to the Canadian authorities, claiming that everything she'd done with him was under duress. She was willing to turn crown's witness in the case against her husband, in exchange for custody of Nichole.

Tuello seemed sympathetic to Serena, arranging not only for her to have the baby, but have newspapers brought to her as well. Perhaps he was even a little attracted to her. But that didn't last long.

Once Fred realized he'd been betrayed by the wife that was always smarter than he was, he vowed revenge. And so he told Tuello the truth of how Nichole was conceived. In her desperation to get Offred out of the house, Serena forced her to have unprotected sex with Nick to produce the child.

As Tuello said point-blank to Serena Joy as he had her arrested: "It's still rape, Mrs. Waterford." Tuello is no fool. Serena might have given him Fred Waterford, but she was always the brains and personality behind Gilead. Justice will be served.