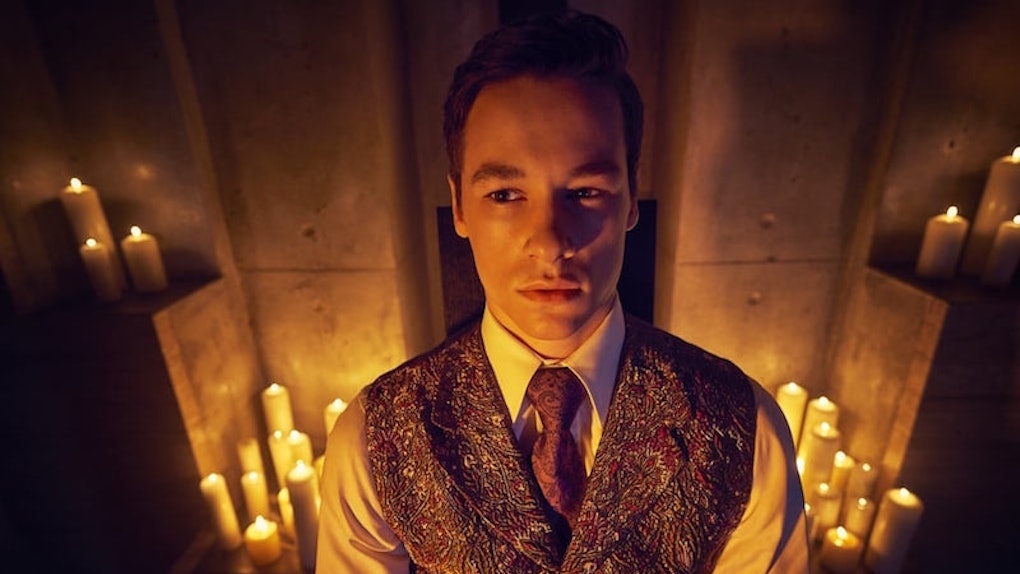 Who Is Timothy On 'AHS: Apocalypse'? Kyle Allen Is A Newcomer On The Show

Although American Horror Story: Apocalypse is going to bring back a ton of familiar faces from past seasons of the anthology series, it's premiere episode on Wednesday night kicked off the new story by introduced a bunch of new characters, who will clearly be playing a major role in the post-apocalyptic season. Most notable is Timothy, by all accounts a regula teenage boy who may be hiding something major, played by AHS newcomer Kyle Allen. So who is Timothy on AHS: Apocalypse? Let's break down everything we know about the newly added main character.

We first meet Timothy Campbell pretty early on in the new season premiere. He is at home with his family, nervously awaiting an email to see if he got accepted into UCLA. On a positive note, he does get accepted, but that is far outweighed by the negative aspect of, you know, the whole world coming to an end. As the nuclear apocalypse begins, heavily armed agents bust into Timothy's house and demand that he come with them. Why? Well, according to them, Timothy possesses some sort of special DNA component that is presumably prized among people hoping to rebuild the human race following the apocalypse.

That's definitely the big mystery involved with Timothy — what is this mysterious genetic component that makes him so valuable? After he is taken by the guards, Timothy quickly meets another person taken for her genetic makeup: a girl named Emily, played by Ash Santos. Then the two of them meet Wilhemina Venable, the incredibly strict caretaker of Outpost Three, an underground safehouse which will serve as the main setting for the season.

Ms. Venable explains that Timothy and Emily are what they refer to as Purples, an exalted group determined to survive the apocalypse. Outpost Three also houses Grays, who are basically slaves to the Purples. As for Ms. Venable, though, she clarifies that she is not considered either color, and is rather at the outpost as the face of the mysterious Cooperative, which she says is a group of geniuses who set up these outposts and their procedures.

Surprisingly, the premiere episode also includes a massive 18-month time jump, showing how insanity has set in amongst all of the Outpost Three inhabitants. But Timothy and Emily are actually keeping things together, thanks to the fact that they have been sneakily keeping up a romantic relationship for the past year and a half below ground. But as Wilhemina Venable explained when the two were first admitted into Outpost Three, relationships and especially sex are expressly forbidden within the walls. Hmm, something tells me that this relationship between Emily and Timothy is not going to lead to a happy ending...

More like this
10 Quotes From Netflix's 'Enola Holmes' That Are So Freaking Relevant
By Rachel Varina
What Happened To The Waterfords In 'The Handmaid's Tale' Season 3? A Lot, TBH
By Ani Bundel
Who Plays Mal In 'Shadow And Bone'? You May Have Seen Archie Renaux Before
By Abby Monteil
Stay up to date