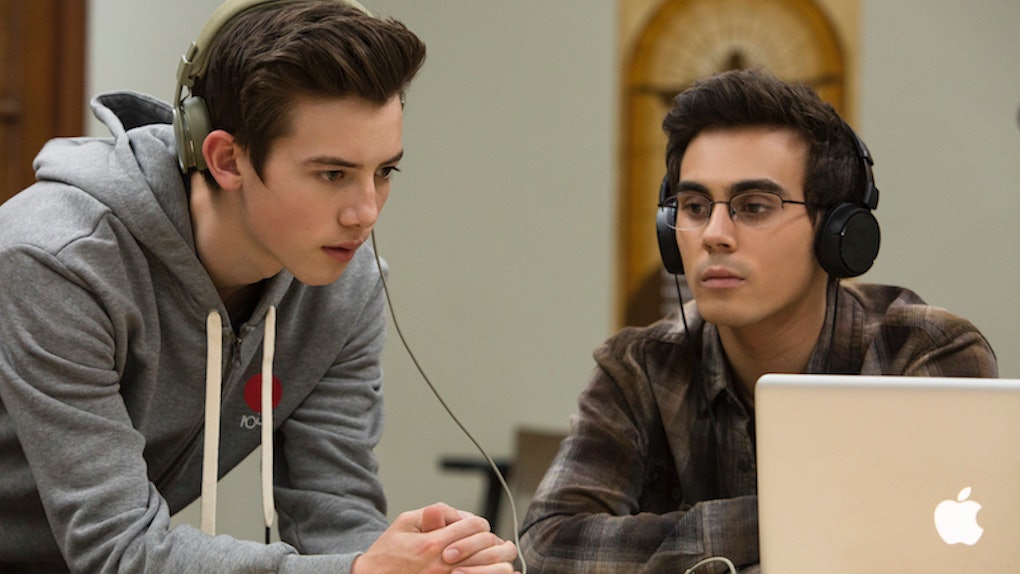 Who Is The Turd Burglar On 'American Vandal' Season 2? Let's Go Over All The Suspects

Peter and Sam are back to investigate another gross-out high school mystery, and American Vandal's second season investigation is even messier than the first one. This time around, Peter and Sam are shifting their focus to a private school called St. Bernardine's, which recently experienced a massive "brown out" when somebody put laxatives in the cafeteria's lemonade. After two more poop-related crimes come to light, it is up to Peter and Sam to answer the new season's central question: Who is the Turd Burglar on American Vandal Season 2?

Just like in Season 1, this question is just as much a mystery for viewers as it is for our on-screen investigators. Thankfully, Peter and Sam have some solid leads to go off of to get started. To help you along the new season, let's go over all of the major Turd Burglar suspects, and you can see who you think might end up being the culprit. Spoiler alert: The rest of this post will include details from the first five episodes of American Vandal Season 2. It will not reveal anything from the season finale.

First up, we have public enemy number one: Kevin McClain. Kevin has taken all of the punishment for being the Turd Burglar from the school, and there are a lot of very suspicious things that do point to Kevin being the one who poisoned the lemonade. After all, he made sure to sit by his rival to get a full view of him embarrassing himself, and he knocked over an elderly priest's lemonade before he could drink it, as if he knew what would happen. Plus, he had been bullied for years by his fellow students after he had poop stains on his pants, earning him the nickname Sh*tstain McClain.

The evidence seems pretty damning against Kevin, but the way that he was prosecuted also feels incredibly fishy. Kevin wound up admitting to the charges after the school's faculty broke him down, not allowing him to leave for hours after school. So, did Kevin really do it, or was he just an easy target to pin the crimes on?

The other major suspect is DeMarcus Tillman, the superstar athlete of St. Bernardine's. As the school's sports star, DeMarcus is untouchable, meaning he could do pretty much anything he wants and totally get away with it. But he seems to genuinely love the school and his fellow students, so why do it? Well, the fact that he idolizes a former St. Bernadine's prankster doesn't look great, plus Chloe Lyman claims she saw a Turd Burglar card in his wallet. Maybe he became the Turd Burglar to pull off a great prank rather than as an act of vengeance. He definitely had the access, but would DeMarcus really do something that heinous?

DeMarcus may look like one of the main suspects, but as the new season goes on, his best friend Lou actually comes off the shadiest. Lou is basically DeMarcus' assistant rather than his friend, and constantly plays second fiddle to him both on and off the court. Could Lou's jealousy of DeMarcus finally have reached its limit? Could he have planted that Turd Burglar card to take his best friend down and become the star basketball player himself?

As long as we are talking about best friends, we have to bring up Kevin McClain's right hand man Tanner as well. It seems pretty suspicious that Tanner would turn in his best friend immediately after the "brown out" without a second thought. Maybe he orchestrated the whole thing in order to make Kevin look guilty to take eyes off of him.

As the season goes on, Peter and Sam discover a couple more possible suspects, one of which is St. Bernardine's resident rich kid, Jenna Hawthorne. After becoming something of a pariah for posting a misleading photo of herself and Kendall Jenner, Jenna definitely had the motive to get back at the school, and it is definitely suspicious that her family's company makes the exact laxative used in the "brown out." Hmm...

And finally, we have Drew Pankratz. Drew is a theater kid who was relatively well accepted before photos of him in a diaper leaked to the school. Since then, he has been constantly bullied, getting diapers thrown at him after his performances. The diaper element seems to perfectly fit in with the poop crimes, so could Drew have orchestrated it all as a poetic revenge scheme? We will just have to keep watching the new season to see who the Turd Burglar really is!