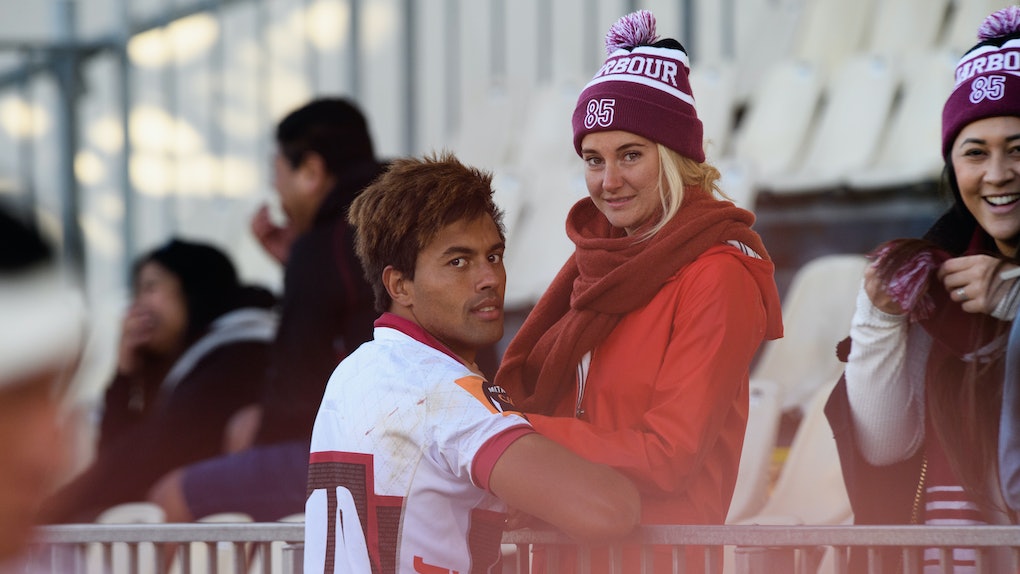 Who Is Shailene Woodley Dating? Ben Volavola Is A Rugby Star

2017 has been a great year for Shailene Woodley's career. The 26-year-old starred in one of the most talked-about TV events — the HBO miniseries Big Little Lies — and she even received a Golden Globe nod for her riveting performance. The actress keeps relatively private when it comes to her personal life, but who is Shailene Woodley dating? She has recently been romantically linked to a rugby star named Ben Volavola.

Volavola is an Australian-born Fijian who currently plays for the North Harbour team in either the fly-back or full back positions. (And, no — we don't claim to know what those mean exactly.) But Volavola is obviously skilled in the sport, considering he competed in all four matches of the Rugby World Cup in 2015. You might be wondering how Woodley got together with an athlete over 5,000 miles away from Hollywood, but the pair reportedly met in Fiji where she's been filming an upcoming movie called Adrift. Woodley and Volavola have been spotted hanging out in New Zealand and she was seen cheering him on from the sidelines during his practice. She even showed off her fandom by sporting a hat with his team's name on it. Aww.

Actress and activist Woodley is relatively active on social media, but it seems she's chosen to keep Volavola's face off her Instagram posts since they've been allegedly dating. She did hint at a relationship with an October pic of two intertwined hands. The caption read: "pillars. are. everything. #pleaseshowupforsomeonetoday." Woodley posted another photo a few days later that revealed a beautiful lush view and what appeared to be her and another person enjoying a picturesque waterside picnic.

Woodley has opened up about her approach to relationships in the past, admitting to InStyle back in 2014 that she has "zero rules" when it comes to the whole dating thing. She explained,

I have zero expectations and zero rules. I'm open ... I can't see it being another actor, except that they understand this lifestyle. Hey I could fall in love with an Aussie and move to Australia. Who knows!

Hmm, that three-year-old geographical prediction wasn't so far off...

Woodley isn't one to publicize her romances, though she has been linked to musician Nahko Bear of the band Nahko and Medicine for the People in the past. There were also rumors that she was involved with her Divergent co-star Theo James. Neither relationship was confirmed.

What does true love mean to Woodley? She told Elle back in 2015:

When you're truly in love, for me, you're my lighthouse! You're somebody who holds me high, keeps me safe, you've got my f*ckin' back. You also love me whole, wild and free. You let me do me and I'm gonna let you do you! And I'll be the home that you return to.

Woodley has some big roles on her plate, as well as a busy awards season in the coming months. Big Little Lies dominated the Golden Globe nominations — the fan favorite miniseries earned six nods. Woodley is up for Best Supporting Actress in a Series, Miniseries, or Motion Picture Made for TV alongside her co-star Laura Dern.

Viewers of Big Little Lies rejoiced earlier this month when HBO announced the compelling hit would be returning for a second season. It's set to premiere in 2019, according to Vulture.

In addition to starring in the film Adrift, Woodley will lend her voice to the 2019 animated feature Arkie. We look forward to seeing the talented and outspoken actress continue to do her thing, both on screen and off. And we can't wait for her to reunite with her BLL co-stars on the red carpet. Who knows? Perhaps she'll take her new beau along as her date.