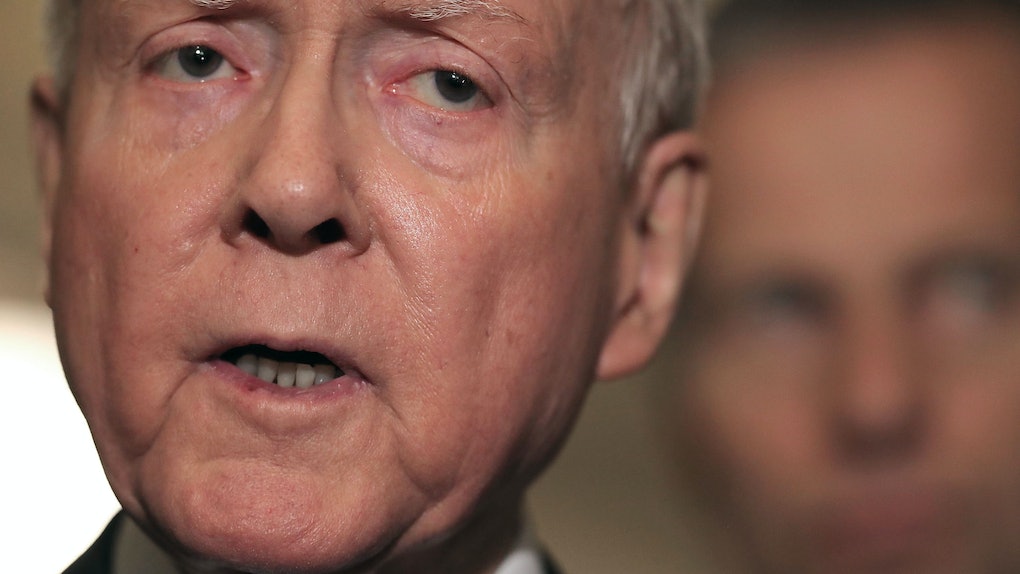 Who Is Orrin Hatch? The Utah Senator Is Resigning, & It’s Kind Of A Big Deal

What has already promised to be an interesting mid-term election just became more riveting. In a somewhat surprising move, Orrin Hatch, the Republican senator from Utah, announced on Jan. 2 that he will not seek re-election this year. Hatch is the longest-serving Republican in the Senate, having taken office in 1977. And many believe that Orrin Hatch's retirement announcement will pave the way for once-presidential hopeful Mitt Romney to take the Senate seat.

Hatch released a brief two minute video announcing his decision on Jan. 2, 2018 — the first day of the new year's Senate session. He said, “Every good fighter knows when to hang up the gloves. And for me, that time is soon approaching. That’s why after much prayer and discussion with family and friends, I’ve decided to retire at the end of this term.”

And while many Utahns are reportedly ready to say goodbye to their long-time representative, with almost 8 in 10 surveyed saying that Hatch should retire, one high-powered individual is decidedly going against the flow of popular opinion: President Donald Trump has reportedly spent a significant amount of time and energy trying to convince Hatch — who is very publicly loyal to Trump and his agenda — to run again.

After all, the alternative to Hatch would, in all likelihood, according to The New York Times, be OG #NeverTrump-er, Mitt Romney, former Governor of Massachusetts and 2012 presidential candidate. This could be a problem for the president, as many experts expect a would-be-Senator Romney to be a chief Trump antagonist.

Hatch is a key Trump ally in the Senate, and his retirement would be a huge loss to the president.

Hatch's history in the Senate is one of bipartisan work: in 1993, he recommended Ruth Bader-Ginsburg to then-President Bill Clinton for the Supreme Court. He also proposed the DREAM Act, which would have given undocumented individuals a path to amnesty and which later became the Obama-era executive order, DACA.

But, of late, he has become known as a Trump loyalist, calling the mercurial leader "one of the best I've served under." He has, additionally, become relatively politically extreme: he suspended committee rules in order to confirm Trump's now-disgraced former Secretary of Health and Human Services Tom Price, and he was one of 13 Republican senators who wrote the American Health Care Act (AHCA), the much-loathed Affordable Care Act (ACA) repeal bill. Hatch resisted holding hearings during the numerous attempts to repeal the ACA (aka Obamacare) over the summer, only doing so during September's last-ditch attempt, the failed Graham-Cassidy bill. Further, he supported the Trump-backed Alabama U.S. Senate candidate Roy Moore, who has been accused of sexual misconduct with teenage girls (Moore has denied the accusations).

But Trump was reportedly desperate not to lose Hatch. In early December, according to CNN, Trump visited Utah for the first time (as part of an announcement that he would be shrinking several federally protected parks), and he stumped for the seven-term senator. During his speech, Trump praised the senator and said that he hoped Hatch would "continue to serve your state and your country in the Senate for a very long time to come."

Now, the president is "very sad" about Hatch leaving the Senate, per White House Press Secretary Sarah Huckabee Sanders, and he also tweeted after Hatch's announcement that the senator would be "greatly missed."

Why, you may be wondering, does the president care so much about an 83-year-old who just wants to retire and enjoy his last years? Well, it's not so much about Hatch as it is about Romney, the likely frontrunner to replace Hatch.The short version: Romney made very clear during the Republican presidential primaries that he does not like Trump.

Way, waaaaaay back in March 2016, Romney became the face of the conservative "Never Trump" movement when he gave a nearly 20-minute speech, in which he called the then-candidate a "con man" and a "fake." In that same speech he also lambasted Trump's economic plan (which Hatch supported and helped pass in late Dec. 2017), saying that it would sink the country into a "prolonged recession." He also said Trump's anti-Muslim rhetoric was dangerous for the country and that Trump represents "a twisted example of evil trumping good."

"Dishonesty," Romney said, "is Donald Trump’s hallmark." It was a hell of a speech.

Though later, Romney ended up eating his words: after the election he crawled back to the now-president only months after calling him "a phony, a fraud" when Trump announced Romney was being considered for Secretary of State. Romney and Trump were photographed meeting for dinner to discuss the possibility of Romney accepting the cabinet position.

Just look at the eyes. Anyways, Trump is well known for holding grudges, and now that Romney has returned to his former #NeverTrump glory, Trump likely wants to prevent an anti-Trump Republican from joining the Senate.

And according to experts, a Senator Romney would be welcome news in a state where he is loved.

Hatch's retirement announcement comes after months of rumors and of Hatch (and his office) dodging questions about the senator's plans for 2018. Rumors of Hatch's impending retirement first surfaced in April 2017, per The Atlantic, when insiders first took notice of Romney's interest in a bid for Hatch's seat. Whispers were then renewed in late October when the magazine reported that Hatch has been planning his retirement with close allies, and it would just be a matter of time.

Per that same Atlantic report, Romney only planned on running if Hatch were to retire, and many consider him a shoe-in in the conservative state. But even if Romney had decided to run against the incumbent Hatch, he would have likely had a good shot at winning: according to The Hill, a survey done in August showed that 78 percent of Utahns wanted Hatch to retire at the end of the 2018 term, 12 percent thought he should "probably" run, and only 7 percent said he should definitely run.

But Romney is not the only one reportedly running for Hatch's seat, so don't count it as a done deal yet. There's also Jenny Wilson, a Democrat and a member of the Salt Lake City's City Council. The Washington Examiner also reported that Boyd Matheson, a former chief of staff to Utah Senator Mike Lee, was thinking about running against Hatch in the Republican primary.

So, while many have written this race off as a wash, now that the unpopular senator is stepping down, only time will tell.