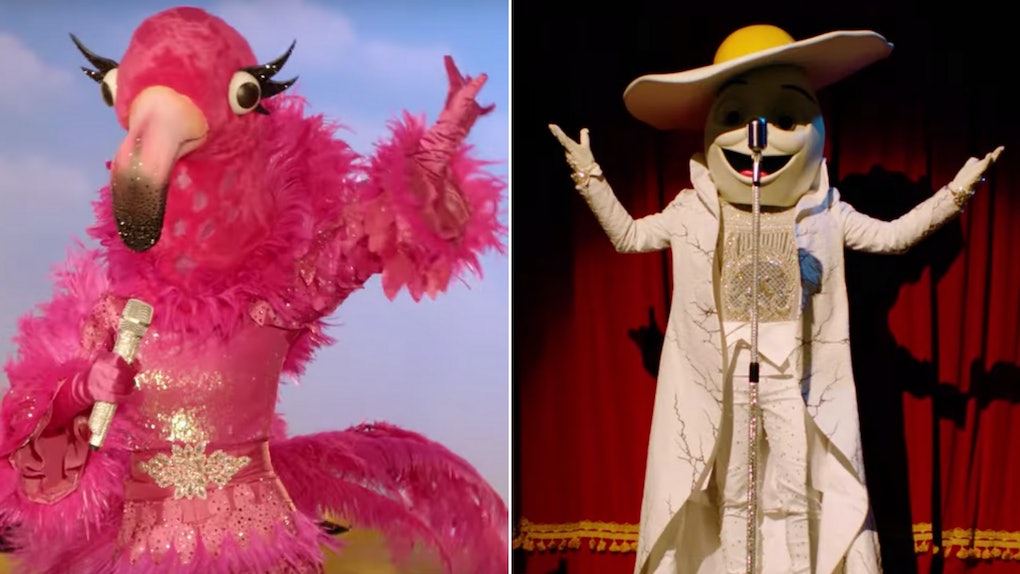 Who Is On 'The Masked Singer' Season 2? The New Promo Shows The New Masked Celebs

Earlier this year, America became absolutely transfixed by Fox's new singing competition series The Masked Singer, and it is easy to see why. Adapted from a hugely popular South Korean series, the new show challenged viewers to try to figure out which celebrities were belting out hit songs behind intricate masks. And now, Fox is gearing up for round two, which is upping the contestant count from 12 to 16. So, just who is on The Masked Singer Season 2? The show just dropped the first look at a handful of the new contestants, so it is officially time to start guessing.

The most notable change that the new season of The Masked Singer will make from Season 1 is upping the number of contestants. This time, 16 celebrities have signed on to hide their identities and show off their singing chops for the world. Presumably, Season 2 will also be able to get some even more surprising celebrities to participate after the debut season was such a success, so the guessing game might be a bit harder this time around.

Six contestants from the new season of The Masked Singer have been introduced in two brief promos, giving fans their first look at Season 2. The promos, one of which briefly shows the contestants singing parts of "The Greatest Show" from The Greatest Showman, introduces six new creatures: the Fox, the Eagle, the Flamingo, the Leopard, the Skeleton, and the Egg. Yep — for some reason there is an egg competing among the other creatures. Check out the new promos below:

Of course, it is still way too early to confidently make a guess at who these six masked celebs could be, but as Season 1 showed us, the costumes themselves offer tiny hints at who could be beneath them. That is still not a lot to go off of, but maybe it means that the Egg is a celebrity chef of some sort, or that the Skeleton is someone famous for horror.

Actually, the best clue about a contestant appearing on the new season is about a creature that was not introduced in these promos. In a recent interview with Entertainment Weekly, the show's costume designer revealed that the Butterfly will be another contestant on this season, and that her costume was inspired by Victoria's Secret runway shows. Could that mean that a famous model will be masked as the Butterfly this season?

The possibilities are endless, which is what makes The Masked Singer so addicting. The first season of the show included stars like Joey Fatone, Gladys Knight, and Rumer Willis as the anonymous singers, and ended with the big reveal that the Monster, who won the debut season, was actually rapper T-Pain all along. With the extended second season, there are even more possibilities for which celebrities could be anonymously singing their hearts for all of America, so fans will have to tune into the premiere to see if they can pick up on any clues.

More like this
This 'The Handmaid’s Tale' Season 4, Episode 5 Promo Shows June In Chicago
By Ani Bundel
These LGBTQ+ Reality Dating Shows Add A Little Bit Of Spice To The Genre
By Dylan Kickham
Juliette Porter Teases 'Siesta Key' Season 4 Drama — EXCLUSIVE
By Rachel Varina
Stay up to date