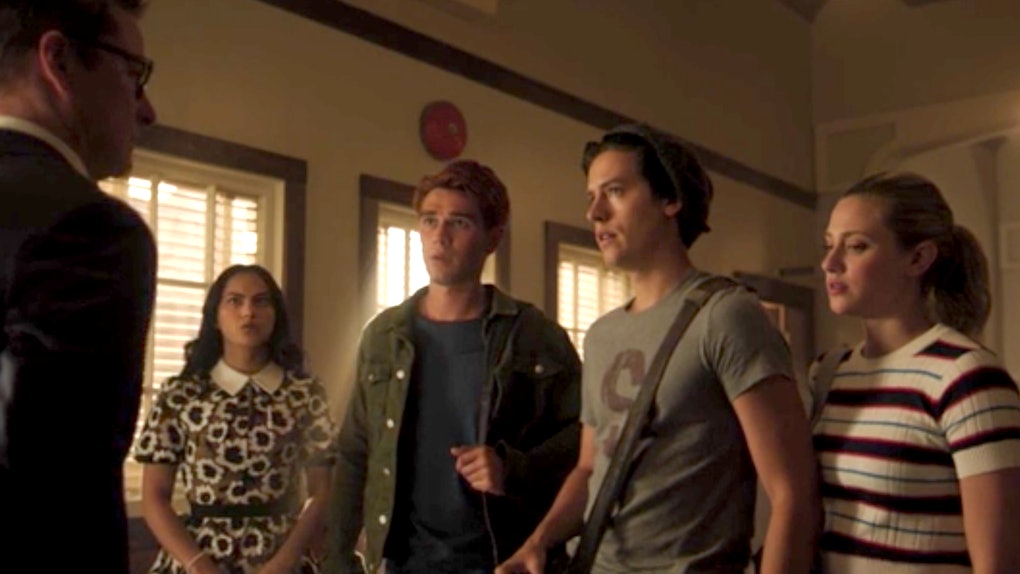 Who Is Mr. Honey On 'Riverdale'? Season 4 May Have Its New Villain

Every season of Riverdale has a new big bad who terrorizes Archie, Betty, Veronica, and Jughead: Season 1 revealed Cliff Blossom to be a murderer, Season 2 was all about unmasking the Black Hood, and Season 3 pulled double duty with both the Gargoyle King and The Farm. It's not totally clear yet who the new villain for Season 4 may be, but the Oct. 16 episode did introduce a handful of new characters who have serious bad-guy potential. So, just who is Mr. Honey on Riverdale, and could he be the Season 4 villain? Let's talk about the shady new character the teen drama just introduced.

Spoiler alert: This post contains spoilers for Riverdale Season 4 Episode 2, "Fast Times at Riverdale High." Since the Season 4 premiere of Riverdale was a standalone episode dedicated to Luke Perry and was fully focused on Fred Andrews' death, Episode 2 actually served as more of the true premiere for the new season in terms of its story. And the episode definitely set a whole new tone for the show. Following the trippy, supernatural bent of Season 3, it looks like Season 4 will take the series back to its origins by refocusing on the high school drama. "Fast Times at Riverdale High" saw Jughead get into a fancy new prep school, Reggie stand up to his abusive father, Betty work with her newfound half-brother to try to find her mom, and Veronica deal with Riverdale's surprisingly rampant paparazzi problem.

But the real intrigue came in the form of the handful of new characters that the Season 4 kickoff episode introduced. First up was Mr. Honey, Riverdale High's new principal who immediately made it clear he is going to be super strict. Honey informed Archie, Betty, Veronica, and Jughead that he will have order and discipline at the school after they showed up late to the first day of senior year.

Honey went on to make a powerful enemy by canceling Cheryl Blossom's back-to-school dance. To get around his rules, Cheryl threw a party at her home in place of the dance, where she promised her classmates that she would get rid of Mr. Honey before homecoming. To get this rivalry even more heated, Honey called the cops to shut down Cheryl's party, and Cheryl retaliated by plopping a gigantic beehive on his desk the next morning. Honestly, after the nonsensical roller-coaster ride of the Gargoyle King, it is kind of nice to watch these kids just indulge in some high school hijinks instead of investigating ritualistic murders.

Oh, and if you're wondering why Riverdale High has a new principal, let me remind you of what happened to Mr. Weatherbee. Last season, Weatherbee became one of the many acolytes of The Farm, and presumably ran off with Edgar, Evelyn, Alice, Polly, Fangs, and the rest of the cult after Betty found out Edgar's true, organ-harvesting plan.

As of right now, it is unclear whether Mr. Honey will evolve into a bigger villain or just remain a somewhat stereotypical no-nonsense principal, but he's definitely someone for fans to watch. Also, fans should probably be keeping an eye on Jughead's new prep school teacher Mr. Chipping and Betty's FBI agent half-brother Charles Smith. Viewers still don't know a lot about these new characters, and if Riverdale has taught viewers anything, it's never to fully trust anyone on this show.

Riverdale Season 4 continues at 8 p.m. ET on Wednesdays on The CW.