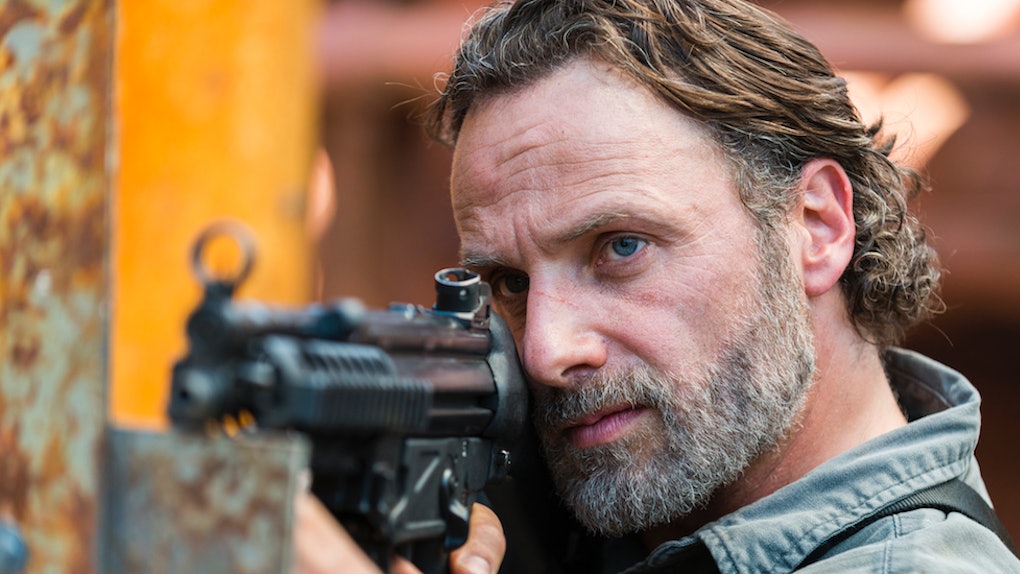 Who Is Morales? The War On ‘The Walking Dead’ Is Getting Real

Season 8’s second episode, “The Damned,” ended on a cliffhanger as Morales returned apparently out of nowhere, pointing a gun at Rick’s head and making everyone go "HOLY CRAP." But with the promotional trailer for Episode 3 that followed after the end of Episode 2, it seems pretty clear that Morales’ return is just a hint of things to come.

The trailer for Episode 3, "Monsters," is pretty blatant in the best way: it's not telling fans everything that's in the episode, but it's definitely telling us the things we want to know, namely that this war is about to get turnt. "Make no mistake," King Ezekiel says. "Our first victory will allow our second. Our second will deliver our third." And later, a surprisingly optimistic tone: "We have come this far," he says, "all of us, still here! And we will lose not one of our ranks."

Very inspiring and we band of brothers it might be on the outside, but Morales' return proves that — if you'll allow the analogy to continue — everyone's probably about to run into a wall of painful, painful arrows. Maybe metaphorically, maybe not.

First, a quick recap on you know, who Morales is. (If you were super confused as to why everyone was freaking out at the end of the episode just because someone was threatening to shoot Rick after an episode that was basically all about shooting people, well, don’t worry. You weren’t alone, everyone was confused.)

But to sum up, Morales is a survivor who we haven’t seen since all the way back in Season 1. He first showed up in the second episode of the season, "Guts," in which he was a survivor who went out into the Atlanta, Georgia area to scrounge for supplies. We later find out that his whole family survived the zombie outbreak — and we meet his wife, Miranda, and two children at the survivor's camp.

But things didn't go well for Morales: when the rest of the group decided to go to the Centers for Disease Control (CDC) to find out about a possible cure, he and his family chose instead to go to Birmingham, Alabama to try to find family members there. And that's all we heard from them. Naturally, everyone assumed that he and his whole family were dead. A very reasonable assumption.

But after he reappeared in the cliffhanger ending of "The Damned," cocking a gun at Rick's head, it was clear that he was not only alive, but on the side of the villains — namely, Negan's Saviors. And with the teaser trailer for Episode 3, "Monsters," it becomes even clearer that there are lines being drawn in the sand.

"My people are coming," Morales says in the trailer. "And we'll get you to Negan." Considering this is said with Rick frozen at gunpoint and alone, it's a pretty significant threat.

Between that, King Ezekiel's rousing speech, and you know — all the images of stalemates between sides, people captured, and fighters surrendering — it doesn't look great for Rick and company at the moment.

Fingers crossed we get some answers next week. And that they're, you know, not ones that say "all your faves are dead." We have Game of Thrones for that.