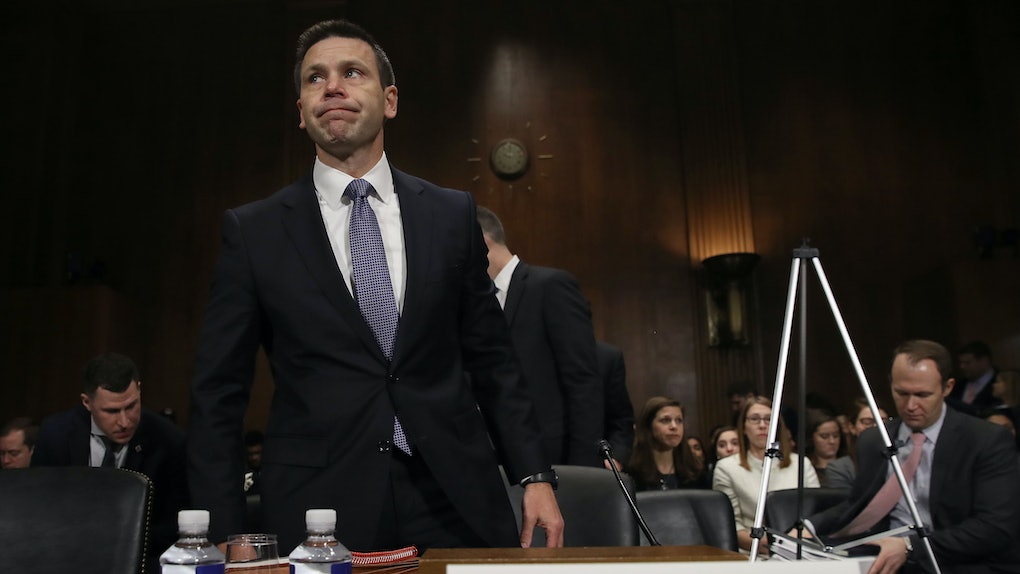 Who Is Kevin McAleenan? Kirstjen Nielsen's Replacement May Not Be Around For Too Long

It may be a few months into the new year, but it looks like the Trump administration is wiping the slate clean in some departments. Since news broke on Sunday, April 7 that Secretary of Homeland Security Kirstjen Nielsen would be stepping down from her position, a lot of us have been wondering what her replacement will be like. So, who is Kevin McAleenan? The thing is, he might not be around for too long.

On Sunday, April 7, President Donald Trump took to Twitter to announce that Kirstjen Nielsen would be resigning from her position effective immediately. However, Nielsen also said in a statement on April 7 that she would still serve in her position until Wednesday, April 10 to assist with the "transition." Nielsen has served in the role since 2017. In another tweet, Trump announced that current Commissioner of U.S. Customs and Border Protection Kevin McAleenan would be the acting secretary of homeland security until a full-time replacement is found. While McAleenan is currently replacing Nielsen in her position, he will only act as the "short-term" homeland security secretary. There's been no word as of yet who will replace Nielsen full-time. Elite Daily reached out to the Department of Homeland Security (DHS) for comment on McAleenan replacing Nielsen and whether the department is searching for a full-time secretary, but did not hear back in time for publication.

According to CNN, McAleenan was previously a part of the Obama administration but was sworn in as commissioner of U.S. Customs and Border Protection (CBP) on March 20, 2018. According to USA Today, McAlennan is one of the officials who helped carry out Trump's more controversial moves on border control, such as separating immigrant families as a part of the administration's "zero-tolerance" policy, and firing tear gas into a crowd of migrants attempting to cross the border in November 2018. Elite Daily previously reached out to DHS for comment regarding the use of tear gas at the border, but did not hear back. Since his appointment as commissioner, USA Today reports that McAleenan has tweaked his agency's policies regarding immigrant detention, such as ordering a faster notification of deaths in U.S. custody, and medically screening children held in detention. Elite Daily reached out to CBP for comment regarding McAleenan's role in CBP policy, but did not immediately hear back.

Nielsen's resignation from DHS is coming at a tricky time for the Trump administration. In recent weeks, the U.S.-Mexico border has once again become a talking point, with the president threatening to shut down the border over immigration concerns. (He later backed off the threats.) In addition, CNN reported that Nielsen might not have resigned willingly and was pressured to do so, which is not out of the realm of possibility considering rumors that Trump and Nielsen clashed over immigration policies. Elite Daily reached out to the White House for comment on Nielsen's resignation and its cause, but did not hear back in time for publication.

On April 7, Nielsen took to Twitter to share her resignation from DHS, and thanked Trump for the opportunity to work with him. She wrote,

Its been an honor of a lifetime to serve with the brave men and women of @DHSgov. I could not be prouder of and more humbled by their service, dedication, and commitment to keep our country safe from all threats and hazards.

So now with Nielsen out and McAleenan serving only temporarily, who will be the new official secretary of DHS? Currently, acting Deputy Secretary of Homeland Security Claire Grady would be the most logical choice in regards to going down the department line, but there has been no confirmation from Grady, DHS, or the White House as to whether she will be appointed.

You know what they say, out with the old, and in with the new. McAleenan's new role may only be temporary, but when it comes to this administration, there's no telling what could happen.