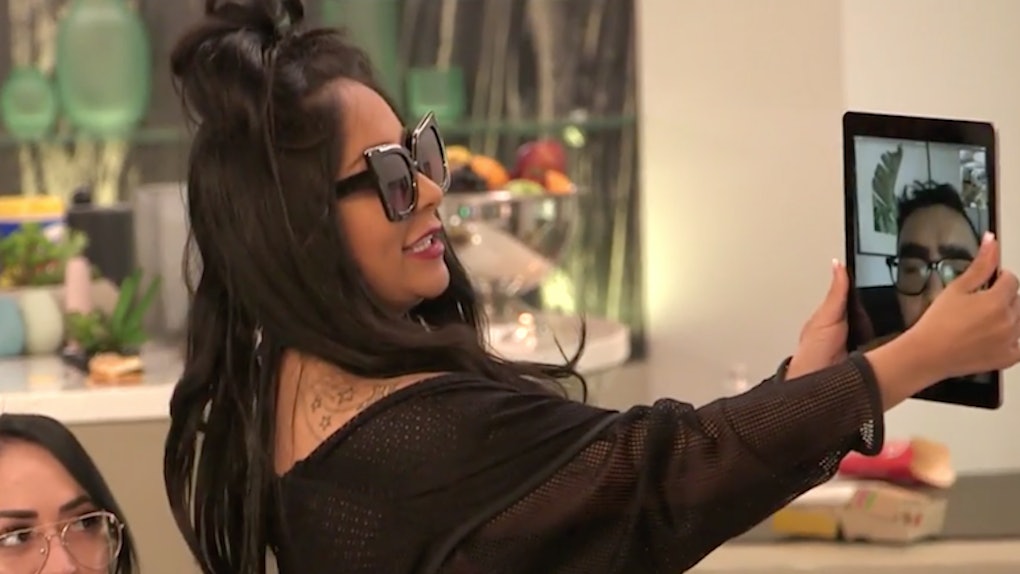 Who Is Joey? Snooki's Best Friend Makes An Appearance On 'Family Vacation'

Angelina just arrived on Jersey Shore Family Vacation, and now Snooki is about to add yet another new member to the Las Vegas house. After a conflict-heavy episode all about JWoww and Angelina's unsolvable friction with one another, a depleted Snooki decides it is time to call in her best friend Joey to liven things up... but not everyone is so happy about that idea. So before he makes his arrival, here's what Jersey Shore fans should know if they are asking, who is Snooki's friend Joey on Jersey Shore Family Vacation?

Fans who have been following Snooki for the past few years doubtless already know who Joey Camasta is, but to viewers who are just catching up with Snooki on Family Vacation for the first time since Jersey Shore ended, he is probably not a familiar name. Joey is a regular on Snooki's YouTube channel, and the two even host a podcast together called "It's Happening with Snooki and Joey." In his personal life, Joey is a makeup artist and comedian. The best way to get a taste for Snooki and Joey's friendship is to see them in action — the two recorded a "BFF Challenge" video a couple years back that will be the perfect way to see how these two besties joke around with one another.

Although Snooki and Joey clearly have a super fun and light-hearted friendship outside of reality television, Joey's arrival on Jersey Shore Family Vacation may be more drama than laughter.

Snooki decided to invite Joey to Vegas after all hell broke loose between JWoww and Angelina at the end of Thursday night's latest episode of Jersey Shore Family Vacation, hoping to bring in some light and fun energy amidst the tense chaos. But bringing in more people is the exact opposite of what JWoww wants. Jenni says that she feels this Vegas vacation has drifted too far from the family vacation that she was expecting:

This is a family vacation. This isn't a third-wheel friend vacation, and now I'm a little bitter.

At the very end of the episode, Jenni tells the rest of the house that she is planning on going home before Joey arrives. Of course, Snooki is upset by this, and seems to get angry at JWoww for deciding to go.

The episode ended before we got a clear sign on if Jenni was actually going to pack up and go then and there, but the drama between Jenni and Snooki will definitely come to a head in next week's episode. And that probably will not make for a super welcoming environment as Joey arrives in Las Vegas. At least everyone else seems pretty excited to see Joey. The only other cast member to seem apprehensive about Snooki's bestie making his arrival is Mike, who told the cameras: "Brace yourself, Joey is extra as f—." We will have to wait to see whether that is some real drama or just a playful side comment.

More like this
What Happened To The Rose Family After 'Schitt’s Creek'? 6 Theories
By Rachel Varina
These Tweets About Regé-Jean Page Leaving 'Bridgerton' Are Royal Bummers
By Cianna Garrison
These Fake 'Riverdale' Brand Names Are Even Better Than The Real Thing
By Rachel Varina
Stay up to date