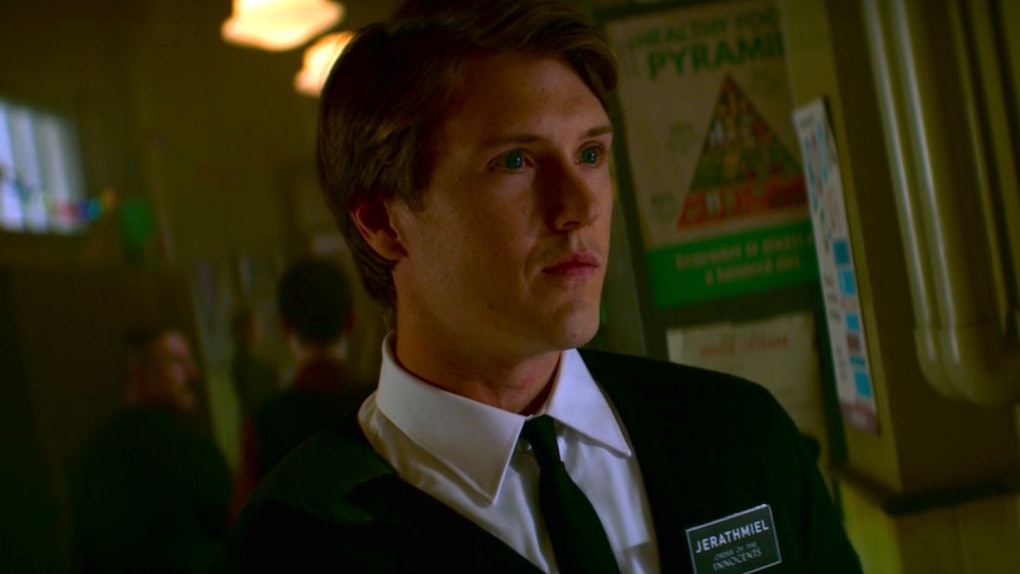 Who Is Jerathmiel In 'Chilling Adventures Of Sabrina'? The Witches Have A Scary New Enemy

The first part of Chilling Adventures of Sabrina was mainly just about Sabrina being introduced to the dark and dangerous world of witches and warlocks, but Part 2 expanded on the supernatural world in a ton of new ways. One of the most threatening new introductions is a peculiar organization called the Order of the Innocents, led by a creepy boy named Jerathmiel. So, who is Jerathmiel in Chilling Adventures of Sabrina? His true identity reveals an entirely new level of trouble not just for Sabrina, but for all of the witches.

Spoiler alert: This post contains plot details from Chilling Adventures of Sabrina Part 2 Episode 6, "The Missionaries." Right from the start, it is clear that Jerathmiel is bad news — his introduction scene is him torturing and murdering Luke, after all. Jerathmiel wears a suit with a large nametag and is creepily upbeat as he tortures Luke. As the episode title makes clear, he is a dark and violent play on missionaries, claiming that he wants to convert all witches to his religion (although that conversion process is really just murder). As his nametag makes clear, Jerathmiel belongs to something called the Order of Innocents, and he is torturing Luke to find out where the Church of Night is located.

As the episode continues, Jerathmiel also tries to kill Sabrina, although she is saved in the nick of time by one of Roz's visions. Sabrina then discovers the Jerathmiel is not the only weirdly evangelical witch hunter in Greendale — Hilda is attacked by a female member of the Order of Innocents and Nick is attacked by a crossbow-wielding boy named Gideon.

Although Dorian Gray manages to kill Gideon, the other two Order of the Innocents members track down the Church of Night and threaten all of the Academy of Unseen Arts students. Although it looks like the Weird Sisters made quick work of them, Jerathmiel and his partner begin glowing and he reveals their true identity: Yep, they are angels. I mean, who better to be the sworn enemy of witches than angels, after all?

And clearly, these angels are scary powerful. They are able to subdue the entire school of witches and then attempt to coerce them into converting faith before killing them. That is where things get really weird. Sabrina storms into the church to stand up to the angels, but they stifle her magical powers and shoot her with multiple arrows, leaving her dead on the ground. That is... until she somehow starts floating in the sky with white eyes and burning hands, speaking in some ominous, booming voice.

Yeah... it's not really clear what is going on with Sabrina, but whatever it is, it's super helpful! The fiery, floating, demonic Sabrina not only immediately kills both angels, but is also able to resurrect the two witches that they had already killed.

This massive surge in magical power in Sabrina is definitely going to be the big focus of the rest of Chilling Adventures of Sabrina Part 2, so viewers will just have to rest assured that some sort of explanation is coming.