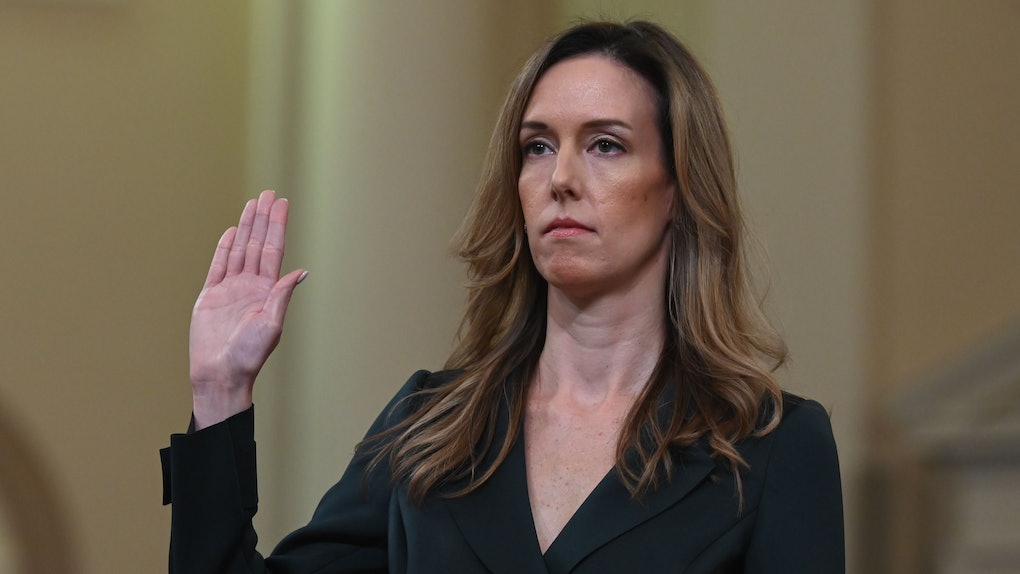 Who Is Jennifer Williams? Mike Pence's Aide Testified About The Ukraine Call

On Tuesday, Nov. 19, two key witnesses took the stand in front of the House Intelligence Committee to testify as a part of the impeachment inquiry against President Donald Trump. Jennifer Williams, an aide to Vice President Mike Pence, appeared before the House Intelligence Committee alongside Lt. Col. Alexander Vindman to weigh in on the president's July 25 phone call with Ukrainian President Volodymyr Zelensky. And, according to her, the call was definitely unusual.

Williams currently serves as Vice President Mike Pence's special adviser on Europe and Russia, though she is an employee of the State Department, per The Washington Post. Williams was one of the national security officials who listened in on the conversation between Zelensky and and Trump due to her role as Pence's adviser on Europe.

Her testimony before the Intelligence Committee came as part of the official impeachment inquiry into President Trump opened on Sept. 24, following an anonymous whistleblower complaint about the July 25 phone call with President Zelensky. In an emailed statement to Elite Daily, White House Press Secretary Stephanie Grisham referred to the inquiry as Democrats' attempt to "weaponize politics." But this isn't the first time Williams has testified. She also appeared in a closed-door meeting with the committee on Nov. 7 to share her testimony and the notes she took while listening to the phone call between Trump and Zelensky. A redacted transcript of William's testimony was released publicly by NPR on Nov. 16.

According to the transcript, Williams told the committee in the closed-door meeting that she was surprised to see Trump insist that Zelensky investigate former Vice President Joe Biden, and referred to it as "unusual." On Sept. 25, the White House released a non-verbatim transcript of the conversation, which confirmed Trump asked Zelensky for a "favor" regarding investigating Biden and his son Hunter. Williams noted that it was outside the norm for a call between two world leaders. "I certainly noted that the mention of those specific investigations seemed unusual as compared to other discussions with foreign leaders," she said in her testimony.

During the public hearing on Nov. 19, Williams answered questions pertaining to Pence's decision not to attend Zelensky's presidential inauguration in Ukraine in May. Initially, Pence had planned to visit Kyiv, Ukraine, for the inauguration, but was Williams testified that President Trump asked the vice president not to attend. She said she was not told why Trump had made that decision. Elite Daily reached out to Pence's team for comment on Williams' testimony, but did not hear back in time for publication.

Ahead of Williams' public testimony, President Trump took to Twitter to call out the national security official, and suggested she was staging a "presidential attack." Trump wrote,

Tell Jennifer Williams, whoever that is, to read BOTH transcripts of the presidential calls, & see the just released ststement from Ukraine. Then she should meet with the other Never Trumpers, who I don’t know & mostly never even heard of, & work out a better presidential attack!

Elite Daily reached out to the State Department for comment on President Trump's tweet about Williams, but did not hear back in time for publication.

Pence, on the other hand, has defended the phone call between Trump and Zelensky and told reporters in October that the president is concerned with foreign interference in elections. Pence said,

Prior to serving as Pence's aide, Williams worked within the George W. Bush administration as a political appointee to Secretary of Homeland Security Michael Chertoff, per The Times. She also worked in the State Department to tackle the humanitarian crisis in Syria. She joined the United States Foreign Service in 2006, and was later appointed as Pence's aide in April of this year.