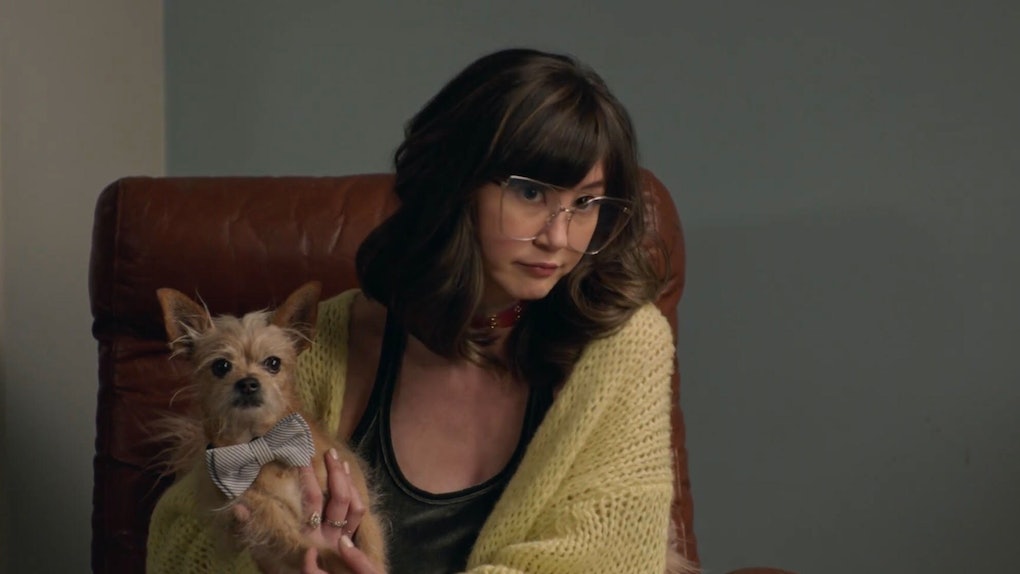 Who Is Harlow On 'Liza On Demand'? Kimiko Glenn's Character Is Perfection

Actress Kimiko Glenn's Instagram feed has a lot of cute selfies, quirky snaps with fellow cast members, and short singing videos. Many of her 1 million followers likely started following the actress when she debuted as Brook Soso, a charming prison inmate from the Netflix dramedy Orange is the New Black. But some of her fans may now know her as Harlow from Liza on Demand, a YouTube comedy series starring Liza Koshy. For those wondering exactly who Harlow is on Liza On Demand, you may be in for a surprise, because the quirky character is very different from Glenn's popular OITNB role.

In OITNB, Brook Soso, named after the actress Brooke Shields "except without the 'e' because [her parents] thought it would be a bit more original," was a very talkative hippie with strong convictions. Brook knew exactly who she was and had no problem ending up behind bars if it meant defending her beliefs, which is exactly how she made it into Litchfield Penitentiary in the first place.

In contrast, Glenn's character Harlow favors a more laissez-faire approach to her life. Not exactly one to be seen camping out in front of government buildings in a silent protest, Harlow prefers wearing a soft-pink kimono, drinking white wine with her roommates, and recounting her latest social media-related adventures. Probably the most stereotypically digital-age thing about Harlow is that she makes a living by profiting off the Instagram popularity of her puppy, Bark-Paul Gosselaar (seemingly named after the Saved by the Bell actor Mark-Paul Gosselaar). He has over one million Instagram followers and, in Season 1 Episode 1, was flown to Portland for a meeting with Nike so Harlow could discuss the details of his own shoe line. With this kind of social media following, Harlow believes the possibilities of her dog getting a makeup line, and maybe even a reality show, are very realistically in the future.

Harlow's life goes along with the general theme of the show, which highlights odd, non-traditional jobs in today's economy. In addition to Liza's various gigs she takes on to earn money, Harlow's side-hustle with Bark-Paul proves that sometimes, the path to paying your rent and figuring out your life doesn't necessarily mean you have to have a college degree and a 9 to 5 job.

Glenn's character is a perfect blend of absurdly delusional, yet strangely familiar and relatable. She'll make you shake your head in disbelief and laugh out loud, as you inevitably fall in love with her.

Aside from her role as Harlow, Glenn can also be seen as Gemma in the summer romantic comedy Can You Keep A Secret? alongside her OITNB costar Laverne Cox, and will appear in the TV movie Ghosting, which is expected to come out later this year. She also lends her voice to various projects, including the TV series Ducktales and Spider-man: Into The Spider-Verse. And who knows? She could expect to gain a lot more Instagram followers and maybe even get a shoe deal of her own like Bark-Paul once Season 2 of Liza on Demand premieres on Sept. 25.