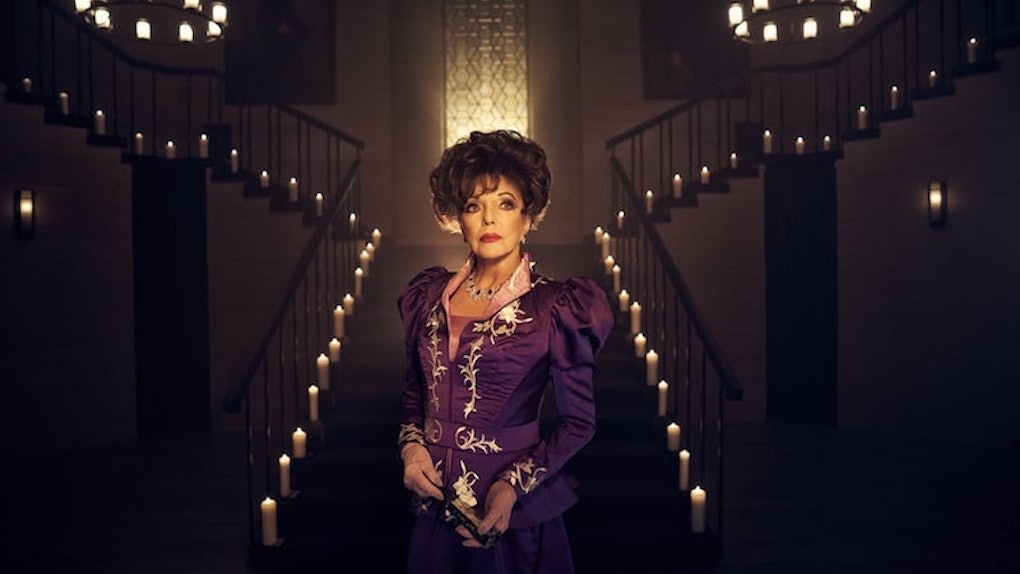 Who Is Grandma Evie On ‘AHS: Apocalypse’? Joan Collins Makes Her 'AHS' Debut

Although most fans associate American Horror Story with gore and creepiness, the macabre anthology series is also known for its campy silliness. That's where Joan Collins' character comes in on American Horror Story: Apocalypse. Wednesday night's premiere episode introduced fans to Evie Gallant, and made it clear that she would be the person providing the comic relief throughout the post-apocalyptic new season. So just who is Grandma Evie on AHS: Apocalypse? Let's go over how Joan Collins' new character might factor into the story of Apocalypse.

Spoiler alert: This post will include spoilers from the season premiere of American Horror Story: Apocalypse. The first episode of the new season introduces Evie Gallant as something of a funhouse-mirror version of Joan Collins' most famous character, Dynasty's Alexis Colby. When she was first introduced, Evie even delivered one of Alexis' most iconic lines from Dynasty, complaining that her champagne was burned. After her grandson, a hairdresser played by Evan Peters whom we know only as Mr. Gallant right now, rushes in to save her from the nuclear apocalypse, Evie wonders aloud if she should phone Donald Trump to ask if this is fake news or not. She is obviously very well-connected.

Upon arrival at Outpost Three, the exclusive underground bunker reserved for wealthy socialites like Coco St. Pierre Vanderbilt (Leslie Grossman) and genetically pre-selected inhabitants like Timothy and Emily (Kyle Allen and Ash Santos), Evie Gallant easily finds herself becoming a Purple. As the outpost's leader Wilhemina Venable (Sarah Paulson) explains, Purples are the inhabitants who are treated like quasi-royalty in the bunker whereas Grays are inhabitants meant to serve them. Coco is quick to defend Evie's Purple status by mentioning the awards shows she's been to and the celebrities she knows.

But the most jarring moment involving Evie Gallant comes towards the end of the premiere episode. When Mrs. Venable's right-hand woman and muscle Miriam Mead (Kathy Bates) kills another Purple named Stu, claiming that he was infected by radiation, and cooks his body into a stew, everyone at the dinner table is horrified except for Evie. While the rest of the table screams at the realization that they were about to eat human meat, Evie happily laps up her stew, clearly not minding the fact that it was once a person.

So, what can we expect from Evie Gallant for the rest of the season? Clearly, she will be one of the main sources of comic relief during the apocalypse, but that stew scene could have also been hinting at an even darker interpretation of her character as well. If the Outpost Three inhabitants continue to kill one another for food as their weird nutrition cubes start to deplete, then Evie will definitely have no problem chowing down on her fellow people. Perhaps she will even start to crave human flesh, since she clearly enjoyed that stew much more than the bland food cubes she was being fed beforehand.

More like this
10 Quotes From Netflix's 'Enola Holmes' That Are So Freaking Relevant
By Rachel Varina
What Happened To The Waterfords In 'The Handmaid's Tale' Season 3? A Lot, TBH
By Ani Bundel
Who Plays Mal In 'Shadow And Bone'? You May Have Seen Archie Renaux Before
By Abby Monteil
Stay up to date