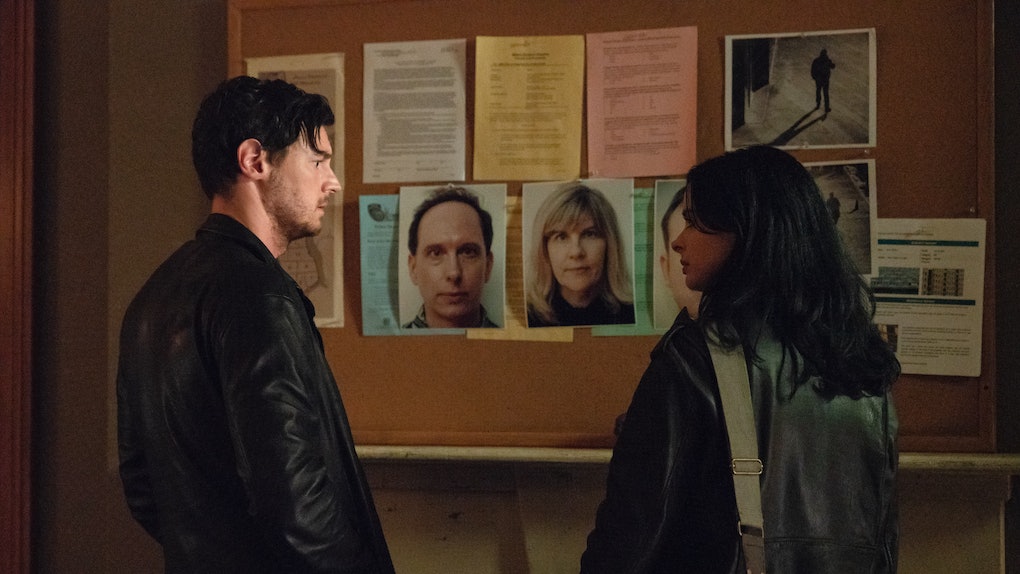 Who Is Erik On 'Jessica Jones' Season 3? Jessica's New Boyfriend Is Kind Of Super

Jessica Jones has been lucky in love. It's not her fault, her family died in a car crash, she spent her teen years dealing with grief and newfound powers a the same time. Then she wound up dating Kilgrave, which is enough to make one want to be single the rest of their lives. But Jessica Jones Season 2 ended on a hopeful note, as Jessica and Oscar from downstairs seemed to have a good thing going. But now there's a new guy in her life. Who is Erik on Jessica Jones Season 3? Warning: Spoilers for Jessica Jones Season 3 follow.

When Season 3 begins, Jessica and Oscar's son Vido are hanging out in her office. But Jessica declines coming over for dinner, suggesting that maybe her relationship with his dad is no longer happening. That only becomes more obvious as Jessica heads towards the local dive, and once again starts drinking away her life, and eying the new dude at the bar, who she eventually decides to take home.

Episode 2 confirms Oscar and Jessica have broken up, but amicably since Vido is important to both of them. But it's unclear if Erik will be a keeper at all. Despite his burger-based seduction and his nihilistic outlook that matches Jessica's, he's also brought someone to the door of Alias Investigations who thinks stabbing a girl in the spleen is a fun hobby. How dangerous is Erik?

Turns out Erik isn't a hero of any sort. He's a guy with a gambling addiction, who owes his bookies a lot of money. His way of raising funds isn't precisely orthodox either. He's a blackmailer. But how he picks his victims is different than most. Turns out he's a powered person too, with an ability to pick out evildoers out of a crowd.

Apparently, people who are doing evil deeds give Erik a headache, like a literal migraine. Whenever he's out and about, if he walks past someone who makes his temples throb, he follows them, finds where they live. Then he sends them a blackmail letter suggesting he knows what they've done, even though he never does, and awaits payment.

Most of the time, it works. Every so often, something like a random spleen stabbing happens instead. Such are the dangers of life.

Erik didn't set out to become a blackmailer or a bad guy. In fact, he's got a pretty good heart, including worrying about his sister, who is currently off her meds and on the streets. He even once thought about using his powers to take down those who gave him a headache. But it was all too complicated, and a lot of times, being a hero was a thankless job. No wonder he and Jessica see eye-to-eye on their life's philosophy.

But maybe one day, when this is all over, Erik will come back to the city. Perhaps then he and Jessica can get together again for burgers.