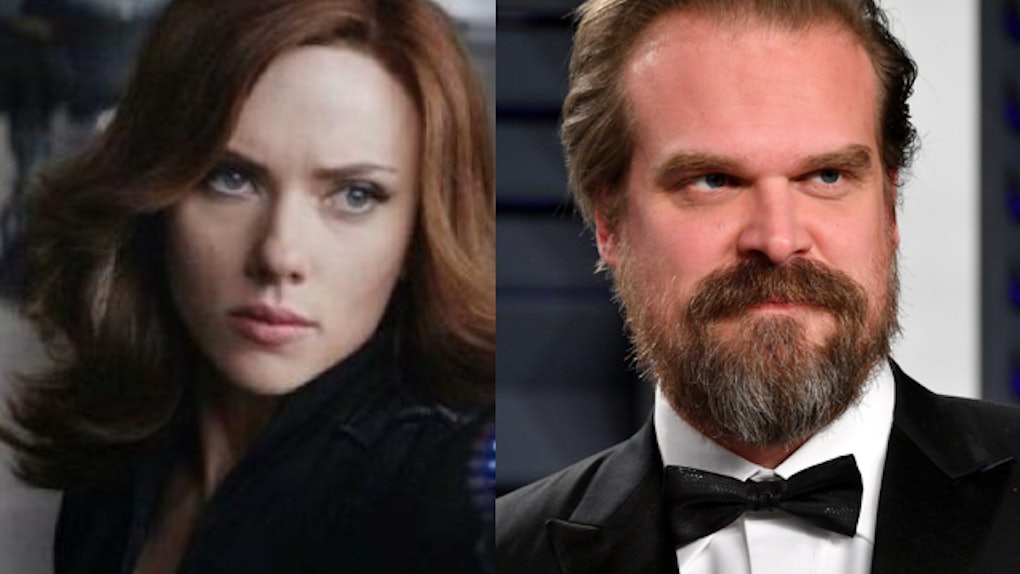 The Black Widow origin story has been a long time coming, and fans finally know some more of the folks who will be helping to tell that story. On April 3, The Hollywood Reporter announced that Stranger Things star David Harbour will be joining the cast of Black Widow. But, who is David Harbour's Black Widow character? Fans still have a bunch of questions about the new Marvel flick.

Marvel is known for being pretty secretive about plot and character details for upcoming titles in their vast universe, and the way they're handling Black Widow is par for the course. Fans don't know a ton about the story of the Black Widow movie, other than the fact that it'll serve as an origin story for the Avenger. According to The Hollywood Reporter:

[Black Widow] will be an internationally set story centering on Natasha Romanoff, a spy and assassin who grew up being trained by the KGB before breaking from its grasp and becoming an agent of SHIELD and Avenger.

There's no word yet on the character that Harbour will be playing in the new movie, and fans might not find out details until the movie's release gets closer. But folks on Twitter are already voicing their excitement.

This isn't the first time Harbour has entered a comic book world. He played D.A. Frank Scanlon in 2011's The Green Hornet and government official Dexter Tolliver in 2017's Suicide Squad. Most recently, he is starring as the the titular role in Hellboy, which is set to open on April 12. But, Black Widow marks the first time Harbour is venturing in the Marvel Cinematic Universe. And of course, he'll be returning to Hawkins, Indiana this summer for Season 3 of Stranger Things.

Harbour isn't the only star who was just announced as part of the Black Widow cast. Rachel Weisz is also in talks to play a role in the film, fresh off of her Oscar award-nominated performance in last year's The Favourite. Weisz is no stranger to action movies. She gained a lot of notoriety for her performance in 1999's The Mummy. Now, 20 years later, it'll be exciting how she steps back into those butt-kicking shoes.

According to The Hollywood Reporter, Black Widow is set to begin production in June, so more news about the movie will likely break in the coming months. This movie has been in the works for a long time. According to Vanity Fair, Marvel first announced that they were developing a Black Widow movie, and now five years later they're finally delivering on that promise. There's no word yet on when the movie will be released, though. Black Widow is part of Marvel's Phase Four of movies, an none of the release dates for those movies have been announced yet. So, if waiting for Black Widow for possibly years feels too hard, you can see Scarlett Johansson as Black Widow much sooner in the upcoming Avengers movie. Avengers: Endgame hits theaters on April 26.

More like this
17 Tweets About Simu Liu In The 'Shang-Chi' Teaser, From Proud 'Kim's Convenience' Fans
By Dylan Kickham
Kathryn Hahn Hopes To Explore Agatha's Backstory In Future Marvel Projects — EXCLUSIVE
By Dylan Kickham
10 Quotes From Netflix's 'Enola Holmes' That Are So Freaking Relevant
By Rachel Varina
Stay up to date