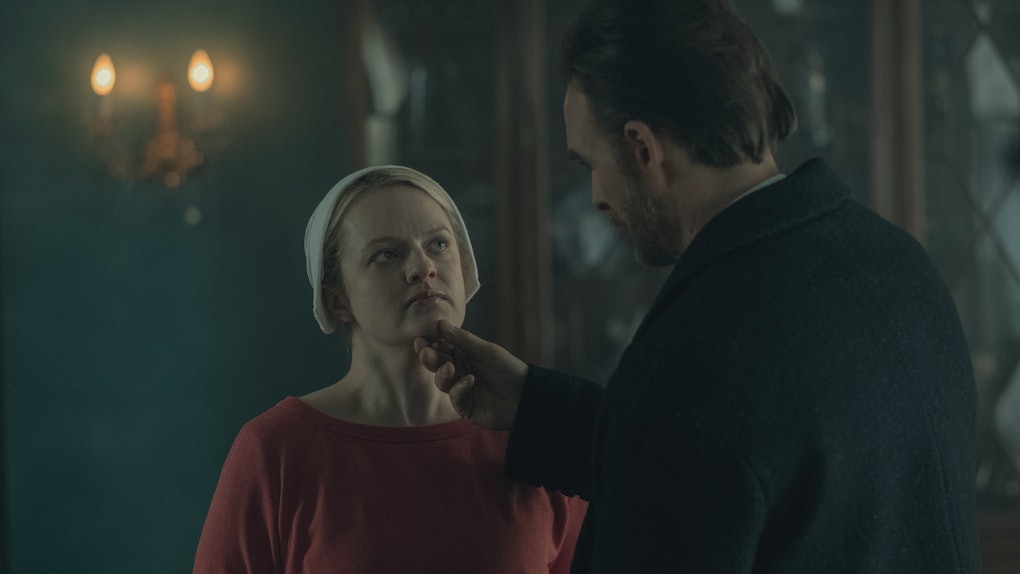 Who Is Commander Cushing? 'The Handmaid's Tale' Character May Be In Serious Trouble

Last week's episode of The Handmaid's Tale Season 2 sent shock waves through Gilead when Ofglen #2 finally took control of her life and sacrificed herself to destroy the new Red Center. The episode ended on a cliffhanger, not revealing who survived the attack and who didn't. This week's episode opened with the reveal Commander Waterford was still alive, but his family had a whole new set of problems to deal with, including Commander Cushing. So, who is Commander Cushing? And how big a problem is he for the Waterford family? Warning: Spoilers for The Handmaid's Tale Season 2 follow.

The first very bad piece of news is Commander Price has "gone to God." That's bad for Nick: Price was not only a commander, he was also head of the Eyes, and someone Nick reported to directly. Nick had put a plan in motion which would take down Commander Waterford and get Offred freed. Now, he's back to square one.

But Price's departure from life in Gilead and the series promoted one of the other men viewers met in Episode 4, from the shark-infested waters of Waterford's day of shooting, into the role of "Head of Security." Fans may recall Commander Cushing as the jerk who makes fun of the one-handed Commander Putnam (Ofwarren's commander from Season 1).

Turns out that's just the tip of the iceberg.

When Cushing takes over as head of security, he puts the whole of Gilead under lockdown. It's a display of force and fear. No less than 29 commanders were killed in Ofglen's explosion and 31 handmaids. So many, they're actually pulling ex-handmaids out of the Colonies and sending them back.

Ofglen's "host family," the Deeds, have all been executed, because their handmaid turned out to be a terrorist. There are marthas and chauffeurs hanging by the score from garages and trees all along the roads around the Waterford's homes. Even the Waterford's neighbors, the Websters, lose their martha. She is shot in the street while fumbling for her ID.

Cushing is only getting started. Commander Waterford, as viewers have seen in earlier episodes, isn't entirely popular with his set of coworkers and friends. He couldn't even get Price to honor his requests and everyone, including Cushing, seemed highly doubtful of his ability to open the Red Center on time.

Cushing smells blood in the water. Waterford outranks him, and if he can bring the man down while he's flat on his back in the hospital, that's even better. He sees Offred as a perfect target. Everyone knows she ran away, even though they politely say she was "kidnapped." If he can get her to name Waterford as the one who helped her, he's got an airtight case.

But Offred refuses to take the bait. Perhaps Nick and Rita actually being the ones who helped her made accusing the commander too close to home. Perhaps she figured if Commander Waterford went down, so did the entire family. She definitely doesn't trust Cushing to protect her baby. But Serena Joy, on the other hand, will have the baby's interests at heart.

Serena does what she has to. Nick has helped the commander put together warrants to the Consular of Divine Law and submit them. And while Cushing and his wife were once her friends, but now she's needs to protect her own. She forges Waterford's signature, and Nick delivers them to the right people. Putnam looks just a little too pleased to be the one showing up in the Eye's van to take Cushing into custody on "overwhelming evidence" of his traitorous behavior.

Is this the last the Waterfords will see of Cushing? Or will he return later this season to bedevil them further? For now at least, Offred and her baby are safe.