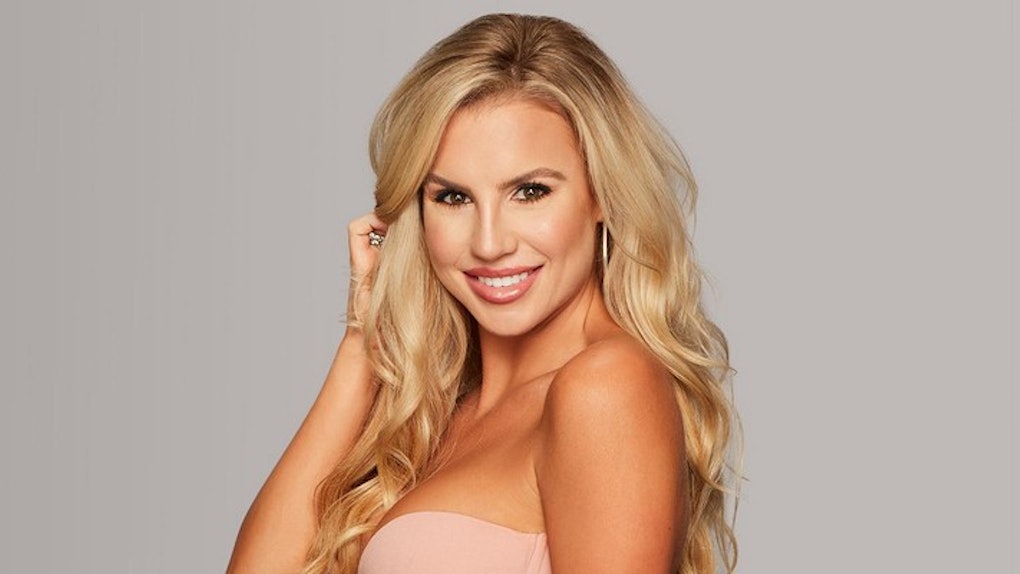 Who Is Catherine? Colton's 'Bachelor' Contestant Brought Her Dog Lucy To The Mansion

Colton Underwood's journey as The Bachelor won't officially begin until Jan. 7, 2019, when Season 23 of the reality dating show premieres. But in the meantime, the contestants are finally here, you guys! And, man, did the ladies vying for Underwood's heart make an impression when they were announced during the Facebook livestream on Dec. 6. There's an animal lover, a model, and someone who's credited as a "sloth" — nice work there, editors! But who is Catherine? The 26-year-old DJ brought her dog to the mansion! And TBH, I think she might just be my new hero.

Although, judging by her official Bachelorette Biography on the ABC website, Catherine is one of those people who refers to her dog as her daughter, and that's a total pet peeve (I swear that pun was not intentional) of mine so I may have to reconsider.

By day, Catherine is a successful commercial real estate agent. By night, Catherine is DJ Agro—an up and coming hip-hop DJ making a name for herself on the Ft. Lauderdale club scene. Along with her dog daughter Lucy, Catherine is hoping to spin her way into Colton's heart.

Um, is Catherine actually Wonder Woman? Because all of this by day/by night business and talk about spinning has got me picturing one thing and one thing only:

Anyway, back to the Facebook livestream, where we're treated to Chris Harrison introducing all the contestants while reading off a bunch of papers in his hand.

He then adds that Catherine brings a plus-one with her on night one — yup, that would be her dog/daughter Lucy — and that she isn't afraid to speak her mind and get time with Colton.

"You know how people kind of break in?" he asks. "It's like, 'Can I borrow you for a moment?' 'Can I break in?' "Can I cut in?' Well, I think Catherine may have set a record on break-ins on night one. I don't know if there's any stats kept on The Bachelor. I'm sure someone out there in Bachelor Nation keeps these stats. But keep track of it, I think Catherine may actually set a record."

Makes sense, considering she's a DJ. And yes, ladies and gentlemen, I'll be here all night.

Harrison then throws up a picture of Catherine's dog Lucy. I screenshotted it for you because she's pretty damn cute.

"In dog years, Lucy is 70," Harrison explains. "Which I think makes her 10. Also, from Ft. Lauderdale, Florida. I don't know what her profession is. But anyway, she'll be there on night one."

We already know how much Colton loves dogs, so I don't know about you guys, but my money is totally on Lucy to score the first impression rose.

You know, as long as Sniper approves.