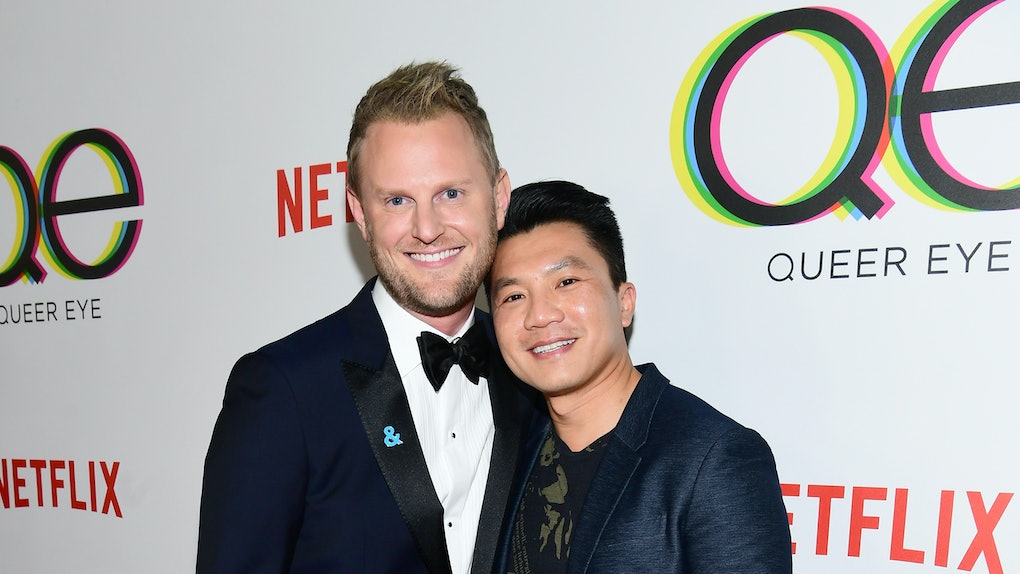 Who Is Bobby Berk's From ‘Queer Eye’s Husband, Dewey? This Is What We Know

Alright, Queer Eye fans, this one's for you. PS, if you haven't watched Netflix's reboot of the old, feel-good reality show yet, this is just a friendly reminder to take the day off work right now, run home, and relish in every beautiful episode.

Queer Eye has brought everlasting love to many of its participants, but what about the Fab Five? What's going on with their love lives? For example, who is Bobby Berk from Queer Eye's husband? We know the interior design guru is married, but we hardly know anything about his man... until now!

We first found out that Berk is married in the first season's Pilot episode, when everyone's all-time favorite guest, Tom Jackson, asked him about marriage.

“I’ve been married for five years,” responded Berk. The husband he was referring to is named Dewey Do, and he keeps an extremely low profile. Most of the admittedly few things we know about him are through Berk. A few weeks ago, Berk shared this on Facebook as part of his Pride campaign in partnership with Lyft:

Six years ago, my husband and I said "I do" and were actually married by a very close friend of ours who was ordained. We got married as soon as it was legal to get married and it was important to us to show the world our pride through our expression of love. So, when @lyft approached me with the idea of marrying couples on their float during New York Pride, I couldn't think of a better way to give back to the community than to help other couples express their love in the same way! Inclusion and acceptance is what #pride is all about and those are ideals @lyft has always promoted — I am proud to have been able to be a part of these couples’ special day and to partner with such a great company!

So, based on that post, we have our first bit of information: The couple was married by a friend six years ago.

Next, we turn to Berk's Instagram for more. While Do's profile is set to private, his hubby often tags him in posts of the two of them traveling the world together.

Here they are in Costa Rica:

Here they are hitting the slopes at Bear Mountain:

Here they are snacking on some watermelons at the Grand Canyon:

Here they are at Lake Powell:

When you're stalking Berk's Instagram, you also notice that the couple resides in Los Angeles together. He captions one adorable post of them sitting on the couch at their home, "Working in LA this week means I get to spend the weekend at home with this one #baeday." PopSugar reports that the couple moved into their current Los Angeles home just a short three months before Bobby was cast in Queer Eye. Before the move, People reports the couple lived in New York City.

OK, so they were married by a friend six years ago, they love to travel and they live in LA. What else do we know?

Back in 2010, Berk posted a tweet alluding to Do potentially being involved in the medical spa business. "Checking out condos in Saigon," he tweeted at the time. "Building is great! Also has a mall I can open a Bobby Berk Home in and that Dewey can open his medical spa." But on July 17, 2018, in an article dedicated to Berk and Do's stunning L.A. home, People actually confirmed that Do is a a maxillofacial surgeon.

Furthermore, PopSugar reports that despite the fact that they got married six years ago, the couple has actually been together a whopping 14 years. Yeah, so that's six years of marriage after eight whole years of dating!

Other than this, there's little else known about Do, and based on the fact that his Instagram page is private and that he hasn't given any press interviews, I'm going to venture to guess that he'd like to keep it that way.

Cheers to an adorable couple, and here's to all of us respecting Do's privacy!