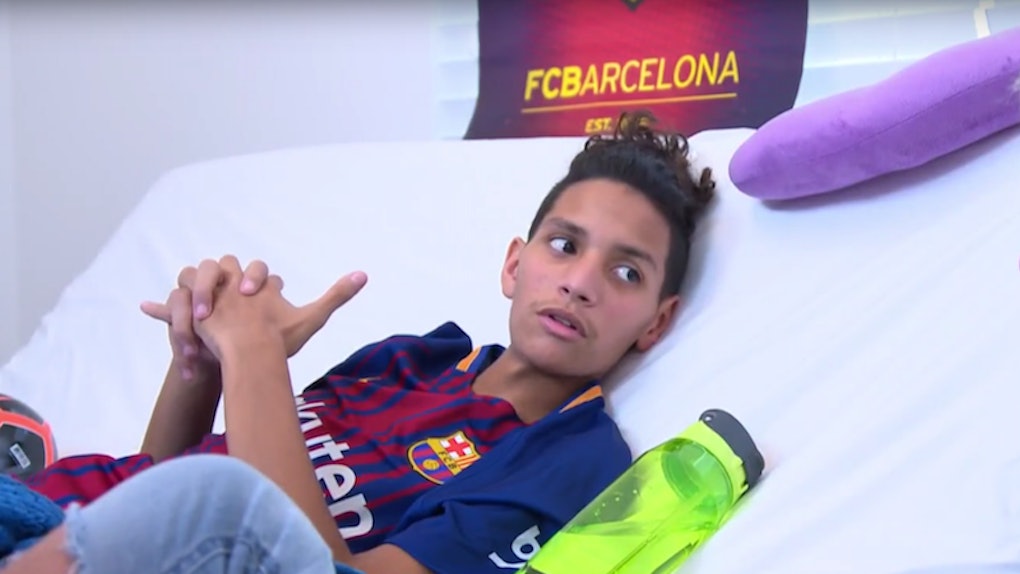 Who Is Anthony Borges? This Parkland Teen Survivor Was Released From The Hospital

Weeks after his classmates organized the March For Our Lives and nearly two months since the Feb. 14 shooting at Marjory Stoneman Douglas High School in Parkland, Florida, a 15-year-old student who is being hailed a "hero" is finally home. Several prominent Parkland students have become the mouthpiece for a movement, but this survivor is speaking out for the first time. Who is Anthony Borges? This Parkland teen was released from the hospital after being shot five times.

Borges, the most gravely injured of the Parkland survivors, appeared on NBC's The Today Show April 4. Having been shot five times, a third of his lung had to be removed, with another bullet coming close to his liver, and three others hitting his legs, per NBC. Borges reportedly barricaded the door to his classroom shut, and continued to do so after being shot. He is credited with saving more than a dozen lives as the result of his actions, according to CBS Miami.

"I think I was going to die," Borges said softly in an interview with NBC's Kerry Sanders on April 4, adding that he doesn't think of himself as a hero.

Borges' father, Robert, told 60 Minutes that his son called him during the Feb. 14 massacre. "He said, 'Dad, I got shot,'" Robert Borges said. "I said 'Just keep talking to me, don't leave me. Don't leave me.'"

The freshman underwent nine operations related to his injuries, reported the Miami Herald.

"He's a hero in my book," said Alex Arreaza, the family's attorney on The Today Show. "He's the real deal."

While Borges continues to recover, others in his family are taking the opportunity to speak out. Arreaza announced one week after the shooting that the Borges family plans to sue Broward County, Broward County Public Schools, and the Broward County Sheriff's Office over their handling of the shooting. Elite Daily reached out to each of those offices for comment, but did not hear back ahead of publication time.

Law enforcement and state employees are typically immune to lawsuits about failure to take action, per Reuters, because courts have set precedents that those organizations must make decisions "without fear of liability."

Mr. Borges was a victim of this rampage, having been shot five times, suffering life-threatening injuries and is currently hospitalized at Broward General Medical Center. Due to his condition, Mr. Borges is currently unable to walk and has a great deal of difficulty performing rudimentary tasks for himself, requiring assistance constantly. The failure of Broward County Public Schools, and of the Principal and School Resource Officer to adequately protect students, and in particular our client, from life-threatening harm were unreasonable, callous and negligent.

As for Borges' act of heroism, people are starting to take notice. Futbol Club Barcelona, aka FC Barcelona or Barça, a Spanish soccer club, sent Borges an autographed jersey to honor his bravery. Borges was born in Venezuela and reportedly hopes to one day play soccer again.

Borges still has a long process of recovery ahead of him, according to The Washington Post. Arreaza told The Post that Borges cannot speak for long periods of time without becoming winded and that the teen will need physical therapy and possible treatment for post-traumatic stress disorder. But, he said, the teen is “happy he’s home.”

Doctors reportedly told his family that their walk-up apartment wouldn't be doable for Borges' recovery needs, and they recently moved into a first-floor unit, per the Herald. A GoFundMe page to help the family with the costs of his recovery has raised more than $802,000 of its $1 million goal.

Parkland students returned to school this week from spring break, many of whom were irritated by the district's mandate for clear plastic backpacks, though it remains unclear whether Borges will return to MSD.