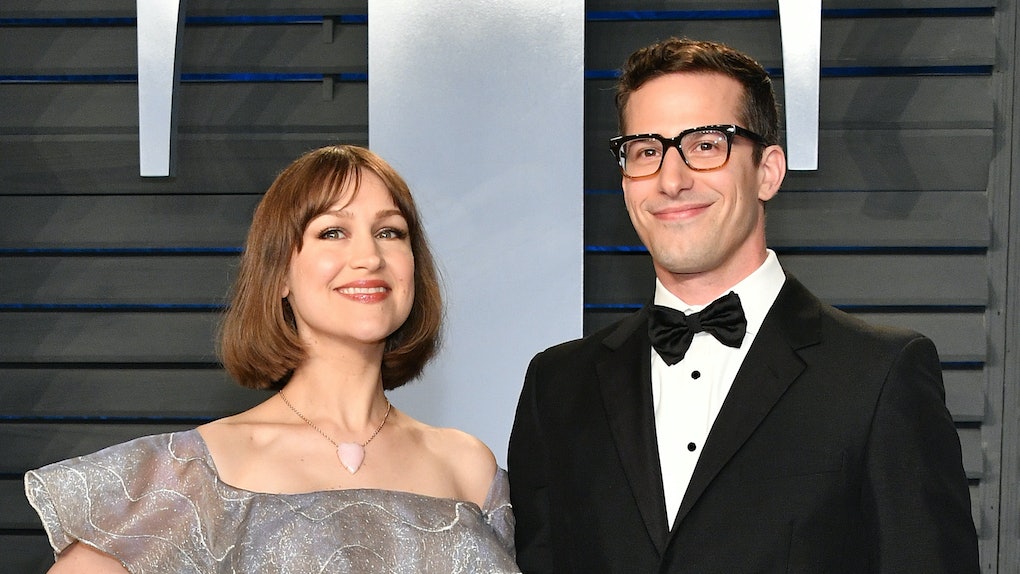 Who Is Andy Samberg's Wife? Joanna Newsom Gives Him A Run For His Money Musically

The 2019 Golden Globe Awards are quickly approaching, and I, for one, am ecstatic. On Jan. 6, we'll get to witness a star-studded night filled with your favorite actors and actresses, but there's also one other part of the night I'm equally amped for, and that's who will be hosting the awards. That's right, Andy Samberg and Sandra Oh will co-host the event, which means we should expect hours of humor and wit from the pair. And, while the nominees will surely have dates to cheer them on, what about the hosts themselves? In case you didn't know, Andy Samberg is married — so who is Andy Samberg's wife? Her name is Joanna Newsom, and she's just as talented as her comedian husband.

While Andy Samberg sings hilarious songs like "I'm On A Boat" and "Diaper Money" with his comedy troupe Lonely Island, his wife Joanna Newsom is a singer, songwriter, and — get this — professional harpist. Her music is whimsical and unique, and the addition of the harp in Newsom's songs gives off an otherworldly vibe. (Can you tell I've been a longtime fan of her?)

So, how did Joanna Newsom and Andy Samberg meet? Apparently, the Brooklyn Nine-Nine actor was crushing on Newsom for quite some time before they got together. According to Us Weekly, a friend of Samberg told the publication back in 2012 that "he liked her music and would go to her shows," adding, "He had the biggest crush on her."

And honestly, it's hard not to have a crush on her. Just listen to her sing "Sapokanikan," a track off of her 2015 album, Divers:

Is her voice not absolutely mind-blowing?

So, back to their love story. Apparently, the two had a mutual friend, Saturday Night Live alum Fred Armisen, who was able to introduce Samberg to Newsom in 2008 at one of Newsom's concerts, and sparks flew immediately. And ironically enough, Newsom herself was just as big a fan of Samberg as he was a fan of hers. In her interview with Rolling Stone back in 2010, she tells the magazine that she was a fan of Samberg's comedy "before I ever met him," adding, "I remember being on tour, watching his old, pre-SNL stuff with my band, forwarding it to friends."

I'm sorry, but the fact that they were both such fans of each other's work before even meeting is just too precious.

Flash forward to present day. The two are married (after tying the knot in Big Sur back in 2013) and have a daughter who they keep out of the limelight, since both Samberg and Newsom are fiercely private about their personal lives.

One thing the couple does have in common is their passion for music. While their lyrics and songs are basically at complete opposite ends of the spectrum, they both appreciate music in the utmost capacity — so much so that they only listen to music in their home in the highest quality way: absolutely nothing digital.

"Andy has an iPad, or iPod, whatever it’s called, but we don’t have a sound system that’s not analog — we have a beautiful turntable, nice speakers, a tube amp," Newsom told Rolling Stone.

As someone who loves music, I absolutely love this rule.

And even though Newsom's music is, in a way, very high-brow (I mean, the woman plays the harp, you guys), she still cheers on her husband's musical talent, no matter how silly or playful the music he creates might be. "She respects what he does with his songs," an insider told Us Weekly. "She's so proud of everything that he has accomplished."

Raise your hand if you think Joanna Newsom and Andy Samberg should be 2019's "it" couple:

Alright, then. That settles it.

More like this
BTS' Inkbox Temporary Tattoos Collection Is "Dynamite"-Inspired, So Take My Money
By Marisa Casciano
These Tweets About BTS' 'Bang Bang Con 2021' Sum Up The Epic Performance
By Cianna Garrison
With 'Like Water,' Wendy Found Her Biggest Cheerleaders In Her Red Velvet Bandmates
By Michele Mendez
Stay up to date