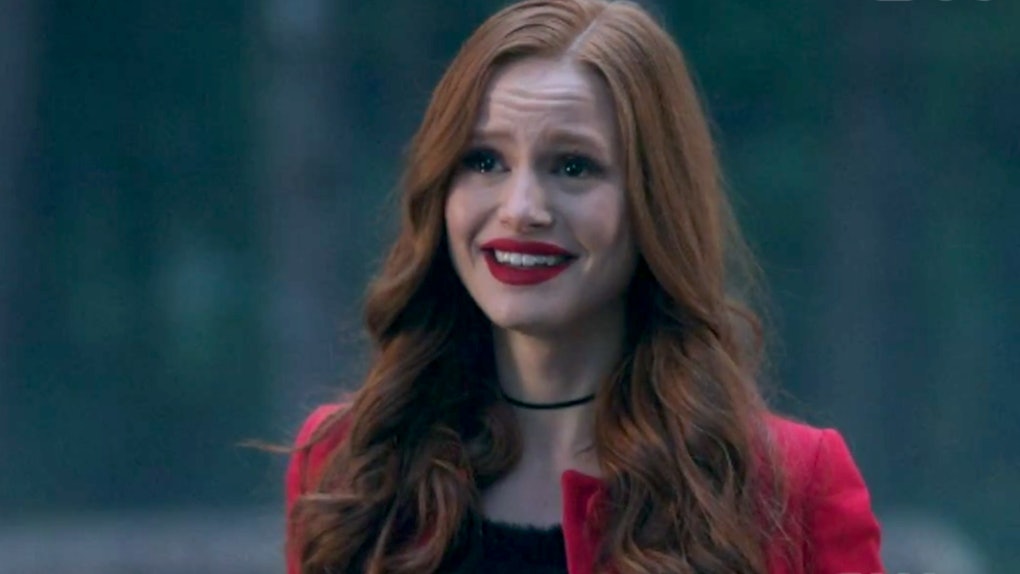 Who Destroyed The Statue On 'Riverdale'? Cheryl May Be The Biggest Suspect

The town of Riverdale is more at odds than ever at the end of Wednesday night's new episode, and that is made evident by the vandalized statue of the town's founder. In an episode that revolved around the growing tension between the Southside Serpents and the North side, the final scene reveals what might be the first shot in a possible civil war between Riverdale's two factions, but the person who actually destroyed the statue on Riverdale may not be who everyone thinks it is. Let's dissect Riverdale's newest mystery. Spoiler alert: Don't read on if you haven't watched Riverdale Season 2 Episode 11, "The Wrestler," yet.

The new episode had three storylines. The first two were more character-specific: Betty and Chic bonded over their mysterious "inner darkness," and Archie attempted to get closer to Hiram Lodge as a part of his random FBI investigation thing. But the overarching storyline was all about the ever-growing tension between the Southside Serpents and the North side. As the Lodges prepare a bigger-than-usual festival to celebrate Pickens Day — a town holiday dedicated to Riverdale's founder Augustus Pickens — Jughead does some signature Jughead-sleuthing and discovers that Pickens was actually responsible for a terrible massacre that had been hidden from the town's history. Toni Topaz's grandfather tells Jughead that Pickens slaughtered hundreds of the land's Native inhabitants in order to found Riverdale. The surviving Natives formed the Southside Serpents in response, as a way to stick together.

Obviously, this fires up the easily-fire-uppable Jughead, and he and Toni Topaz plan a protest for the Pickens Day celebration. When the Serpents show up at the festival with signs and duct tape over their mouths, Toni delivers an impassioned speech explaining what Pickens did to her ancestors. However, Hiram Lodge is quick to grab a mic and uses his way with words to dispel the protest, which angers Jughead even more. All of this leads up to the last shot of the episode: Mayor McCoy, Sheriff Keller, and Hiram and Hermione Lodge stare at the statue of Augustus Pickens, only his head has been chopped off and red paint spills from the top like blood. Given the Serpents' protest earlier that day, Hiram is quick to assign blame:

I believe we all know who the prime suspects are. You tell me: isn't this something the Serpents would do?

The Serpents certainly do look like the prime suspects, especially after how angry Jughead got about Pickens' statue being proudly displayed in the middle of town once he learned the truth. But that would just be too obvious, wouldn't it? The episode actually dropped some clues that could implicate another suspect: Cheryl Blossom.

At the beginning of the episode, Cheryl explains that her ancestor was the one who actually hired Augustus Pickens to secure the land in what is now Riverdale so that he could begin the Blossoms' maple syrup empire. Once Cheryl learns the truth about Pickens' massacre, she reveals to her mother that she is no longer proud of her ancestor, even coming to the point of tears. Cheryl really does have a heart, you guys! True to form, Mrs. Blossom is as cold and unfeeling as ever, but the truth about Pickens really does seem to affect Cheryl... so much so that she could have been the one to vandalize the founder's statue. I mean, we already know that Cheryl is prone to dramatic and dangerous outbursts — ahem, arson, ahem — so it's not much of a stretch to think she sawed off a statue's head.

Although she most likely wasn't motivated by the town feud if she did desecrate the Pickens statue, Cheryl's action will most definitely have huge ramifications in the ongoing war between the Southside and North side, with Jughead's narration promising that it will ramp things up to radical levels. Oh, Cheryl... what have you done?