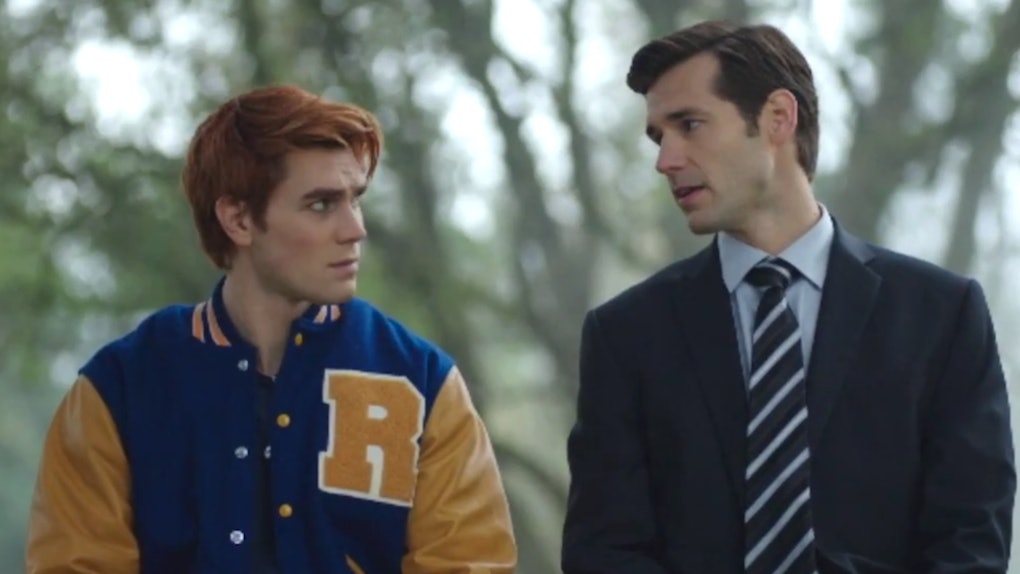 Ummm, guys... what is even happening on Riverdale right now? The show has always been crazy, but it came back from the winter hiatus with one of its wildest episodes yet. Greasers waged war against preps in the high school, secret Cooper siblings were found in sex motels, and... Archie is working with the FBI now? Yeah... that FBI agent popping up out of nowhere definitely felt really strange, but fans have a theory about special agent Adams that would explain this weird new storyline. What if the FBI agent on Riverdale actually wasn't real, only existing in Archie's mind? Yep, classic Fight Club scenario, but it could prove to be true — let's break it down.

Spoiler alert: Obviously, I'm going to be talking about the new episode of Riverdale, Season 2 Episode 10 "The Blackboard Jungle," so don't read on if you haven't seen it yet. OK so, in the midseason premiere, some random guy in a suit approaches Archie and introduces himself as Special Agent Adams of the FBI. He tells Archie that he wants his help in investigating Hiram Lodge since Archie has an in with the family as Veronica's boyfriend. Although Archie relents at first, he finally does agree to work with Adams after he finds out that Veronica might be hiding things from him. So we leave off with Archie and Agent Adams laying out their plans to take down the Lodge family... but something just doesn't feel right about Agent Adams.

Riverdale fans were quick to pick up on all the weirdness surrounding FBI Agent Adams' sudden appearance, and most are now theorizing that this guy may not actually be an FBI agent... or even further, he may not even be real. The case for Adams not being a real FBI agent boils down to a few things:

So it seems like someone might be impersonating an FBI agent on Riverdale, but a few fans are taking this theory even further. Let's go over some added reasons that people are saying Agent Adams might actually be a hallucination that Archie is having:

Interestingly enough, this mysterious FBI agent appears in the first episode where Betty's long-lost brother Chic is also introduced. In the Archie comics, Chic Cooper is a government secret agent, but it doesn't look like screenwriters are translating that element of his character into the series... unless Chic and the FBI agent are connected somehow? It just feels like too much of a coincidence that Chic and an FBI agent would both pop up in the same episode.

We will definitely have to keep our eyes on this FBI agent to see if he ever talks to anyone besides Archie, because if he doesn't, then I'm going to be really worried about Archie's mental health.