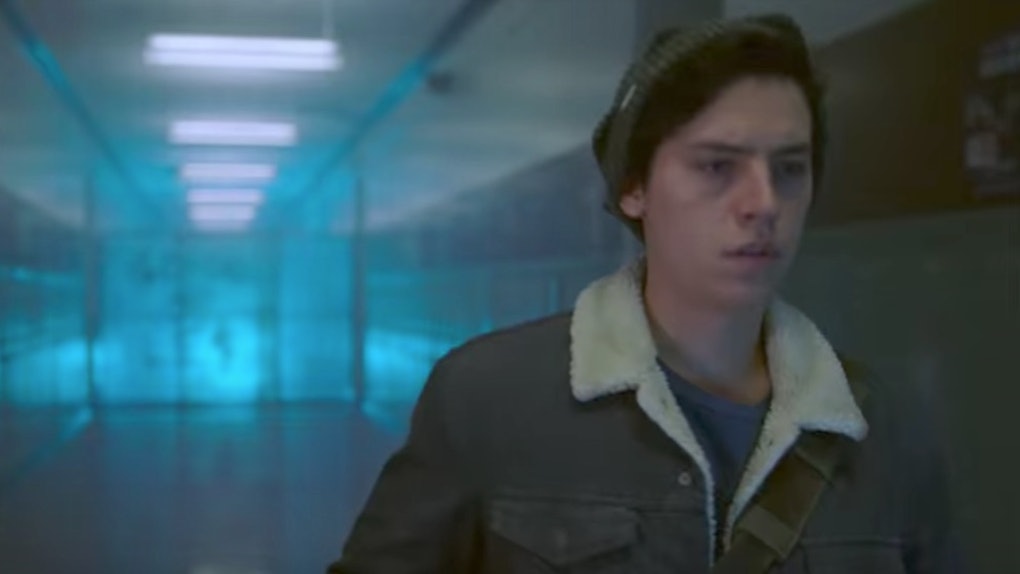 Who Are The Ghoulies On 'Riverdale'? The Gang Poses A New Threat

"Welcome to Hell." Thanks, teach. Apparently even the adults working at Southside High know what a dangerous place it can be. And so begins Jughead's treacherous journey through the halls of the institution in the third episode of Riverdale's second season. And let's just say the transition isn't without its learning curves and growing pains. Literally, pains. With everything to worry about around town — that whole hooded killer on the loose thing, for instance — there's a fresh group of possible baddies to consider and they've got their eyes and hands on Jughead already. Who are the Ghoulies on Riverdale? The gang is raising serious eyebrows... and our anxiety levels.

Jughead's a loner. A rebel. A "weirdo." He just wants to read his book, for crying out loud. But if you're at Southside High and you're FP Jones' kid, it might be wise to roll with some protection. Enter Toni Topaz, photographer and Serpent extraordinaire. She's been enlisted to give Jughead a tour of the school, which kind of reminds us of when Janice shows Cady around the cafeteria in Mean Girls, except it's a lot scarier. Instead of lunch tables with cliques like JV Jocks and Art Freaks, there are actual rival gangs to be worried about. Case in point: The Ghoulies.

Drug dealers, street racers, and possible cannibals? Did we hear that correctly, Toni? Poor Jughead is immediately at risk on his first day of school. Sweet Pea (cutest tough name ever) the Serpent even warns him. Plus, there's the rampant Jingle Jangle problem, or "JJ," as Toni refers to the "gutter drug." So, now that Jughead's at Southside, what is he to do? Well, not only is he schooling his classmates on Ray Bradbury, he's putting his investigative journalism skills to good use right off the bat by reviving the defunct school newspaper. Something tells us his getting all up in the business of what's happening on the surface and in the underbelly of this school is a precarious role to play, because danger is lurking around every corner. Seriously. He already got hurt. No, Jug, no!

Aside from the physical danger Jughead Jones is in, there's another problem. He's already lying to Betty and it's been barely 24 hours. After getting jumped, he goes and tells her that his pesky motorcycle is to blame. Tsk. Tsk. When your pal of like five minutes, Toni Topaz knows your truth and your girlfriend doesn't, things are already off to a rocky start. We know how important it is to be loyal to the Serpents — now, more than ever — but when stuff comes between the important bond that is Bughead in any way, it doesn't look good. As if we didn't already know this was going to happen.

We're guessing the Serpent rumbles with those rival Ghoulies isn't over. Funnily enough, The Groovie Goolies was the name for a short-lived early 1970s animated TV spinoff of Sabrina the Teenage Witch. As you probably know by now, Sabrina is part of the Archie Comics universe and her series was a spinoff of The Archie Show. The Groovie Goolies were a pack of cool monsters that also sang songs and lived at a boarding house. That's not exactly their role thus far on the modern day Riverdale incarnation, but perhaps the name is just a nod to their affiliation with the franchise. Will they be rockin' and rollin' on the Sabrina spinoff that's currently in the works in some other way? We'll have to wait and see.

For now, Jughead just has to watch his back. And while Archie is playing watchdog, Jug is being watched over in some way as he sits at the Serpent table. Is anyone safe in this crazy town?

More like this
In 'Riverdale' Season 5, Toni Topaz Is The Black Superwoman Without A Cape
By Erika Hardison
Who Did Emily Poison? 'The Handmaid's Tale' Season 2 Is Off To An Intense Start
By Ani Bundel
These Fake 'Riverdale' Brand Names Are Even Better Than The Real Thing
By Rachel Varina
Stay up to date