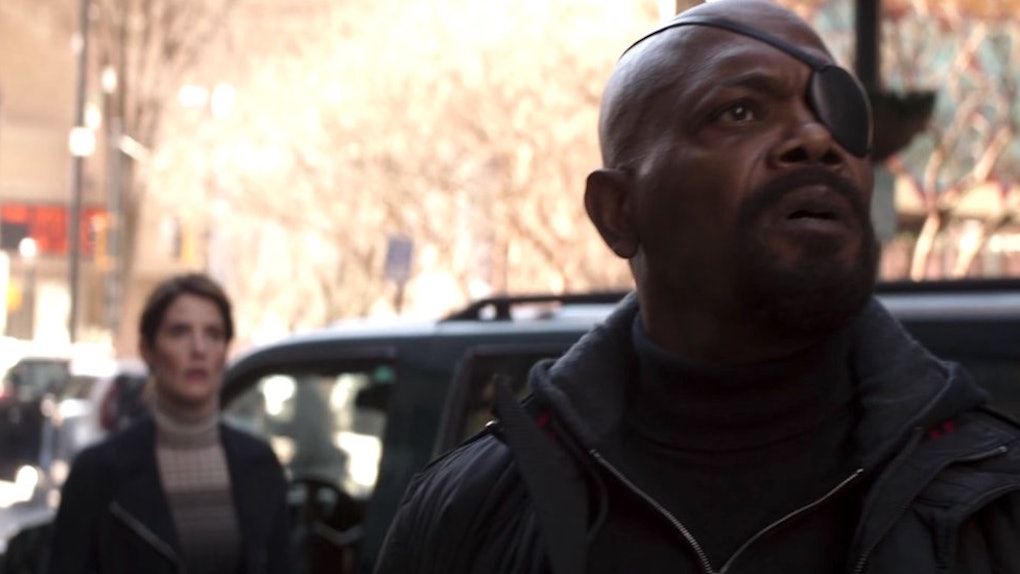 Where Was Nick Fury In 'Infinity War'? Marvel Is Releasing A 'Captain Marvel Prelude'

This past summer, Avengers: Infinity War brought all of the Marvel superheroes together, but one Marvel mainstay did not appear at all in the movie, and only showed up for a few seconds in a post-credits scene. But although Nicky Fury only briefly popped up, that final scene makes it clear that he will be crucial in connecting the upcoming Captain Marvel to Infinity War and Avengers 4. So where was Nick Fury during Infinity War? Thankfully, Marvel is releasing a new one-off comic that will reveal what Nick and Maria Hill were doing before falling victim to Thanos' snap in the Infinity War end credits, and it will also give fans a ton of new details about how Captain Marvel will fit into the Marvel Cinematic Universe.

Before Carol Danvers takes flight in 2019’s first Marvel Studios film, immerse yourself in this all-new adventure! Spinning out of the mysterious events of Avengers: Infinity War, Nick Fury and Maria Hill set off on life-or-death missions that lead directly to the appearance of Captain Marvel!

Although the upcoming comic is called Captain Marvel Prelude, it sounds like it will serve more as a connective tissue between Avengers: Infinity War and Avengers 4 than setting up Captain Marvel. Marvel has said that the book will "spin out of" the events of Infinity War, apparently focusing on Nick Fury and Maria Hill's efforts to contact Captain Marvel so that she can help the rest of the Avengers take down Thanos, a team-up that we know will happen in Avengers 4. But the actual Captain Marvel standalone movie is going to be set in the '90s, serving as an origin story for the hero.

More like this
Will Sharon Carter Be The Villain In 'Captain America 4'? This Theory Makes Sense
By Ani Bundel
Who Will Play The Fantastic Four For Marvel? Twitter Has So Many Ideas
By Dylan Kickham
TikTok's #NotTheMainCharacter Trend Shows The Supporting Role You Connect With Most
By Marisa Casciano
Stay up to date