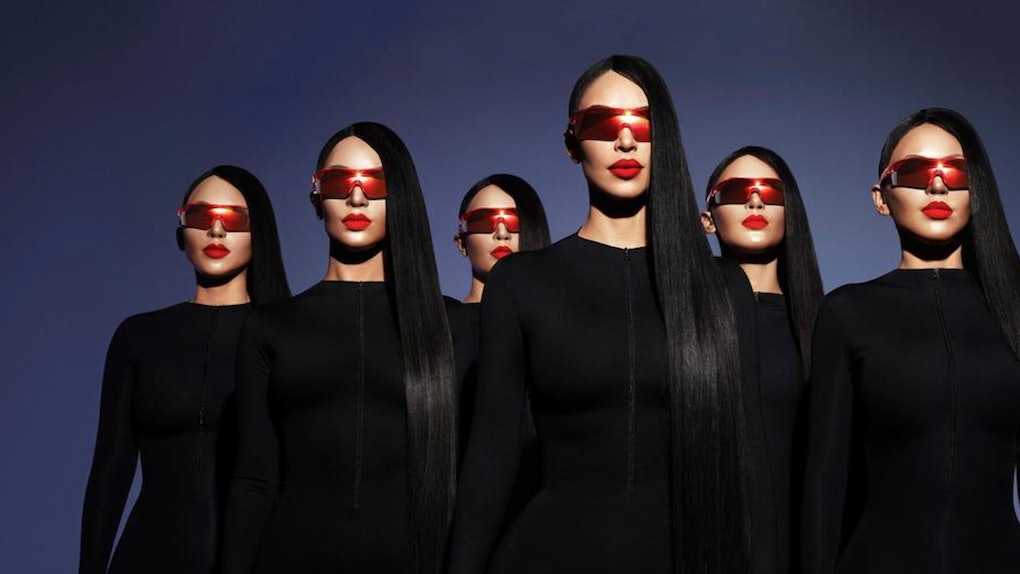 If you're in the market for sunglasses that will make you feel like a Los Angeles it-girl but won't break the bank, then a certain celebrity collaboration is exactly what you should shop. Where to get the Kim Kardashian x Carolina Lemke sunglasses, you ask? The collection is officially available on the Berlin-based eyewear designer's website right now, meaning you can add to your summer accessories lineup ASAP. Trust me, it's a drop that you don't want to miss, especially if you stan the Kardashians' style.

The collaboration was announced three weeks ago via a very confusing and futuristic campaign that saw Kim and five of her clones modeling the lenses. All of the Kims wore the exact same monochromatic outfits, sported the same ultra sleek knee-long hair, and naturally looked fierce AF. (Would you expect anything less from the beauty maven?) "Coming soon. Follow my vision with @carolinalemkeberlin," the post was captioned but no other information was given. A quick Google search led me to Lemke's site, where I perused and drooled over a selection of legitimately chic glasses (many of which were priced at around $75), and I quickly became extremely excited about what the collaboration would have in store.

Today, the anticipation is over. The 25-piece collection (some styles come in multiple colors) boasts an array of shades that are similar to styles Kim, Kourtney, Khloe, Kylie, and Kendall have each been photographed in as of late, so no matter which sister's look you love most there'll be something you'll love. Each pair retails for $90, which is a steal, considering the celeb power behind the line, so avoid buying overpriced designer sunglasses and get two or three pairs of these instead. Shop some of the standout styles below but make sure to check out the collection in full.

Aviators, Kim K style. Rimmed with gold and featuring matching lenses, these are the definition of rich.

If your dad didn't own a pair of shades that looked like this when you were younger then you were definitely born in the 2000s. All things '90s are back and these are perfect for acing the decade's style.

Featuring geometric oversized lenses, these sunglasses will definitely attract some looks. Throw shade back in the chicest of ways.

These might protect your eyes from the sun but they'll give anyone who looks at them a dose of blinding brightness in turn.

Orpheus would definitely approve of these tiny oval shades, which are much like those Kendall wears on the regular. Find a floor-length leather trench coat and you've got your halloween costume handled.

These remind me of sport glasses people might wear while snowmobiling or motorbiking, just way cooler. The more protection, the better, right?

If statement lenses and rims aren't for you, consider these average-sized sunnies in a translucent color way. They're equally as stylish but not so in-your-face.