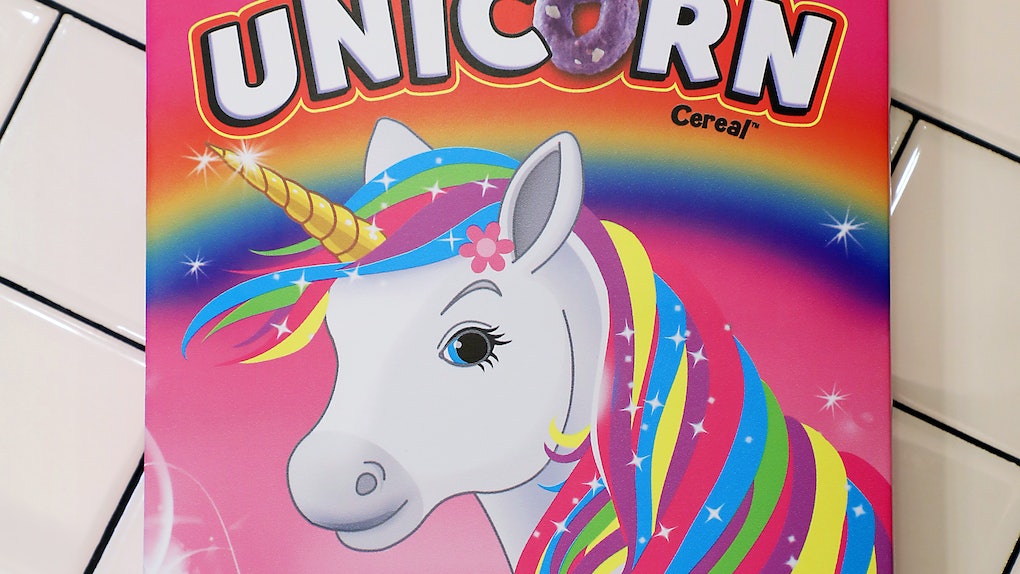 Mornings can be pretty difficult to withstand, and if you disagree with that statement, I think you might be a robot. Regardless, eating a bowl of magic in the morning would definitely make me a much happier camper, and if you haven't already checked out Kellogg's latest and greatest creation, which is known as Unicorn Cereal, you've definitely been missing out. So if you're currently hoping to snag a bowl of it before work tomorrow, here's where to buy Kellogg's Unicorn Cereal for an extra enchanting start to your day.

As you can probably tell, I am beyond enthused about this delightful innovation... and there's a chance you're thinking that there's a literal child behind this computer of mine. Well, I hate to break it to you, but I'm actually 23 years old; I'm just still wildly enchanted by the idea of unicorns. Seriously, what of it?

You can officially buy this majestic AF breakfast delicacy in stores nationwide as of March 5, 2018, according to a Kellogg's representative. So, if you haven't already downed a bowl of it every day since then, it's probably the right time to start. Before trekking to your local grocery store, though, make sure to see where it's sold via Kellogg's store locator. If you can't find anywhere that sells it nearby, just request for them to send it to a supermarket near you. In the famous words of Brooke Shields, “You want to know what comes between me and my Unicorn Cereal? Nothing." That's how the saying goes, right?

If you're living in the New York City area, you can also find Unicorn Cereal at Kellogg’s NYC. It's the best place to purchase a box while the cereal is being rolled out.

Since I'm sure you're all dying to know what Unicorn Cereal actually tastes like, it's a sweet dessert-like treat, resembling the taste of cupcakes (and, of course, unicorn magic). The cereal includes red, blue, and purple Froot Loop-esque cereal pieces, in addition to little white sugar pieces. It sounds like this might actually replace my usual pizza-based light night snack, and there's no doubt in my mind I'll be having a hefty serving this weekend.

There's a chance you heard a little something-something about Unicorn Cereal last fall, when it was only available in Germany. Getting a box, however, was quite a feat, as it quickly sold out at Flake's Corner Cafe. Based on Instagram user Candy Hunting's photo of the box, it also appeared to have come in different colors from the new U.S. version. Although enjoying a box of magic abroad would have been swell, I'm thrilled that I can now kick back in my bed with a bowl, by myself. No travel required.

If you're still looking for new cereal to try, but you've already eaten yourself into a unicorn oblivion, make sure to check out Post Consumer Brand's latest creations. Their Chips Ahoy cereal sounds like a childhood fantasy, because there's no way you can go wrong with literal chocolate chip cookies in a bowl. Their Nutter Butter Cereal, on the other hand, captures the peanut buttery deliciousness of Nutter Butters — and just the thought of it makes me a little bit sweaty. Although I have yet to try either of them, I have extremely high expectations for both varieties.

If waking up in the morning is a real drag for you, I really think it's time to introduce Kelloggs' Unicorn Cereal into your life. You may turn into a magical fairy creature, but in my book, there's nothing wrong with that. If you'd rather remain an earthling, and you merely want to enjoy a massive sugar rush, check out Post Consumer Brands' Chips Ahoy or Nutter Butter breakfast cereals. Whichever path you take in the realm of sugary cereals, there's really no way you can go wrong.

More like this
These Cereal-Inspired Candles On Etsy Look & Taste Like Bowls Of Your Fave Breakfast
By Rachel Chapman
How Long Is Pepsi Blue Available? Don't Wait To Sip The Colorful Cola
By Cianna Garrison
AriZona Beverages' Sun Brew Packaged Coffee Will Perk You Up At Home
By Cianna Garrison
Stay up to date