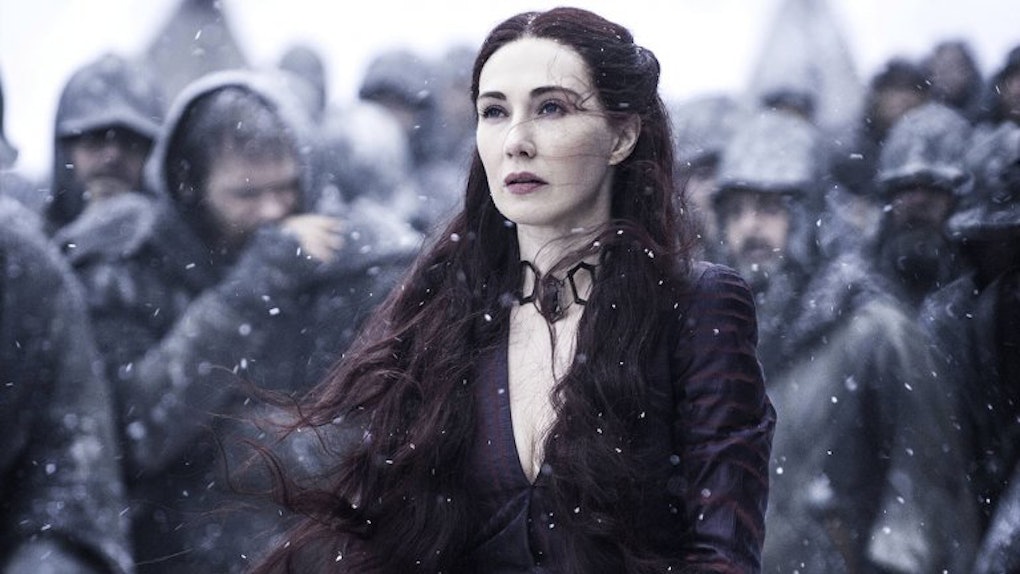 Where Is Melisandre In 'Game Of Thrones' Season 8? She Can't Be Gone Forever

It's been a long time since the Red Woman has been seen on Game of Thrones. Her last appearance was in Season 7 Episode 3, when Jon Snow arrived at Dragonstone to meet Daenerys for the first time. So much has happened since then, including the entire beginning and possible rupture of Daenerys and Jon's romantic relationship. At the time in Dragonstone, Melisandre didn't want Jon Snow to see her. He had banished her from Winterfell because she sacrificed Stannis Baratheon's daughter Shireen in the name of the Lord of Light. She said that she would leave for Essos, and apparently that's where she's been this whole time.

During her time on the show, Melisandre's main goal was doing the Lord of Light's bidding. That meant aiding in the discovery of The Prince Who Was Promised, who is supposed to save all of mankind. The Battle of Winterfell, which is coming up in Episode 3, will be a fight of the living against the dead. That seems like a perfect time for the Red Woman to reappear and provide some magical assistance.

The last time Melisandre appeared on screen, she was talking to Varys. She told him, "I have to die in this strange country, just like you," which sounds like a prophecy that predicts her return to Westeros. In an interview with Elle in 2017, Carice van Houten (who plays Melisandre) gave her predictions for how Melisandre's story might end. She said:

I have a feeling that she's tired. She's old, man. She knows what this world is about. That's what makes her powerful, but also more vulnerable in the end. But I think she's afraid of dying before seeing for herself that everything ends all right. Even if it means she has to sacrifice herself. That's my other theory.

There are going to have to be a lot of sacrifices in the Battle of Winterfell, since the Night King and his army post an immense threat to humanity. Jon Snow, Daenerys, and their armies can use all the help they can get, and Melisandre's magic has proven powerful in the past. Fire is known to kill White Walkers and wights, and fire also happens to be Melisandre's specialty, so that could come in handy if she returns to Westeros.

There's also the possibility that she'll return with reinforcements. In Season 7, she said that she was traveling to the city Volantis in Essos. Volantis has many followers of the Lord of Light, so it's possible that Melisandre rounded up several followers to join her in her mission.

Fans can see if Melisandre returns when the next episode of Game of Thrones airs at 9 p.m. ET, Sunday, April 28, on HBO.