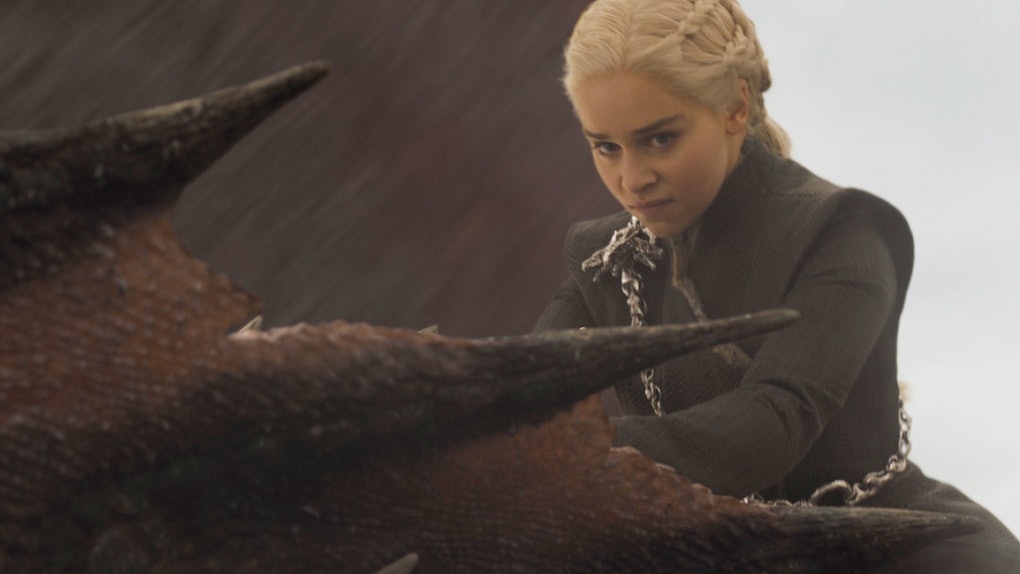 Where Does Drogon Take Dany? The 'Game Of Thrones' Finale Left Fans With Questions

The Game of Thrones series finale has finally arrived, and it definitely shocked every fan of the show. One of the most climactic moments came in the middle of the episode, when the story of Daenerys Targaryen finally reached its height. Spoiler alert: This post contains spoilers from the Game of Thones series finale. One of the lingering questions in the final episode is where Drogon takes Dany after her shocking death, so let's talk about that moment.

Fans have been preparing for Daenerys Targaryen's probable death in the series finale since the beginning of the show's final season. Although Dany was a fan favorite character and one of the protagonists — always seen as the most likely to take the Iron Throne for the bulk of the series — everything changed in Season 8. After Daenerys finally arrived in Westeros, she found herself on the outs with the citizens of Winterfell, and after seeing the people of Westeros love Jon more than her and learning that he actually had a better claim to the throne, Dany went on a fiery rampage to destroy all of King's Landing and the innocent people living there.

That murder spree won Daenerys the Iron Throne, but only for a moment, as it also shocked Jon Snow and Tyrion Lannister into seeing their new queen's true destructive ambitions. After Dany promises more wars under her queenship, Tyrion convinces Jon that he needs to put his love aside and do what is right by killing her. In their final moment together, Jon embraces Dany for one last kiss and stabs her in the chest while still lip-locked.

The death is clearly devastating for Jon Snow, but it also hits Daenerys' dragon/son Drogon immensely hard as well. After Drogon realizes Dany is dead for good, he lets out a grief-striken shriek and incinerates the Iron Throne, guaranteeing the nobody else will get to sit on the seat of Westeros' power.

But the very last time that we ever see Daenerys and Drogon left fans with one last looming question. After melting the Iron Throne, Drogon picked up Daenerys' body and flew away. Destination unknown.

So, where is Drogon taking his dead mother's body, and what is he going to do now that he is (presumably) the only dragon remaining in the world? Well, some later moments in the finale give us some clues, but Drogon's future remains mostly unclear. In the final scene of the series, Samwell Tarly mentions that Drogon was spotted heading east, but Bronn cuts him off before he reveals a specific location. Bran then mentions the possibility of warging into Drogon, but that is never shown either.

The fact that Drogon is heading east does seem to narrow down his destination to two most likely places. He may be flying to Daenerys' birthplace of Dragonstone, which is directly northeast of King's Landing, or he could be flying much further east to the Dothraki Sea. The latter option actually seems more likely, since Dothraki Sea is where Drogon and his siblings were born from Daenerys' fire, and it is where Daenerys first garnered her power as a ruler alongside Khal Drogo. But since the show purposely leaves Drogon's destination open-ended, fans can imagine wherever they want for Daenerys' final resting place.