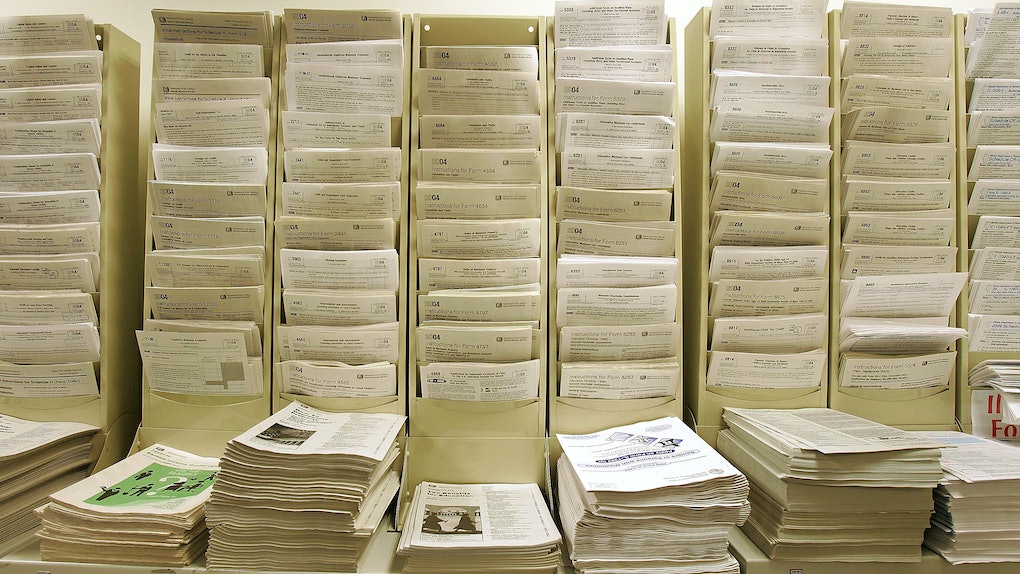 When Will I Get My 2019 Tax Refund? The Shutdown Might Affect It

With the partial federal government shutdown now going into its 34th day as of Jan. 24, the already daunting chore of filing taxes may have some taxpayers especially weary. The Internal Revenue Service (IRS) has been closed since the shutdown began on Dec. 22, but the period for filing tax returns officially opens in just four short days on Jan. 28. So if you're one of the many Americans still left wondering, when will I get my 2019 tax refund? Here's what you should know.

Generally, the IRS takes about three weeks to process returns filed electronically, and six to eight weeks for returns filed by mail, per online service TurboTax. But thanks to the government shutdown, things are very up in the air right now. The upside? The IRS says that it will be accepting tax returns as usual. "Individuals and businesses should keep filing their tax returns and making payments and deposits with the IRS, as they are required to do by law," the agency wrote in a notice updated Jan. 22. However, some services, like in-person and phone-in lines, will largely be suspended, so plan accordingly.

To make matters worse, The Washington Post reported Wednesday that hundreds of IRS employees on furlough who were called back to work won't be showing up to work — potentially meaning the agency will be short-staffed as millions of American file their returns starting next Monday. That might affect how long it takes to get your refund.

"The IRS is continuing its work in preparation for next week's filing season," an IRS spokesperson said in a statement to Elite Daily in response to questions about working calling out and the refund schedule. "We are continuing our recall operations, and we continue to assess the situation at this time." The IRS did not further address questions about whether the shutdown would delay refunds.

However, taxpayers who have opted for electronic processing should still get their refunds on time, experts reportedly told USA Today. Because of how the review process has been automated, the IRS recommends going digital wherever possible: use an electronic filing system rather than a paper one, and opt for direct deposit rather than getting a paper check. The IRS says this will help speed the refund process and minimize errors in filing.

For returns that are crystal-clear without any issues or complications, "those returns will go through fine and those refunds will be issued in the normal time frame," Kathy Pickering, executive director of The Tax Institute at H&R Block, tells USA Today. "Where people are going to have issues is if they need to interact with the IRS or something on a return needs further review." It's unclear how many taxpayers may potentially see a delay in refunds from the shutdown.

Taxpayers may opt for products like those in the TurboTax family, which simplify the complex process by explaining the terms, prompting you through questions, and reviewing the answers to help ensure you don't miss any crucial info before you file. They're not always free or cheap, but from someone who's used them before, they're incredibly user-friendly and almost impossible to screw up. Hot tip: Some of their services are much cheaper (or even free) if you file early and have a basic return form.

The IRS' official free e-file system is now up and running, too. There are different forms you can access based on your income level and while these may require a bit more double-checking on your part as the filer, they're generally cost-free.

Pickering recommended looking back at last year's return to see what documentation you might need this year so you don't accidentally miss a W-2 or a FAFSA form that causes a problem with filing your return.

The prospect of 800,000 federal employees missing a second missed paycheck on Friday looms large as the longest government shutdown in modern U.S. history continues with neither side appearing to make substantive progress on the impasse in negotiations over funding for a border wall. While two bills aimed at reopening the government are set to a vote in the Senate on Thursday, neither is expected to pass, and workers will likely face a full month without pay after missing a first paycheck on Jan. 11.

Though the IRS had preemptively called thousands of its furloughed employees back to work in preparation for tax season, the Post reports that many of those employees are taking hardship leave due to restricted finances that leaves them unable to put gas in their cars or pay for child care, while others are acting in "coordinated protest" against the shutdown. The IRS did not respond to Elite Daily's questions regarding employees taking hardship leave.

The bottom line: Given the complications of the government shutdown, it's probably best to play it safe. File digitally — and early — if you want your refund ASAP. But even at that, there's no telling how long it might take if the shutdown continues to hamper IRS employees from processing those refunds. So don't make big plans for that cash just yet.