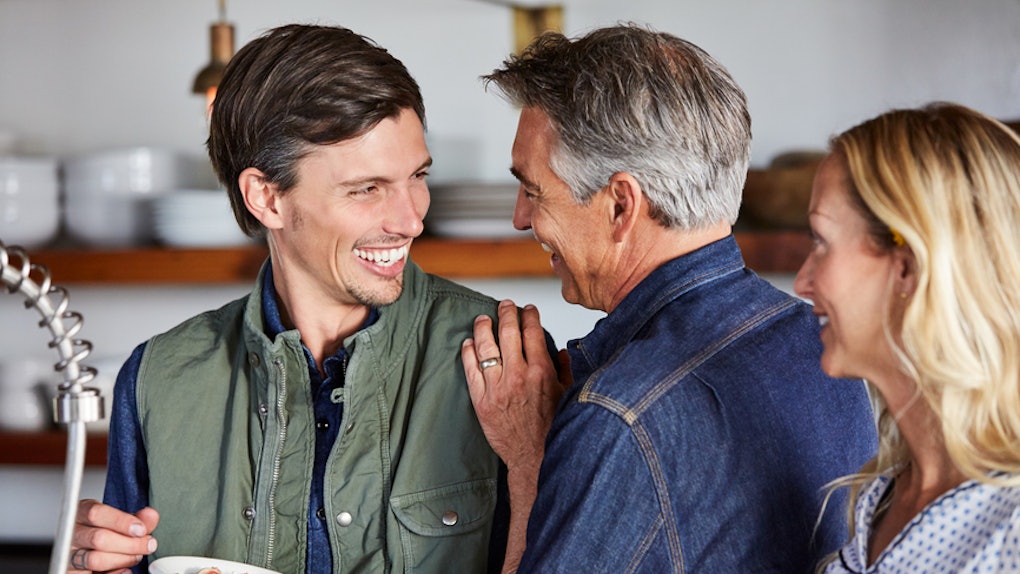 When Should You Introduce Your Partner To Your Parents? An Expert Weighs In

I used to feel like meeting the parents of the person I was dating was absolutely terrifying. What if they didn't like me? What if I accidentally (inevitably) dropped an F-bomb? Or even worse, what if I fell in love with them and then had to lose them in the breakup? While the last one has never really gotten easier (hey, sometimes you love the family more than your SO by the end), I have been able to conquer my other fears. Part of it was just repetition. Knowing how to introduce your partner to your parents is like anything else: The more you do something, the better you get at it.

While I may have mastered the art of meeting the parents through painful trial and error, the good thing is that you don’t have to. I reached out to dating expert and founder of Relationship Advice Forum, April Masini, to get her take on how to read the signs that the timing is right for introducing your SO to your parents. It turns out it's not as complicated as I made it out to be in my blundering parental meet (not-so) cutes. Here's how to be sure the time is right.

1. It’s All About Timing

When you are first dating someone, that new relationship energy can be powerful. You can be swept up in the honeymoon phase and feel like you’ve met the one before you even know who they are. All those powerful fee fees may translate into you wanting to introduce them to your parents right away. Resist that urge, says Masini.

Instead, give the relationship a solid six months to a year before you start getting your parents involved — and with good reason. "Anytime before that is too soon because the relationship is not clear," says Masini. "After six months of dating, you’ll know someone better and they’ll know you better — to the extent that you can both decide by then, if you want to be monogamous and committed to each other."

Because there is no sense in having your parents begin to form a bond with your partner before you're even sure you want to.

Have you met their friends yet? If not, then it's not time yet to meet the parents. Meeting friends first is important for a couple of reasons. For one, it’s a great test run to see how the people in your SO's life will react to you, but it also gives you some insight into how your new partner really feels about you.

Masini explains that meeting the friends is actually a bigger step than you might initially think. If they cant wait for you to meet their BFFs, "it’s because [they are] proud of you and of [their] relationship with you, and want to show you off and show off the fact that you’re together. When this doesn’t happen, it’s often because your partner is playing the field or not interested in a commitment," says Masini.

Sometimes the best way to know if it's time is to just trust your gut. If you've been dating long enough to know one another and feel confident that this is a person who has the potential to be a partner long-term, it's time to consider meeting mom and dad.

But this is more than just about feelings; it’s about concrete behaviors that indicate that this relationship is the real deal. Are you doing all the things that couples do, like planning vacations together, dropping cash on large mutual purchases, or — and this is the big one — planning to spend holidays together? Then, according to Masini, it's time to include families in the equation.

So folks, what have learned today? It turns out that while meting the parents is a big deal, it doesn't have to be scary. Don't rush in, but instead, look to the progress of the relationship to see when it's natural to take that next step. See… easy peasy.