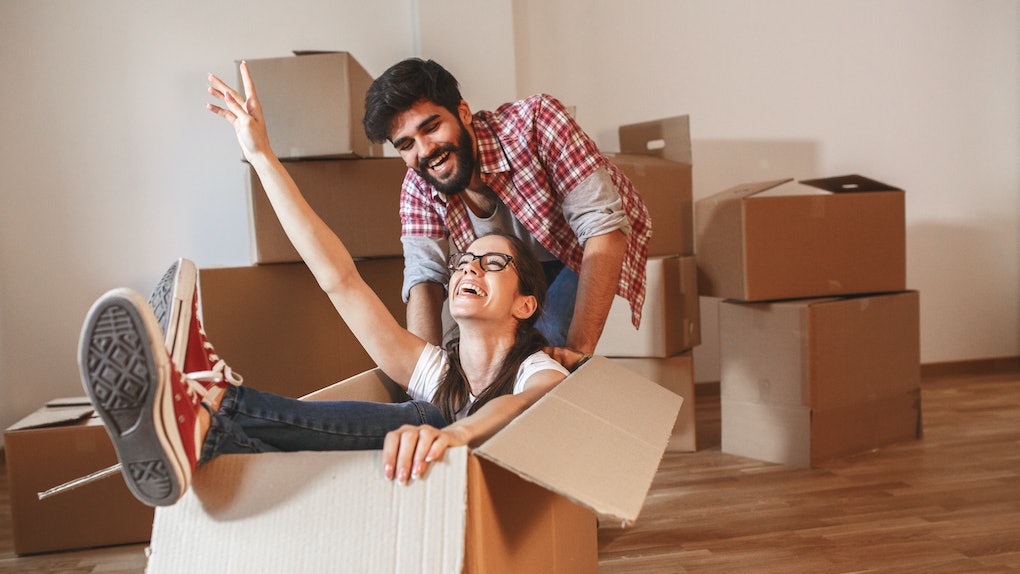 When Is The Right Time To Move In With Your Partner? 8 Women Reveal How They Knew

Relationships are full of steps. And one of those many steps is the decision to move in with each other. But when are you supposed to do that? In other words, when is the right time to move in with your partner? Well, in a recent Reddit AskWomen thread ladies explored that question by sharing all the deets on when they decided to move in with their partners.

After reading their responses, one thing becomes super clear: the question of when you should move in with your partner really boils down to the reasoning behind the move. As nice as it would be for rule-followers, like myself, to have a hard and fast number of requisite months or years to wait before it's "time" to move in with our partners, that's just blatantly not the case.

They were just ready for the next step.

Seven years. Started dating in high school, dated through college, got engaged and moved into our first apartment 2 years after graduation. It was just the right time for us to take the next step.Been married for 15 years, moved twice.

They were spending most of their time at each other's places, anyway.

Over a year of dating. We ended up spending more time at each others place, hardly at home. It just made sense after a while.

They wanted to live together before he got deployed.

Two years into dating, we moved in together for a few months bc he was set to deploy with the army and we wanted to cherish the time we had together. Lived in the tiniest studio apartment, slept on a futon. Got a free Christmas tree from the army and decorated it with lights and handmade ornaments. Ate ramen and frozen veggies all the time. It probably wasn’t the right time but it was what worked for us at that time in our lives. We lived in a bubble of love while I worked at a Dunkin Donuts for a pittance (I have a graduate degree).When he got back from Afghanistan, he had new orders and we moved across the country together. Moved to a brand new place where we only knew one another. I seriously credit it to the strength of our marriage, we really had to like each other to survive that first Alaskan winter. That, and the dog we got to keep me company when he was out in the field.Still together, now married, planning to have kids within the next year. And we added a second dog. Sometimes it’s not about the right time. It’s about the right person, and taking the time to make sure your relationship is right. We could have easily fallen apart so many times, but we built a strong foundation instead.

Living together bridged the gap of their LDR.

Dated suuuuuper briefly before we got engaged and then moved in together maybe 3-4 months since the day we’d met. We had fallen in love hard and fast and continue to be in love. And it was for logistic purposes too since it was the end of the summer and I had to go back to school for my last year of college. We lived an hour and a half apart before that so living together just made sense.Been married for almost 2yrs and we’ve got a baby on the way, so you could say, things have worked out! :p

They were both escaping their stressful family situations.

My boyfriend and I moved out of our parents house’s and in with each other about 6 months in. We both needed to move out from home due to stressful family situations.We we’re both looking for our own places when we met so we sort of just came to the conclusion after 6 months of dating and having no problems with each other we looked into places and found the place we are at now. Things turned out great and to this day we rarely have problems and continue to grow together.

They were ready to start a family.

We'd been dating for about a year and a half and during that time we'd spent almost every night together. We'd also gotten to know each other and were both sure we wanted to be together - permanently. We wanted kids and he moved in with me right after I got pregnant; sold his place (mine was a rental) so we could buy a bigger place together.That was 5 years ago and no regrets 😉

She needed a place to crash when she got back from study abroad.

We’d been dating about a year and a half. I had just come back from studying abroad in South America and I needed a place to live while I finished my last year of college. It worked out in the end because we’ve been married 6 years, together 10.

She moved with him when he started school.