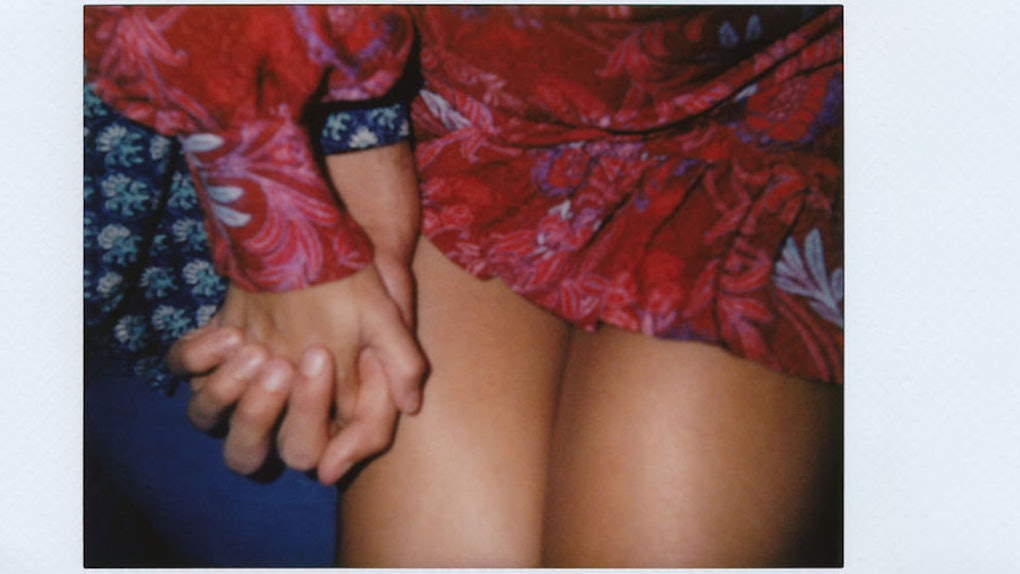 When Is It Normal To Start Holding Hands? 12 People Reveal When They Did, & It's So Cute

My first kiss came right after a long, sweaty hand-holding session. I was 15, he was 16, and we were sitting on a friend’s couch watching Armageddon. We didn’t kiss until the very last scene, but the entire experience was thrilling — only partly because of the film itself (even though it’s a really good movie!). I was nervous the entire time because I really liked him even though I’d only just met him the day before. Not once did I wonder, "When is it normal to start holding hands?" I didn’t care, I was just happy to be there with him.

What followed was a years-long saga of me obsessing over him and him not really giving a crap (boys), but I’ll never forget how happy I felt that day. Holding hands is a really sweet, really innocent way of showing affection, and it’s easy to associate it with being a kid and the tiny little love milestones that come with that period of life. Remember the first time you held hands in your first relationship? I wouldn’t be surprised if you did! It’s something you remember for the rest of your life, probably. Holding hands with someone is always the first physical step — the first thing that makes you think, “Oh, they’re into me!” It’s nice to realize that someone wants to be close enough to you that they can’t not touch you — that they want to be connected with you in some way.

But when is too soon to hold hands? Is the first date an appropriate time? The first kiss? What if, like me and Armageddon, you’ve just met? I took to Reddit to see what other people had to say, and if there even is such a thing as “too soon” to hold someone’s hand. Here’s what they had to say about their own experiences.

Some people didn't wait long at all.

We did it on the first date. Towards the end of the dinner we were having at the restaurant, we were leaning towards each other for a rather personal subject matter in our conversation, so that others couldn't hear us. I used that as an opportunity to grab her hand for the next minute or so. Rather than show confusion, she reacted with a smile. We had hugged when we met for the date, but I was super anxious to break the touch barrier in an 'I really like you' manner, and us leaning made me feel more confident, but still slightly nervous.

After leaving the restaurant, I held her hand again, this time without hesitation, and she proceeded to interlock her fingers with mine, clearly confirming that she liked it.

Near the end of the date, we also ended up kissing and then making out. We might have made out for over 2 minutes uninterrupted; sparks between us were off the charts, which I had never experienced to such an extent on a first date before.

Our first date was NYE in New York. It was cold so we held hands

This question is adorable. My SO it was date one, he grabbed my hand for stabilization and didn't let go. Still hasn't. My hands are still sweaty.

With my last girlfriend, it was the first time we ever hung out while getting to know each other. We were in a bit of an interesting situation where we'd met in person, then spent two weeks communicating only via text (facebook etc). So we built up a fair bit of romantic tension between us before we actually had the opportunity to get to know each other in person.

We were sitting/laying on the hill at uni when I did it. We'd spent about an hour talking and getting to know each other and she was in the middle of a story and she was getting very animated so she sat up and turned to face me. Her hand basically dropped right next to where mine was so I just... took it.

As soon as I did she looked surprised and completely lost her train of thought. It was pretty funny actually

First date with my SO. He took my hand and we didn't let go of each other until the next morning. It was the first time we had met (Tinder, actually) and nothing more than cuddling and kissing all night happened. I love that man.

Others gave it a few dates.

I think 4th date probably, possibly 3rd, he initiated it. I consider holding hands to be pretty intimate actually, so I'm not down with holding hands on the first date like some hand holding hussie.

I'm with you. Ours was on our fifth date. We'd had sex on the fourth.

Two dates. We were walking along the river, and she grabbed my hand.

We were close friends already, but we were still in highschool [sic], and I was super awkward; I had never had a girlfriend before that.

she grabs my hand

'...I've been thinking about doing that for the last three blocks'

Third date for me. We walked out of a little diner after talking about 'going steady.' I gently interlaced my fingers with hers, and we walked like that for the rest of the day.

It was actually really special for me, because I hadn't dated anyone for about two years, and my previous relationship was really awful.

I just realized that I take holding her hand for granted now, and I really shouldn't. Thanks OP!

And some people just did it when it felt right.

First date, been married 6 years now (and have a 2 year old). We just knew it was right at the time.

I've only ever had one. I held her hand a year and a half after first having met her.

Truthfully, if there's anything I've learned from reading these accounts, it that it doesn't matter if you're on your first date, or your fifth. You could be about to have sex, or you could be holding hands under a blanket to "I Don't Want To Miss A Thing" (heh heh). What matters is that you're comfortable with what's happening, and that the moment feels good. You don't have to put a timeline on any aspect of your relationship. Go with the flow, and follow what your gut (and your sweaty, nervous hands) tells you.